Hey everybody!
It probably hasn’t escaped anybody’s notice that tomorrow is the start of the Vigilus Weekender, a two day event at Warhammer World, where GW are going to announce “something big” for us all. Intrigued? Well, I am!

Vigilus Calls. The Imperium will answer…

This “something big” could, of course, be anything. I’ve been reading a lot online where people have suggested it could be the return of Abaddon, or it could be Marneus Calgar as a dreadnought, based on the teaser video GW posted yesterday. Frankly, both of those things could well be true, as it wouldn’t be a massive stretch of the imagination to learn that the Black Legion has shown up on the hotly-contested battleground, and given how sidelined Marneus Calgar was during the Dark Imperium novel, I think it would be so cool to see him come back as a relic dreadnought to really kick some ass.

I suppose the problem with that last could be that it feels like such a huge event, it should be in a novel. Calgar’s last stand, his heroic death and eventual reincarnation in the sarcophagus of a dreadnought – it’s too much to just bring out the model and say, “oh yeah, he’s in there now”. Maybe they’ll announce the tie-in book, though something just feels a little off about that. Sure, there has been a build-up for months now, with all the box sets coming out! But who knows?!

Abaddon and the Black Legion are a very safe bet, as it feels like the Blackstone Fortress stuff is going to be heralding a new age for Chaos. If we don’t get more Chaos Space Marines in the mould of those chaps from the boxed game, then I don’t know anything, anymore! I’ve talked about this extensively in the past, but I would love to see GW come out with a full Black Legion release, making use of the new minis as well as the Chaos Renegades such as Traitor Guard and Beastmen, with maybe some sort of campaign book rather than a full Codex. A Black Legion Codex just seems like a silly thing, to me. I am really excited to see how GW progress with the new models from Blackstone Fortress, however, so I’m probably talking about them a great deal because I’m just so interested!! 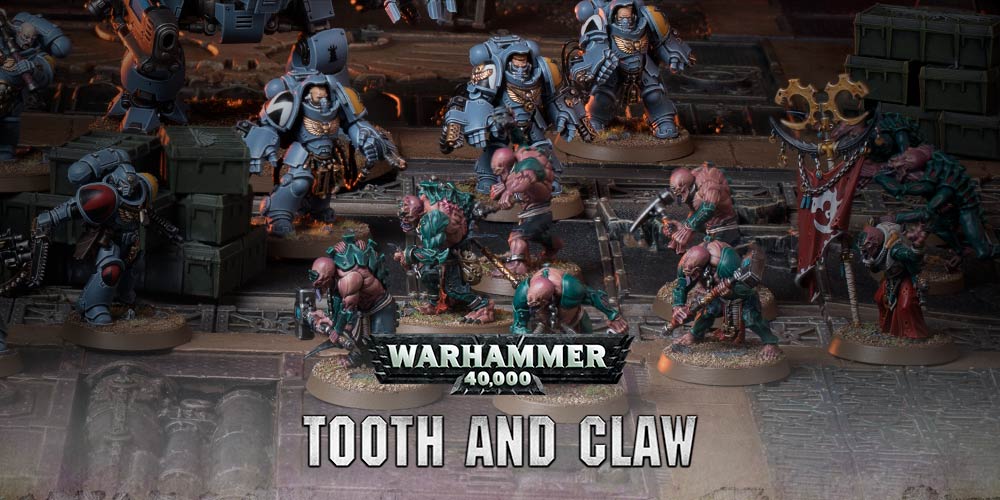 Personally, I would love to see the announcement of the Genestealer Cults Codex come out of this weekend. We know that they’re an active force on Vigilus, and while they have only recently had Tooth and Claw devoted to them, I would like to see this be a major thing to come out of the weekend. Preferably with a pre-order to boot! But between a Codex, the new Aberrant models, maybe the new Abominant, and of course the gunslinger Primus, this is a Codex release that would actually feel like a new army release once more. It’s the last of the regular Codexes from 7th edition to have the 8th edition treatment, so why not go out with a bang? We could even be seeing more new releases for the army that we hadn’t been expecting – I mean, who was expecting that Abominant?

Equally, I would love it to be something entirely out of left field, that comes as a complete surprise to us all. Codex: Dark Mechanicum, with a whole new line of models after the Negavolt Cultists!

But it’s most likely to involve Primaris Marines, so there is that…

Anyway! Whatever is involved this weekend, I’m just rubbing my hands with anticipation!

In other news, I’ve picked up my copy of Blackstone Fortress today, and have put together a little unboxing video in the way that I used to for these things! I haven’t made a youtube video for a while now, though that is at least partly due to the fact I was moving house so didn’t get a chance to keep going there. Might get back into it all sometime, once things calm down again! Of course, it feels like there are enough miniatures in the Blackstone Fortress box to keep me busy until Christmas, so I may have other things to occupy my time!

I’ve been busy building some units for the Ravenwing portion of my Dark Angels army that I talked about in some depth the other day, so I currently have the bikers from Dark Vengeance (that I eventually bought from ebay, as I couldn’t find my own – they were a nightmare to fix up, but got there in the end!) and a Talonmaster that was built out of a landspeeder and the Ravenwing upgrade sprue. I’ve also put together this little beauty:

I’ve had this kit for years, and have been recently on the fence as to whether to keep it or not, but having now built it up, I’m really chuffed that I did! It looks amazing, and I can’t wait to get it painted!

I’ve also been building AdMech stuff, which is exciting – I’d previously built a Tech Priest Dominus, but the model broke, so it’s nice to have another one to get painted.

While building both the Tech Priest and the Darkshroud, I was thinking about how amazingly detailed these models are, and how I really want to do them justice. So I’m really looking forward to getting started on them, as a little winter painting project. This hopefully won’t impact too much on the plans I talked about the other day, of course!!

Anyway, it’s been a busy time for building, and with the arrival of Blackstone Fortress, it’s going to be even busier! But I’m really looking forward to seeing what comes next from this weekend’s event!!

One thought on “Rampant Speculation, and more!”