Hey everybody!
After mentioning the idea in yesterday’s painting update blog, I’ve been thinking a lot about my ideas for a Deathwing army, and thought I’d come along here today to briefly talk about the whole thing. I’d last mentioned it on the blog here almost exactly a year ago, when the last thing that I’d done for the force was build up a Land Raider Crusader. I’ve not actually painted any of the models in the army since November 2016, however, when I was attempting to forge ahead with some Deathwing Knights:

So I do feel that I have a long way to go!

The Army Right Now
The current state of the republic so far as my Deathwing goes is as follows:

That is an elite, expensive list!! I’ve been quite excited by this army for a while, now, and I think the idea of it being such an elite force is a really exciting prospect. None of my other armies forgoes troops like this, although I suppose the Terminator Squads basically act like troops for the purposes of this list.

Who are the Deathwing?
For those of you who don’t know, the Deathwing are the elite First Company of the Dark Angels Chapter of Space Marines. The Dark Angels are a Chapter shrouded in mystery, and secrets-within-secrets is kind of their schtick in the 40k universe. During the Horus Heresy, it is widely believed in the meta that Lion el’Jonson kept back from Terra during the siege, as he wanted to see which way the hammer fell before fully deciding to join with Horus or keep to the light of the Emperor. Added to this fact, back home on Caliban the Lion’s trusted lieutenant, Luther, fell to Chaos and took a sizable chunk of the Legion with him – these are known as the Fallen, but the Dark Angels are determined above all else to keep the existence of these renegades from the galaxy at large. Very few know the story of the Fallen, and all of those in the First Company are within the Inner Circle of trust in this regard.

Nowadays, the Dark Angels regularly devote a portion of their strength to searching out for these renegades, in an attempt to make them repent or die. If any part of the Chapter suspects the potential location of a Fallen, they usually bring in the Ravenwing to deal with the situation – the lightning-fast Second Company. Should the presence of Fallen be likely, the First Company promptly come in to deal with it. 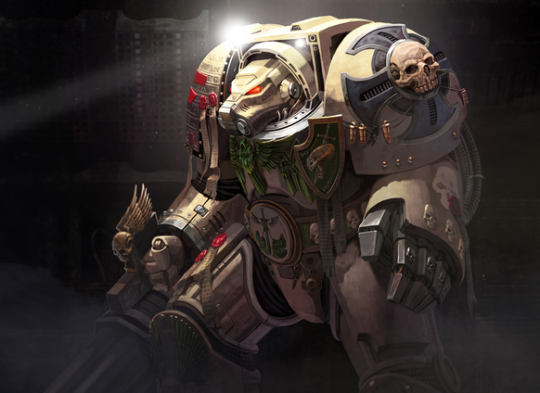 Side note: Ravenwing
The Ravenwing are the all-biker Second Company of the Dark Angels, and a force that I have not usually paid much attention to. However, since reading through the Codex for the Dark Angels, I’ve been considering re-vamping my entire list to include at least some of these guys in there. As I said, the Ravenwing are supposed to hunt for the Fallen, and when they confirm a location, they call in the Deathwing to teleport down to a planet and strike. I think it could be really cinematic to recreate that on the tabletop, so I’ll be giving that some thought in the coming weeks to see how feasible such an addition could be! I already have the flying church altar that is the Darkshroud, as I had been briefly considering using it as a part of the Deathwing army anyway, so I might include some more and plug any tactical holes in the list.

The Army Build
First Companies of Space Marines Chapters are the veterans, and as such almost exclusively wear tactical dreadnought (or terminator) armour. As such, there are a lot of Terminators in the list – pretty much everybody is wearing that stuff for the 2+ save it grants! While I still have some models that I’d like to add to the army, such as a second Venerable Dreadnought and perhaps an Interrogator-Chaplain, I am also in the curious position of having everything currently built and partly painted, so this is like none of my other current army projects to date!

It’s definitely a fluffy army, and I have no idea how well it would do on the tabletop. But my curiosity in that regard makes me want to try it out soon and see just how well (or not!) it fares! 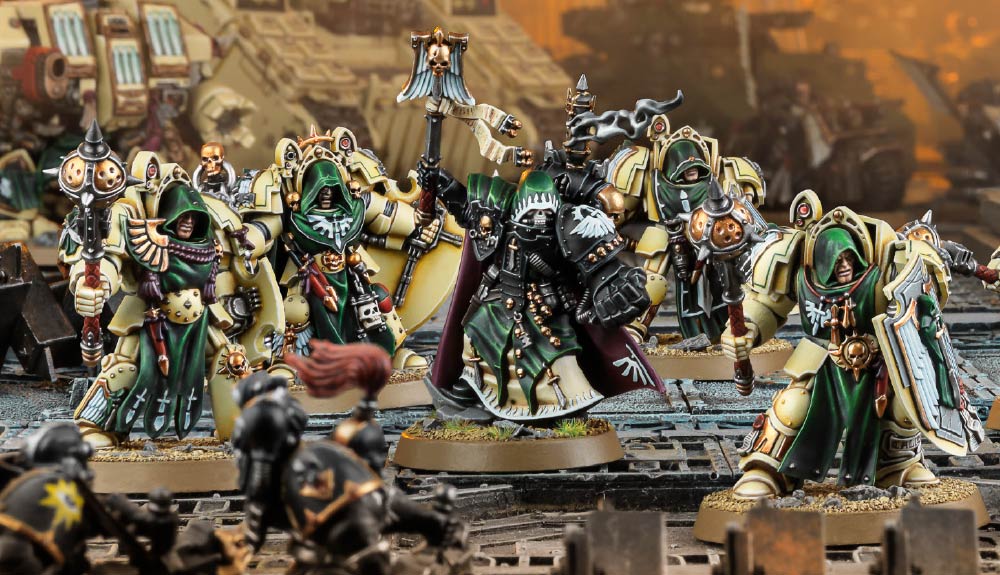 Tactical Thoughts
I’ve only briefly studied the new Codex, so there may well be a lot of things I’m missing with this, but some important linchpins for the force are Belial and the Ancient. Everybody in the force has the DEATHWING faction keyword, except the Venerable Dreadnought (and the Land Raider, though at 300 points, I’m currently leaving that thing off the list!) – Belial, as Grand Master of the Deathwing, allows for all friendly units within 6″ to re-roll failed hit rolls (as well as allowing for re-rolling hit rolls of 1 for all Dark Angels units within 6″ of him), while the Ancient gives all Deathwing units +1 Attack while they are within 6″ of him. While Belial is obviously a unique character unit, the Ancient will be useful to give those Terminators and Knights 3 attacks each, and the Venerable Dreadnought will gladly take that for 5 attacks, as well!

But the Venerable Dreadnought isn’t a DEATHWING unit, I hear you cry. Well, thanks to the ICP stratagem “Inner Circle”, he now can be! 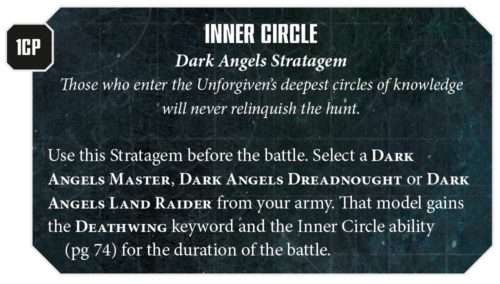 I may well build up another Ancient, as it happens, though that would be too much for the game and not enough for the fluff.

All of the Deathwing units also have the Teleport Strike special rule, which is the way they get to deep strike in 8th edition. There is a Deathwing Assault stratagem that allows them to immediately shoot after arriving by deep strike, which doesn’t prevent them from then shooting in the regular shooting phase, also! Very nice. I think the changes to the deep strike rule that prevent this from happening on turn one may have turned off a lot of folks, but I do like the dramatic idea of maybe using it for the Knights – I had briefly considered the Knights and Belial, but if it is used for a unit of more than 5 models, it costs 3CP – a hefty investment for an army that is quite light on the command points due to the fact it’s pretty much all HQs and elites! But it definitely fits that cinematic style if I do indeed go for the Ravenwing build, also!

The stratagems are generally pretty decent, I think – there are a lot of fluffy ones that only really come into play if you’re fighting Chaos Space Marines, and there’s a nice one that affects the plasma weaponry of a Dark Angels unit. Fluffy, for sure, though the Deathwing guys don’t really have many options for maxing out on such things to really make it worthwhile – again, this is a very elite army, with a maximum of five command points available to it as it stands, so I can’t really afford to go spreading the love too much!

From what I can see, though, there isn’t a tremendous amount of tactical ability within the units themselves – there are a couple of stratagems that will help, and a few aura effects that are useful, but in the main we’re looking at an army that is very much deploy and get on with it. Everybody is a Terminator, so has a 2+ armour save and 5+ invulnerable save, with at least two wounds each (Belial and the Master are the toughest infantry units with 6 wounds, while the Venerable Dreadnought has 8), so it should be a fairly durable force – as well it should be, for the points cost!

Building the army
I have an inordinate amount of love for the Deathwing Terminators kit. Ever since I built up my first Terminator (above), I knew that they were going to have a special place for me. I think the kit is quite remarkable for having three options within it – the regular Terminators, the Command Squad, or the Knights.

The way the Deathwing Command Squad has been broken up in the new Codex does mean that I’m somewhat at sea with my current builds – I actually have an additional Terminator with an assault cannon that I currently can’t home anywhere. I think I’ve got another box somewhere in the pile of shame, so I could always build up a third squad and maybe with the left-over model make either another Master or that second Ancient. It just feels a bit wrong to me that there would be two Ancients floating about with the company banner, you know?

At any rate, them’s my plans for the Deathwing army! It’s a force that I really love the look of, and have had a lot of fun painting them in the past, so hopefully that will continue as I move slowly towards completion this year! December is definitely Deathwing month for me, as I’ve done a lot with these models each Christmastime for the last three years now, so it will be nice to continue that tradition.

9 thoughts on “The Deathwing”