Hey everybody!
After talking more about the general boardgames in recent weeks, rather than bombarding you all with news of my hobby progress etc, I thought I’d come here and ramble for a bit about how it went with my Arkham Horror LCG core set campaign!

It’s been ages since I had originally started this, of course, and I had actually had to re-start so that I could once again get into the game and its various mechanics.

Had a fun time getting back into the Arkham Horror card game today – hopefully this time around, I'll make it beyond the core set!! #ArkhamHorrorLCG #FantasyFlightGames #Lovecraft #Cthulhu #games

So I took Daisy and Skids off on an adventure to save the world from a diabolical cult, and it actually went fairly well – my initial thought about two investigators causing more problems didn’t really pose that much of an issue, as there were also more clues being spawned and we got through the encounter deck a lot quicker, etc.

Time to save the world again! I've never yet managed to make it past the core set yet, so it's time to change that!! #ArkhamHorror #games @FFGames pic.twitter.com/o3SjOZfJj1

I must say, I’m quite surprised at the differences between this game and Lord of the Rings, which I’d recently gotten back into of course, and my approaches to them. Skids had pretty much been tooled-up to be the heavy hitter, while Daisy was scampering off investigating clues etc, but there is a distinct lack of enemies that require beating up for the Skids deck as I’d been building it to really work.

While there are plenty of monsters here, and that’s also true of the board game antecedent also, the game is less about combat than it is about, well, everything else! I quite like that about it, as I’m not really looking for a beat-’em-up style experience all the time.

For now, anyway, I’ve made my way through the core set campaign, Night of the Zealot, and while I’m sure at some point I’ll be investing in the campaign box they recently brought out, for now my attention has been firmly fixed on Dunwich. I’ve been putting this off for an age now, of course, but I really want to actually make it to the first cycle of expansions and just see what they’re all about!

My initial investigations have shown that it has no real link to the core set, so I have retired my Daisy and Skids decks, and instead have been looking to build decks with the new investigators from the deluxe expansion. This sort of thing does bring with it an interesting situation, as the investigators here have a completely different sort of limitation upon their deckbuilding, which involves a lot more thought than the core investigators, and just mashing together two factions into a single deck! Of course, I still haven’t made the leap for a second core box, so my deckbuilding options are a little slim as far as that goes, so I’m thinking I may well be buying that second box before Christmas gets here.

I’m very much looking forward to getting back into the whole card gaming world of LCGs this autumn/winter season, so stay tuned for more exciting updates!! 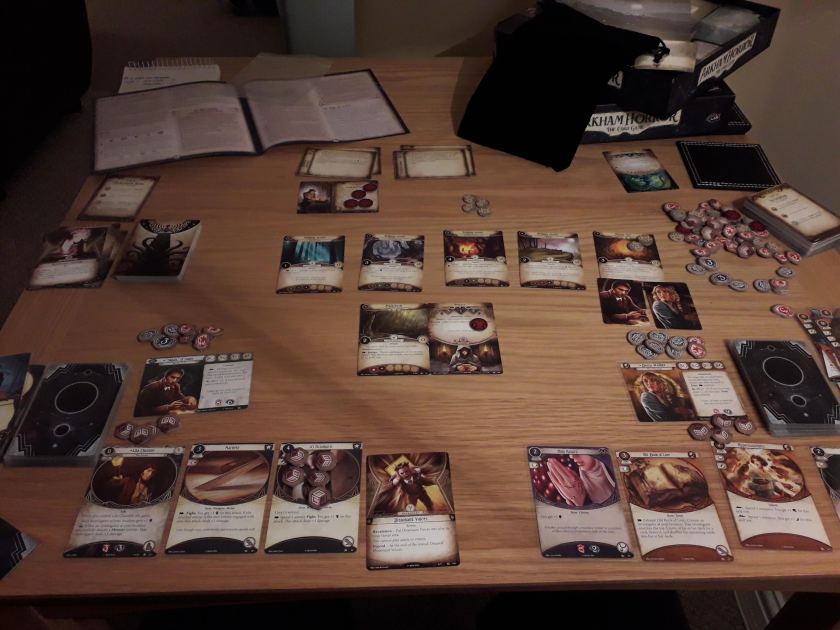 2 thoughts on “Getting back to Arkham!”