Hey everybody!
It’s been a Bank Holiday painting extravaganza for me this weekend! Having two days pretty much to myself, as the other half was in work, I’ve managed to make some amazing progress with clearing the backlog!

First up, I’ve added five more Immortals to my new Thokt Dynasty that I was talking about the other day, giving me now two troops choices, an HQ and an Elites slot, along with a dedicated transport. Hooray! I’ve bitten the bullet and listed a lot of my older Necrons on ebay this weekend, in the hope that it prompts me to really make the effort and paint my current batch of unpainted models. If nothing else, I really want to get the Catacomb Command Barge and a third squad of Immortals painted (tesla this time), and then I’ll have the first Battalion ready! That’s also going to be well on the way to my first list finished, so we’ll see how far I can get with that… It only took me five months to get round to painting these, after all! 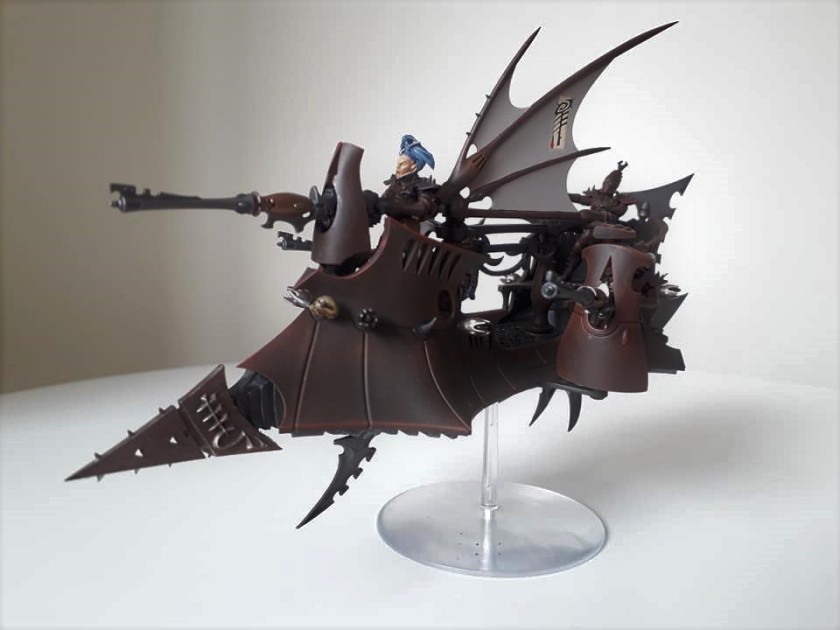 Much like last weekend, I’ve been painting a mixture of Necrons and Dark Eldar, my true 40k loves! This weekend, I’ve managed to get the second Ravager finished – something that, annoyingly, I’d been very close to for a long time anyway, as I’d done the main hull back in April. The crew are finished, though, along with the crew for the next Raider that I’ll be working on, so that’s a very positive step!

I’ve also finished off four infantry chaps, in the main because I had a game today and wanted to try out some different things! I’d built up all of these guys back in January, when I was building a lot of Dark Eldar as I was waiting for the Codex to drop, but have finally gotten round to painting them up. I’d picked the two blaster-wielding chaps to finish as I was painting the Ravager crew anyway, but now I need to get moving with another batch of Kabalite Warriors. I have a lot of these guys, as it happens, as I’d originally build up enough to get myself two full Battalions of pure Kabal. Then the Rule of Three came out, and without Drazhar, there aren’t enough HQs to now do this and keep the Kabal Obsession. So I lost interest in the idea, but have now started instead to think of either a Brigade with just three Archons (not even sure if that’s possible?), or else sticking with one Kabal Battalion but having a massive unit of Warriors on foot. I’m not entirely sure what I want to do yet, so we’ll see. I definitely want to get more of the special weapons peppered into my squads, so I’ll probably be working on some of those soon.

It may be nearly five months since I first picked this book up, but I have today had my first game with Codex Drukhari, and it was an absolute blast!

A chap at my local store was looking to try out an army list he’d come up with, but only at 550 points. So I set about building up a basic Patrol detachment, an HQ and two troops (ah, the old FOC!) all in vehicles: two squads of 10 Kabalite Warriors in Raiders, including a splinter cannon in one, and a blaster/agoniser in the other; in a Venom, the Archon (splinter pistol/huskblade) along with a Court of Lhamaean, Ur-ghul and Medusae. Obviously, I was playing Kabal of the Obsidian Rose, so had some pretty decent range on all my weapons.

On the Deathwatch side, there was a squad of Veterans, a squad of Terminators, and a Captain in Gravis Armour. As it happened, my opponent was as great at throwing dice as I was, so it all went quite well! Having nothing much to do against my army, as they were all in vehicles, it felt a bit one-sided, as I was able to shoot up the table from within my Raiders. I charged everybody out of the Venom just for something to do, though was quite impressed with some of the Court characters. I think I’ll look at using them more often!

While I don’t think there’s been much change between the Index and the Codex, the addition of Obsessions is definitely something that I enjoyed. I’ve been playing about with some list ideas off and on for a while, and having been initially very keen to start a Wych Cult this year, I’m leaning more towards the Kabal/Coven lists I used to play during the Index days. So I’m busily planning to paint more stuff to make it what I hope will be a decent enough list to play, so stay tuned there!

Summer Painting Update
So, since my last update on the three armies that I’d wanted to get a move along with, I’ve done very little of any of them! Earlier this month, I had started work in earnest on the Tempestus Scions, though that was primarily for Kill Team rather than the 500-point list I’d outlined here.

I don't think my eyes can take any more! But some great progress has been made, which is good – hopefully the team will turn out looking at least vaguely similar to the two chaps I painted up a year ago! #Warhammer40k #KillTeam #MilitarumTempestus #AstraMilitarum #TempestusScions #Imperium

The Scions haven’t advanced much at all since I took that photo, but I’m currently keeping them close on the painting table as I’m not going to write them off just yet. The Skitarii haven’t seen much of anything since I started vaguely working on the blue of the Dunecrawler back in June, either:

Back to this bad boy, going crosseyed painting silver filigree on the #OnagerDunecrawler for the burgeoning #AdeptusMechanicus / #MilitarumTempestus force!! #Warhammer40k #Skitarii

I blame the arrival of Kill Team and wanting to finish painting the Genestealer Cultists that I’d had one the table since way back when. Having finished a Neophyte Squad, I shouldn’t really complain, of course, but I’d really like to be further forward with a lot of these projects!

While summer may be almost over, I’m not going to be entirely writing off these goals just yet. I feel like I’ve stalled with the Tau, but I always get quite nostalgic for Necrons at this time of year, so I want to use that to get moving finally with my Great Reanimation. I also feel nostalgia for the Skitarii, so we’ll see how far I can get with those, as well! And I definitely want to paint up some more units for the Dark Eldar list I’m working on…