Hey everybody!
Yes, that’s right, the game is two weeks old now, and I’ve finally gotten round to playing it. I suppose, after seeing my facebook feed filled with posts in the 40k Skirmish Community page, it was time to actually see what the fuss was all about!

I took along a group of 15 Genestealer Cultists (not all of them painted…) and had an absolute blast, though was pretty badly brutalised in both the games we managed to play. That brings me to my first point, however: ordinarily, I play at my local GW for about 4 hours on a Friday evening, and games usually get to round 3 at the most. That’s probably due to the fact I play a lot of games against Orks, and have tailored a Drukhari list to be horde-based as well, but even so! Getting two full games in one night, as opposed to a bit of a game, is actually really good value for money, and I’m quite impressed!

My opponent was a chap called Kev, against whom I’ve played a couple of games, either with Tau or Necrons against his Deathwatch. This time, he was sticking with the power armour, and brought five Grey Knights. First of all, then, you can see that my force was three times the number of his, but if you know anything about anything, you’ll probably realise that Genestealer Cultists are pretty weak and pathetic, and really require that horde mentality to just drown an opponent in bodies. 15 wasn’t the maximum I could have taken, for sure, as I’m sure a pure Neophyte list would easily get to 20 models, but I’d allowed for just 11 of the regular chaps, alongside a Metamorph, two Acolytes, and a Purestrain. It was a fairly nice mix, I thought, but none of those combat-orientated gentlemen could make it across the table in one piece, and so I was pretty decimated, relying on just a single Neophyte gunner and the rest of my dudes to carry the day.

Unsurprisingly, the day was not carried!

See, not only are Genestealer Cultists physically weak in comparison to anything in power armour, but their weapons are also pretty terrible when talking about ranged firepower. I don’t think there was anything above S3 in my list! Trying to position myself to get unobstructed shots left me woefully out in the open in turn, so I could either risk being shot outright, or else I was hitting and wounding on 5s, which I’m not very good at doing!

The best moments for me came when I suddenly remembered, in my second game, that I had blasting charges on everybody, and managed to get one of them as five shots, though sadly all of the damage I ever inflicted all night was saved!

So I think Genestealer Cults vs Grey Knights is a really bad match-up.

Having started to paint some of these back when Deathwatch Overkill came out years ago, I've finally arrived at the point where I'm happy with these chaps. They're not perfect, sure, but they're a decent start to my #KillTeam 🙄 #Warhammer40k #GenestealerCult #NeophyteHybrids #paintingWarhammer #xenos #fourarmedemperor #GamesWorkshop #Tyranids

We played two games, as I said, and while we didn’t actually link them together as a campaign, I think the system in the book is actually a really nice way of implementing such a thing. There’s a lot of negativity that I’ve seen about the fact they’re selling dice packs with d10s “just for the campaign stuff that nobody is bothering with anyway”, but I think it’s currently too early in the game’s life to be saying such things. We’ve already seen the NOVA open stuff they’ve put out, and a flurry of posts have happened recently where local stores (my own, included) are going to be kicking off store campaigns from next month, which actually makes a lot of sense as we do need to get to grips with the actual rules first of all!

I'm really pleased with the progress on my cultists this time around! #Warhammer40k #GenestealerCult #KillTeam #NeophyteHybrids #paintingProgress #paintingWarhammer

I do love the new terrain that they’ve produced for the game, I think that looks really cool. While perhaps not as exciting as the Sector Mechanicus, it does nevertheless feel very grim-dark, and I have to say, I’m having a hard time not snapping up that Basilicanum. I’m getting married next month though, and would like to have some money left for the honeymoon… 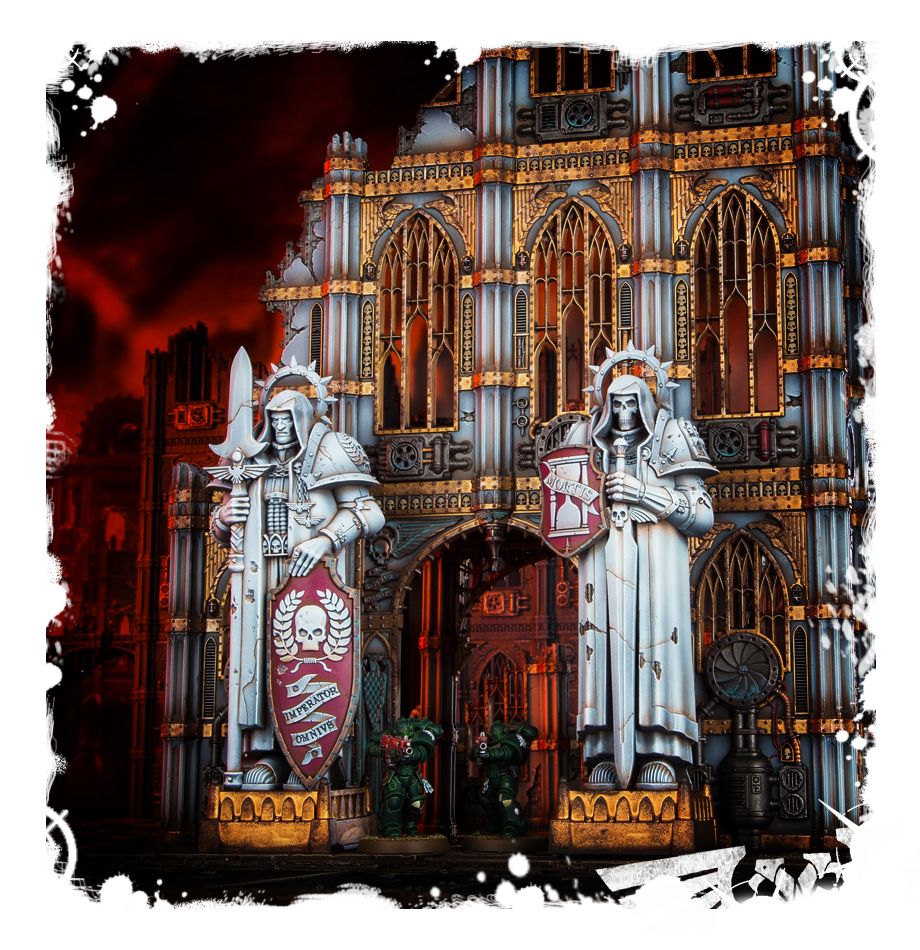 Overall, then, I think my first impressions of the game were really good. It doesn’t so much feel like just a small-scale version of 40k, but instead definitely has its own feel. The turn structure is slightly different, which did take some getting used to at first, but I actually think I prefer some things (charges in the movement phase feels about right, somehow!)

Squad building was something I wasn’t entirely sure I’d like as much as I have ended up doing. Having every single chap be his own man seemed a little daunting to me somehow, like it’s easier to keep track of a blob of models, but when each one has its own personality, it just felt like it would be too much. That’s probably one of the perils of having a larger team (that and Nerve tests… urgh…) Suffice it to say, though, once I’d gone through that Lithuanian baby names website to name all 15 members of my cult, I’d gotten into the process quite a great deal, and have since been planning similar adventures for more Kill Teams that I have on paper. Good ol’ fashioned English names for my Tempestus Scions? Damn right!

So anyway, I’ll leave you with the make-up of my Cultist kill-team as I played it last night – I think against non-power-armoured armies it might be a little more fun to play, but I’m also thinking of a few swaps I want to make to add a bit more oomph to the roster overall…

8 thoughts on “Kill Team – I finally played it!”