Hey everybody!
Just thought I’d share with you all some Summer Painting Updates, after having a fairly productive weekend with the minis! Unfortunately, I’ve yet to lift a brush to my Militarum Tempestus force, and the Skitarii have only vaguely been looked at, so this update will be purely based on the T’au part of my painting goals. 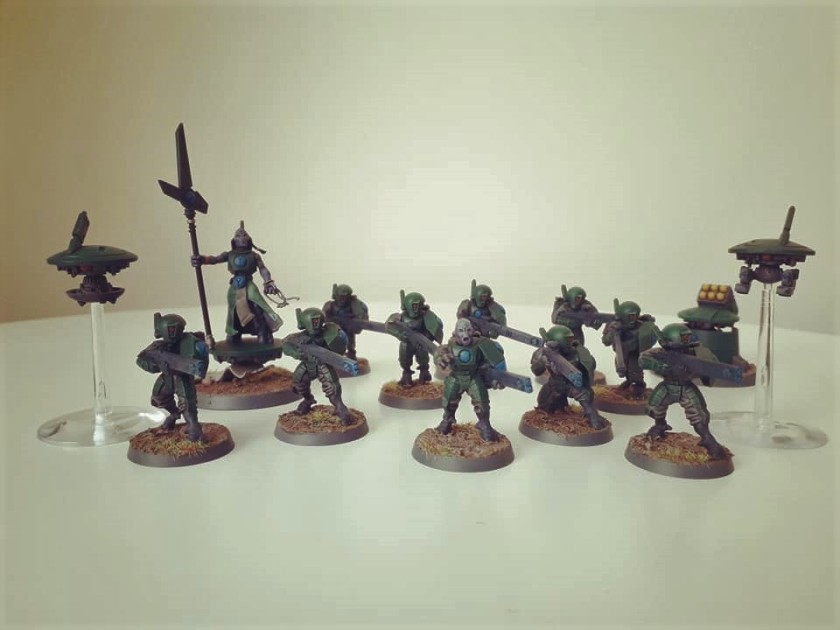 After exactly four months, I have finally managed to finish painting my first Fire Warrior squad! It feels like it shouldn’t have taken this long, but I guess it was a long slog trying to figure out the scheme, and then trying to work it so that I could paint things quicker than usual. I’d say that, once I got going with it, it wasn’t too long to get everybody done.

The drones are fairly quick to do also, I’m not trying to go in for a stunning standard with anything here, but very much trying to get them ready for the tabletop. So no glowing lens-effects, or anything! Though I have tried to get some vague glow-like effects on the ends of the plasma weapons.

Anyway, let’s talk about the scheme!

The armour is basecoated with Caliban Green, then drybrushed with Kabalite Green, Warpstone Glow, and a final highlight of Niblet Green. The fatigues are basecoated with Mechanicus Standard Grey, then shaded with Nuln Oil. I had been toying with drybrushing them with Dawnstone, but have decided against that.

The weapons are basecoated with Dark Reaper, then shaded with Drakenhof Nightshade, before a light drybrush of Thunderhawk Blue – not too much, just enough to help bring out the details.

The blue badges are all painted with Caledor Sky, shaded with Drakenhof Nightshade, and a light drybrush of Teclis Blue just to help brighten the details back up. I also then drybrush the ends of the plasma weapons with Teclis Blue, to give the effect of an active weapon.

Speaking of weapons, the Tactical Support Turret there is equipped with a smart missile system (at least, I think it is – I had thought at first it was the missile pod variant that had the bank of six, but given the missile pod for the Commander is just three warheads, I’m switching round!) When I was painting my Riptide over the May Bank Holiday, I’d decided to paint those with yellow noses, to both add some visual interest and differentiate from the missile pod, which I had painted red on the Commander. These are done with a base of Averland Sunset, a shade of Agrax Earthshade, then a light drybrush of Yriel Yellow. It’s almost maddening to try to paint these as neatly as possible, especially because the yellow will show up horrendously on the dark grey should I make a mistake, but they do look quite good, I feel! Such a shame that the smart missile system is the better weapon than the missile pod…

The skin of both the Shas’ui and the Ethereal is done using the classic T’au skin scheme:

The bases are then done with Armageddon Dust, with some Agrellan Earth dabbed on here and there. Once all that is dry, I shade the whole lot with Agrax Earthshade, then when that is dry, drybrush it with Terminatus Stone. I’ve still got some of the Burnt Grass basing flock from back in the day, so I then add a bit of that with PVA glue – Tau armour is meant to be camouflaged against the environment they’re in, so if I were painting a desertscape for the base, it should by rights be a more tan/ochre colour. Adding the grass helps to justify the green of the armour, but the red bits in the flock do help to add interest to the base overall.

So there’s my T’au army to date! I do need more drone support, and I do need to get moving with more troops as well, but I’ve actually started basecoating every battlesuit that is on my painting table with Caliban Green at the minute, so I should probably get a grip and stick to the plan! I’ve previously made a fairly decent start on some Pathfinders, so I think next on the list will be trying to get a squad of those finished, along with their accompanying drones.

Started in earnest painting up some #Tau #Pathfinders ready for a game of Shadow War on Friday! I don't think they'll be ready in time, but it's great to be painting again! #Warhammer40k #TauEmpire #ShadowWarArmageddon