Hey everybody,
The other day, I published a blog detailing my summer painting goals for two 500-point Imperium armies, which you can take a look at here. I mentioned having a third plan, for my T’au Empire army, so today I wanted to talk a little bit about what my plans are for this curious beast! 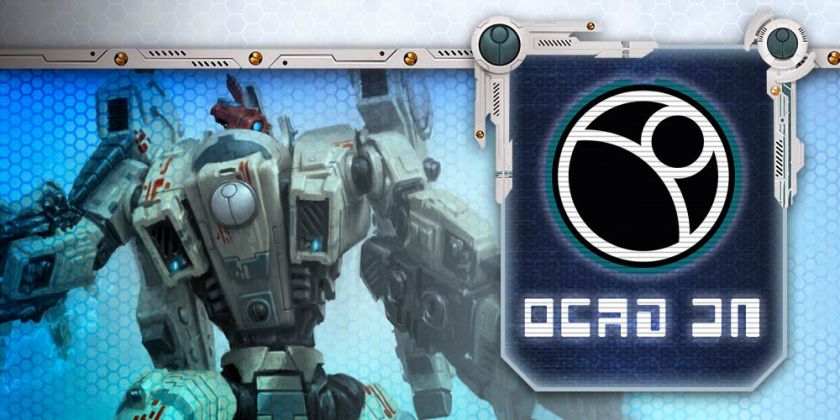 The list for my T’au is actually a 1000-point list, as I had written it with the miniatures I’ve already painted in mind. I’m still sticking with Bork’an, but I’m going for a 1000-point list that will provide a strong basis for future army builds. Anyway, enough rambling, let’s take a look at the list itself: 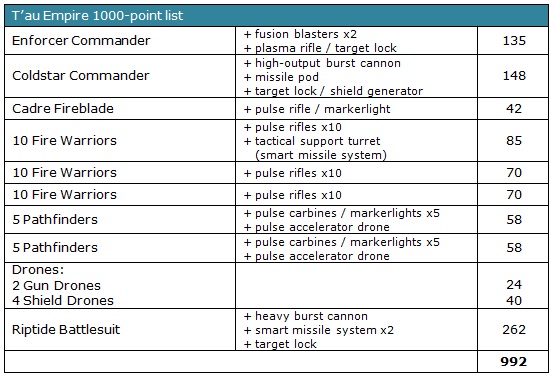 So this is a Battalion list with some added extra bits, mainly because I wanted to include the two models that I have fully painted, as well as some Pathfinders for the more accurate markerlights. Let’s talk about some of these units in turn.

Pathfinders are something that I talked about in my last blog devoted to the T’au, as I think the more accurate markerlights are a definite boon. I’ve since played a six-player game where I brought two squads of five Pathfinders, and they actually did some useful work. The biggest boon for bringing them, of course, comes from the Pulse Accelerator Drone, which I used in that game to fly back to support the main Fire Warrior gun line, rather than anything else, and between it and the Cadre Fireblade, it was a really beautiful thing! I have yet to try Pathfinders with any of their exotic weaponry, but I think when I look at building this list up to 1500-points, I’ll start adding in some of that.

Drones have so far been pretty hit and miss for me, so I’ve cut back significantly in this list. I like the fact that Gun Drones are buffed by the Fireblade, so have included a couple of them for good measure, but I’m sticking the shield drones along with the high-priority stuff like the Commanders.

The Enforcer Commander is something that I’ve only tried once, and the results were also mixed, so I think I should probably try him a bit more before talking about the joys of fusion blasters. The Coldstar Commander is still pretty great though, and as the first model I painted for the army, he does have a special place in my heart!

I think I'm going to call this chap finished! That was a long haul, but I'm pleased with him overall. Next up, the rest of the army… #Warhammer40k #TauEmpire #Tau #Coldstar #paintingWarhammer

The Riptide is a glorious miniature, and one that I’ve been really happy with since getting him finished. It seems that a lot of advice I’m seeing for building T’au armies is recommending the heavy burst cannon, so I’m pleased to have included that in the build. I don’t really have a big plan for him beyond distraction at the minute, but I’m sure once I’ve played a game with the guy, I should have a better idea.

The Riptide is finished!! I'm quite chuffed with him, as it happens!! #Warhammer40k #TauEmpire #Tau #Riptide #paintingWarhammer

Which brings me to the bête-noir of my T’au painting right now, the Fire Warriors! I don’t quite know how to go about painting these guys quickly enough that I can get a unit finished, but still to a decent tabletop standard. As such, they’ve been languishing in the partly-basecoated stage for a number of weeks now! Hopefully, I can get moving with them soon enough and get the production line sorted.

Finally, after what feels like an age, I'm getting some paint on my little blue men! #Warhammer40k #TauEmpire #Tau #FireWarriors #Ethereal #CadreFireblade

As an aside, the eagle-eyed among you will notice there are eight points left over from this list. “Why not throw in an extra Pathfinder?” I hear you cry. Well, because I’m also painting up an Ethereal on Hover Drone, and I’m thinking that I’d like the flexibility to swap out the Fireblade for this guy. Doing so would bring the list to 1000-points exactly, which is what I want!

So there we have it, the three lists for my summer painting goals. While this one is a little large for such a thing – 51 miniatures still to paint, including drones and turrets – I’m hoping that I can get a lot of them done fairly quickly once I have the troops scheme hammered out. Then I can focus on getting some games in with my actually-painted force!