Hey everybody!
I’ve spent what feels like a really long time so far this year, trying to motivate myself to paint the enormous stack of unpainted miniatures that I have lying around (seriously, it’s enormous). I’ve tried a couple of things to impose a sort of deadline on me, hoping that I can get something painted if I give myself a month, or give myself until the next game, but this never seems to work.

Well, it’s time to introduce the latest in this list of attempts to pick up a brush!

I’ve got a lot of armies on the go right now, don’t get me wrong, but I’ve drawn up 500-point lists for three of them, and so have decided to just paint the models for these lists. My thinking here is, if I only have 20 or so models to paint, that will be so much easier than staring down the barrel of 50 or more. They’re all battalion lists, so they should be vaguely playable, and I’ve gone a step further and chosen warlord traits and relics, so that they are as real as I can get them.

And I have to say, it’s actually working for me in some respects, as I want to field these armies right now, and try them out!

So let’s take a look at the first two lists… 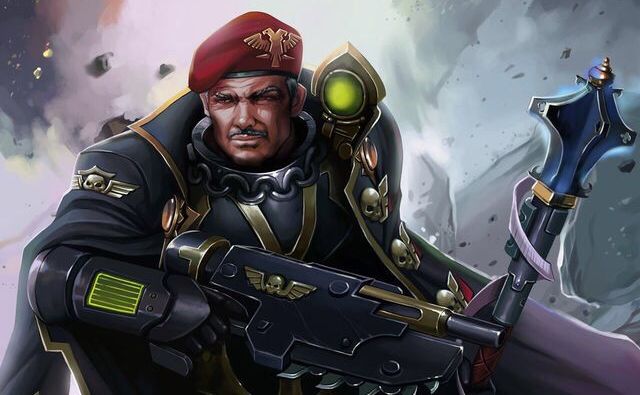 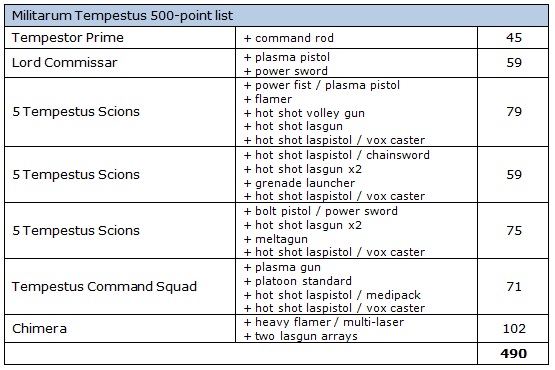 I’ve talked about this army a number of times over the course of my blog. See, it’s one of those armies that I’ve always liked the look of, ever since I first saw the miniatures, but have somehow never managed to get round to doing anything with. I mean, I’ve had the minis built and primed for well over a year now, but I just can’t seem to get myself into painting them! Well, I’ve painted precisely two models for the force in the last two years…

Months ago, I'd decided to paint up some #MilitarumTempestus chaps in the colours of the 55th Alphic Hydras, and have finally gotten round to painting some test models! I've tried to do them as quickly as possible, as I'm looking at painting up 15 of these chaps, but I think they've turned out really well!  #Warhammer40k #AstraMilitarum #Imperium #newarmy #TempestusScions

So I have a while to go yet, but this is definitely a project that I’m finding myself really enthused for!

The big theme across this merry band is getting the most from Voice of Command, relaying orders up to 18″ away thanks to all of the vox casters. I think my eventual plan for the full army will be to have two Tempestor Primes, each with a Command Squad, whose vox caster will act as the fulcrum of that relay. The relic I’ve chosen is the Tactical Auto-Reliquary of Tyberius, perhaps the most hilarious of names for such a thing, which allows the bearer to issue another order on the roll of a 2+.

It’s an army that I’m really looking forward to getting properly off the ground with, at any rate, so stay tuned for further updates there!!

Next up, we have the glories of my Skitarii! 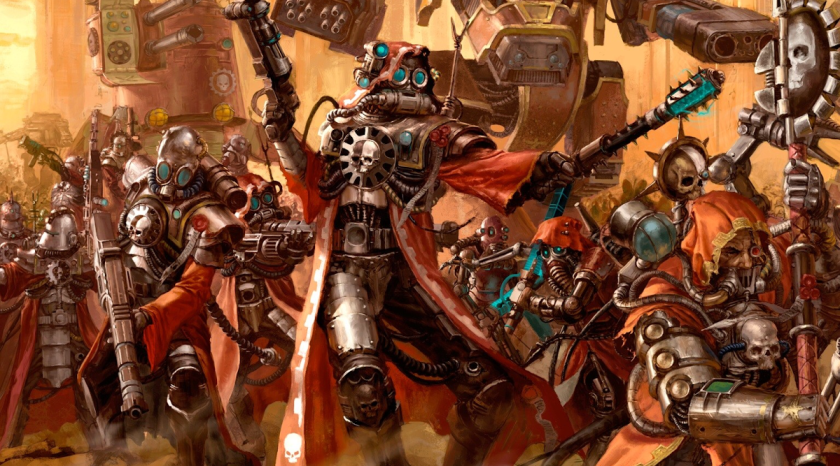 These guys have been on the radar for almost as long as the Tempestus Scions, after I bought the Start Collecting box on a whim. I’ve so far gotten further with these than I have with the Scions, however, having painted up a total of five models, but the list is a little different, with four groups of troops and a heavy support. There remains a fairly nice symmetry between the two armies, however, and I like the fact that I can put the two of them together when I’m finished, for a 1000-point Imperium army that, I feel, is nicely formed. 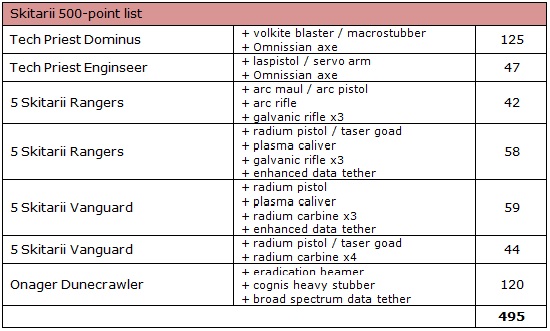 This list, however, proved to be the most difficult to write, predominantly because I couldn’t settle on a Forge World for it! My own painted efforts so far don’t conform to any “known” Forge World, having blue cloaks rather than the traditional red. (As an aside, I thought it a nice counterpoint, back in the day, that my Skitarii were painted predominantly blue, while my Scions were predominantly red).

Finished! I think they actually look kinda dark, but hopefully a swarm of these guys will look cool… #Warhammer40k #Skitarii #AdeptusMechanicus #paintingWarhammer

In the event, I’ve gone for Forge World Ryza, which allows me to re-roll 1s in the Fight phase. Hopefully, I won’t be getting into any fights, but it is nice to have that kind of back-up, just in case! As far as relics go, I’ve selected the wonderfully-named Weapon XCIX, which replaces the Dominus’ volkite blaster. I’ve therefore opted not to take the Ryza-specific Warlord Trait, which would kind of do the same thing as the relic, though you can’t stack both, so instead have picked Monitor Malevolus, which is the usual one that allows you to re-gain Command Points.

So there we have it, the first part of my summer painting goals! The third list involves Tau, but is a little more involved, so I think I’ll save that for a separate blog post.

Stay tuned for updates as the summer marches on!!