Well! This is certainly an interesting idea! Chapter Master Valrak has just posted up this video showing off some pictures of what looks like a new boardgame coming in the vein of Shadespire. I’m not entirely convinced on that one, but it’s still interesting to see something like this come out! 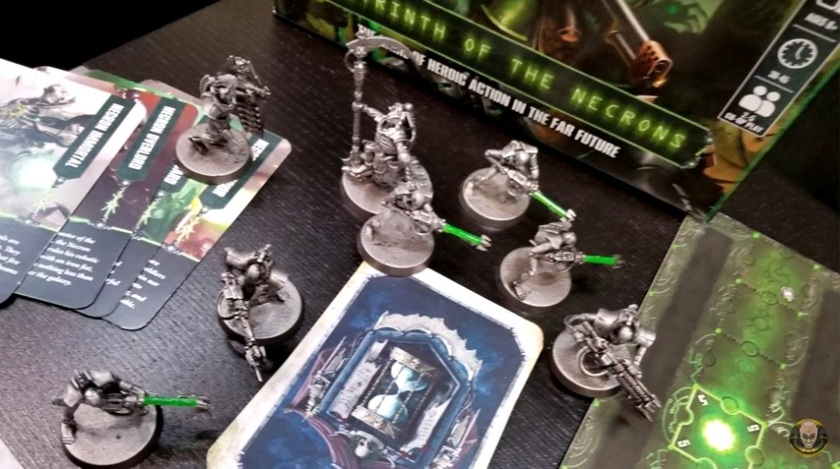 We have an Overlord, four warriors, two immortals and a lychguard, which is a nice warband of troops, better troops, a leader and his bodyguard. Looks like it’s card-based to some extent – those with the egg timer on them at the front there could be event-style cards? – and it’s either a tile based system, or else that’s a punchboard of tokens. I think the former, but anyway!

There’s also what looks like a Wraith on the box art, and it seems that space marines of the Salamanders variety will be involved, as well! Primaris or not, that would be very cool.

The reason why I don’t think it’s going to be like Shadespire is simply the name: it’s too specific. I mean, Warhammer Quest: Silver Tower refers very specifically to the Silver Tower of Tzeentch, so you’ll always be going up against the Lord of Change whenever you play that game. Shadespire, on the other hand, is a much more generic battleground where anyone can fight anyone else. Labyrinth of the Necrons can’t really be expanded to allow for Ultramarines to fight T’au, or Genestealer Cults to fight Skitarii. It implies the game will always see you going up against the Necrons.

As such, I think it’s much more likely this game will be more like last year’s Gangs of Commorragh, and will be a standalone box.

Which is great – I’m all for it, as I love this idea of Games Workshop being a real workshop of games!