Well, folks, I’ve managed to do some painting! Not a great deal, to be sure, and they’re hardly the best I’ve ever turned out, but I’m glad to have them at this point so quickly. I mean, the bases still need to be done, and I think I might go back and tidy up a lot of things soon enough, but still!

I’m painting the Cult of the Bladed Cog, which has an interesting backstory that is linked to the Adeptus Mechanicus. The story goes that the cult began on Feinminster Gamma and rose up when the Mechanicus arrived to harvest the planet’s bioelectricity – at least, that’s what the old painting guide for the Genestealer Cults had to say on the matter. The 7th Edition Codex explains that the cult apparently infiltrated the Mechanicus’ operations on Feinminster Gamma, which better explains the close relationship that appears to exist between the two – the red on the cultist armour and so on is evocative of the Skitarii of Mars.

I’m really enjoying painting these gribblies, I have to say. I think the Dark Eldar from last year kinda got in the way of my Genestealer Cult progress, as I’d been building up a bit of a force before moving over to the dark kin. But the cultists have always been there, much like their in-universe incarnation, biding their time and waiting to strike!

I’ve got a fair amount of Genestealer Cult models built up and ready for the paint to be splashed upon them, but as detailed last time, I’m trying to focus on just the small 500-point list to get somewhere first. My Astra Militarum detachment (to say nothing of the Tyranid detachment!) can wait for a while yet, I think… 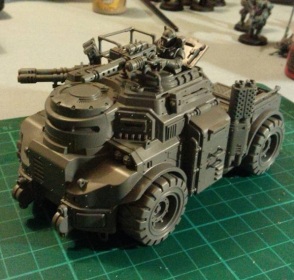 Building and painting isn’t all that I’ve been up to though, as I’ve been living in the Cult through this bad boy, also:

Finally getting round to this beast – firstcimpressions: excellent! #GenestealerCults #Warhammer40k

This book was released back during the autumn festival of Genestealer Cults in 2016, and I’ve been wanting to get around to it for a long time. I managed to read through it in the run up to Christmas, and I actually really enjoyed it! It tells the story of a group of “pilgrims” on their way through the galaxy, seeking religious solitude of the planet Redemption, which was the scene of a massacre of Sisters of Battle in the distant past. The pilgrims arrive, but are immediately drafted into the Imperial Guard regiment to help defend the planet against some vague, nebulous threat.

There is an air of mystery about the planet as the story unfolds, and we learn of the not-quite-human denizens who live in the civilian town near to the garrison. The story is pretty decent as it shares its secrets, before an explosive finale that sees the Cult of the Spiral Dawn rise up, even within the ranks of the military.

While I did enjoy the book, a cynical part of me was struck by just how closely it manages to tie itself into the Genestealer Cult range of miniatures, from the cultist models of the Magos and Primus (and even the Patriarch), to the Astra Militarum tie-ins like the Sentinel. Of course, the book was released in order to continue the hype, and whatnot, but it does exist as a decent enough read in and of itself. It’s coming out soon in paperback, as well (as Cult of the Spiral Dawn, fyi), so well worth investigating!