This isn’t really going to be a very long post, but it’s going to be an exciting one, all the same! See, I’ve been doing a bit of an inventory of my Warhamer kits that are waiting to be built, and while I’m continually shocked at just how much plastic I have waiting for me to get round to it, I think that everything I have is fairly necessary. I mean, of course, that I don’t really have an odd kit for an army that I don’t really collect. I have a lot of things that I’ve not really managed to properly do much of anything with yet, like Space Marines, and I have a lot of stuff for well-established armies such as Necrons and Dark Eldar. And I have bits and pieces for the combined Militarum Tempestus/Adeptus Mechanicus list that I’m working on, along with some pieces for a Genestealer Cults army that has been on my mind for about a year now…

It’s this last army that I want to talk about briefly today. I’ve got a bunch of kits, along with the stuff from Deathwatch Overkill, that has been in varying stages of completion for quite some time now. I know the colour scheme that I want to use, both on the mining Cultists and the guardsmen Cultists, and I have a vague idea for including a detachment of Tyranids in with them now that I’ve been delving into Index: Xenos 2, but it’s finding the time to work out a proper army list that is proving to be difficult right now!

So far, I’ve decided that I want to have a core of actual Genestealer Cultists for the army, and I’m probably looking at a Battalion detachment, given the number of HQ units that I’ll be doing for these chaps. My big plan is to then have waves of Neophyte Hybrids much like in the picture above, though on a much larger scale. I think I want to get at least two more boxes of these guys – to add to the one box I bought last year, and the contents of Overkill.

Incidentally – how good are the contents of Overkill for starting a GSC army?! According to my calculations, the total points cost for the models you get in the box, for 8th Edition, is 809 points. Now, that does assume a squad of 5 purestrain genestealers, and not the four that are supplied, but it’s otherwise a very good start to the army. I was initially a bit bummed that GSC don’t yet have a Start Collecting box for the faction, but I actually feel that Overkill is such a good place to start, it’s a lot better than a Start Collecting box will be. Though, you don’t get any transports in the boxed game, of course.

I then have a sort of secondary plan to use the Acolyte Hybrids probably in a separate detachment with an Acolyte Iconward. However, I found it quite interesting when working out the points values for the squad of Acolytes that I had built up last year:

The squad that I built up just over 12 months ago now works out at 106 points, by my reckoning – with the weapons forming almost half of that cost. Now, I have 5-man troop squads that have quite a high cost, and something I’ve been thinking about when building my Imperium army has been keeping the cost down in order to get more bodies on the ground, so I’m surprised at just how expensive these things can turn out to be.

The modular flavour of building a 40k army is something that I really enjoy, and drilling down to that level of precisely what I can kit out my guys with is always a lot of fun for me. Especially given how restrictive my first army, Necrons, can be! So I don’t think I’m ever going to go for a boring, basic squad, but I do feel somewhat bad about including such expensive wargear in just one squad!

(I’ve lost some of my miniatures in moving house, and currently can’t find the Neophytes that I had built prior to the move. Once I do, I’m planning to write up a proper “My First Genestealer Cult Army” style blog, so stay tuned for that!)

These #Tyranid #zoanthropes have got to be the most hilarious models I have ever had the enjoyment of building. I mean – look at them! So cute! With their little grins and over-extended brains! I love them! My new dream is a Tyranid army composed entirely of these guys! And maybe a Maleceptor. For added psychic-ness! #Warhammer40k

The Tyranid detachment is something that I’m very much looking forward to adding, as it’ll finally give me the impetus I need to get painting these chaps! I love the look of the Zoanthropes, and have been looking forward to getting them done for a while now. I’ve been thinking about adding these in a Vanguard detachment, just because there are more Elite units of Tyranids that I want to add to the army than anything else. I definitely want to build up my Maleceptor for the list, and add some Venomthropes (along with a Toxicrene in the heavy support slot). It would be more thematic, however, to build the list around a Broodlord and Genestealers, which are troops in the Index, so I suppose the idea of concentrating on a Vanguard because of the Elites really isn’t quite so limiting. 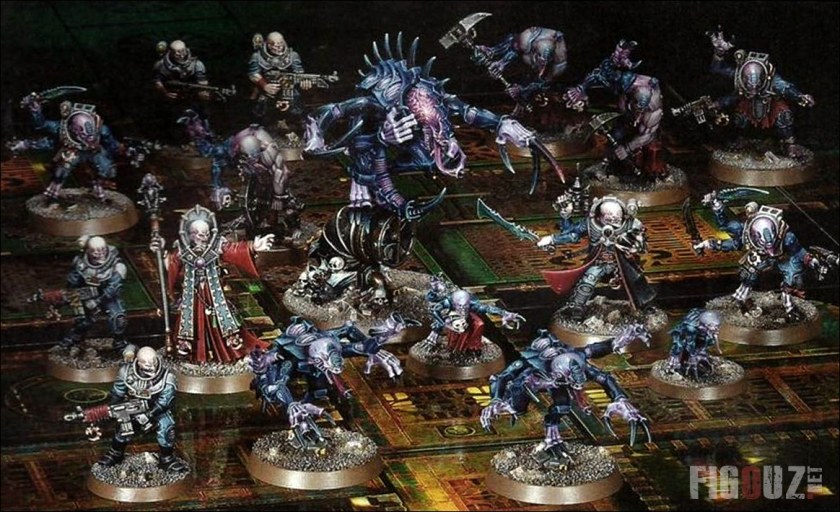 Anyway, I thought this blog would be a short one, but clearly not! Tyranids and Genestealer Cultists always intrigue me greatly around this time of year, so I expect to be talking about them more as the autumn goes on. Thanks for making it this far through the post, and here’s to the next 700!