Hey everybody!
It’s game day here at spalanz.com, and today I’m taking a look at the new expansion set for Magic the Gathering – hitch up your dinosaur, as we head to Ixalan! 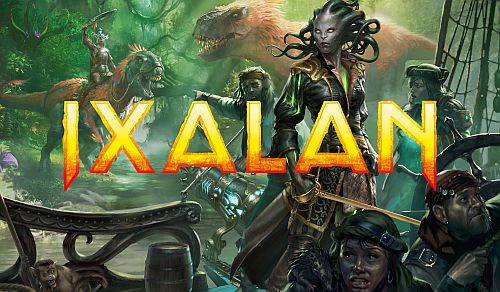 The 76th expansion for the game, Ixalan is a plane of dinosaurs and pirates, merfolk and pseudo-Mesoamerican exploration. We’ve known the name since at least April, when some leaked alternative packaging did the rounds, and the theft of an uncut sheet of cards not long after spoiled a lot of preview season for this set, but despite these leaks, I’ve been looking forward quite a great deal to this one. Amonkhet block was really nice, and I enjoyed a lot of those cards, but somehow I didn’t feel the theme really grabbed me as much as I expected. Ixalan, however, just seems to be speaking to me on a whole new level…

The story depicts the search for the fabled city of gold,  Orazca, and its legendary artifact, the Immortal Sun. There are four distinct tribes on the plane, with a lot of tribal cards for each that make this set feel like it slots nicely into this year’s Commander products! We have the dinosaur riding warriors of the Sun Empire (Naya), fighting against the Merfolk of the River Heralds (Simic), the Vampire conquistadores of the Legion of Dusk (Orzhov), and the pirates of the Brazen Coalition (Grixis). In the middle of all of this, we have the return of Vraska, posing as a treasure hunting pirate while she attempts to recover the Immortal Sun for Nicol Bolas (in return for Guild leadership of the Golgari on Ravnica). Jace is also here, naturally, although he’s once more lost all of his memories, and so is used by Vraska and the pirates as they fight against the Legion of Dusk.

The whole notion of this pirate/vampire/dinosaur-warrior/merfolk war has really gotten me intrigued, and of course I do have a soft spot for Mesoamerican history, so the whole package just appeals to me no end. Because the art… man, the art…

Tribal is obviously a thing on Ixalan, but let’s take a look at the new (and returning) mechanics. First up is Explore, which allows you to reveal the top card from your library, and draw it if it is a land. If it isn’t, you can put a +1/+1 counter on the Exploring Creature, then put the card drawn either back on top, or into your graveyard. Enrage is a dinosaur ability that has consequences whenever the creature is dealt damage. Raid is back from Tarkir block, but with some slight differences (including as an ongoing effect), and Vehicles are back from Kaladesh. Wasn’t really expecting to see either of these so soon, especially Vehicles, though it’s always cool to see old stuff brought back. We also have double-faced cards that transform into lands, which have card frames that look like old maps. While I do like this, part of me still gets a bit annoyed when Wizards messes with the frames too much. But not enough that I’d want to quit the game or go onto an extended rant about it, of course!!

Dinosaurs are obviously a marquee creature type for the set, and several older Lizards are being retconned as the Dinosaur creature type, which is nice. Ixalan has also given us our first and, so far, only Trilobite, and has brought about the rules change that makes Planeswalkers Legendary now, removing the Planeswalker Uniqueness rule in favour of keeping things a little more sleek.

I’ve been planning to use the vampire cards in my Edgar Markov deck should any decent ones present themselves, anyway, but when I learnt that Merfolk were moving into blue-green for this set, it made me want to make a Merfolk deck as well! I’ve never really been as keen on Merfolk as some, but I love the Simic combination (it’s one of only two places I enjoy playing green), so it’s natural I’d be drawn there this time!

I didn’t make it down to my store for prerelease, unfortunately, but instead had a sort of mini-prerelease of my own at home. I’d decided to go into this set pretty much blind, not paying attention to anything beyond the major spoilers when they hit. However, knowing the tribal theme, I had vaguely wanted to try out that Merfolk idea if I had enough cards for it. When I discovered Deeproot Champion as my promo, I had high hopes, but in the end it was B/W Vampires that leapt out at me, and so that was the deck I built:

Enchantments
Mark of the Vampire
Revel in Riches
Raiders’ Wake

I was going for a bit of an aggro deck, which would be bolstered by having a lot of Vampires out when Bishop of the Bloodstained arrives. However, I think I had been going for theme more than anything, and only managed to win one game with them out of the three. My regular gaming buddy made a bit of a janky red/green dinosaur thing that ended up just smashing my face, when all I could do is get out vampire tokens. Hm!

There are some really cool cards in Ixalan, however, and more than many recent Magic sets, this one has got me desperate to be playing more of it once again! I’ve already been looking at upgrading this to a better, 60-card deck for Standard (stay tuned for that) as well as getting some more of the better Vampire cards for my Edgar Markov Commander deck (stay tuned for that, as well!)