Hey everybody!
It’s game day here at spalanz.com, and this week is the first in a two-part series that takes a look at a pair of fairly similar games from Fantasy Flight, tabletop wargames that use a hex-based map the players fight over. This week, we’re going to Westeros! 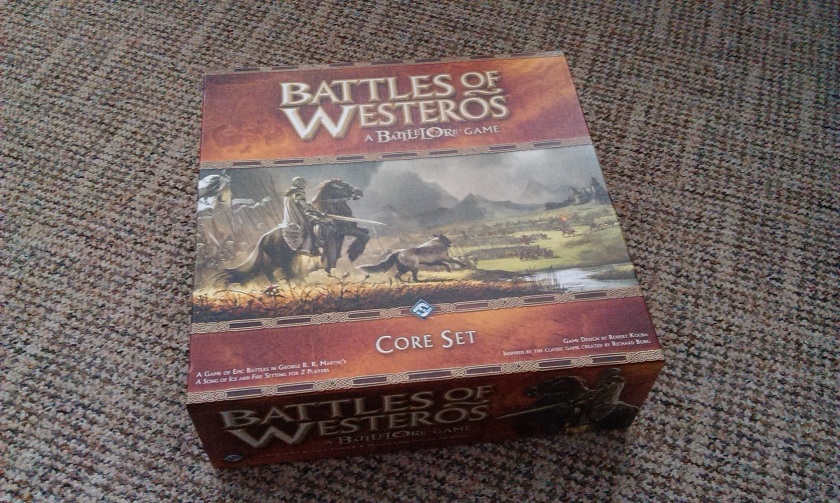 Battles of Westeros was published in 2010 by Fantasy Flight, as “A Battlelore Game”, and uses a lot of the mechanics from the earlier, fantasy-based game. Set in the now-iconic universe of George RR Martin’s A Song of Ice and Fire series, players take the armies of Stark and Lannister to bloody combat across a series of scenarios that recreate some of the climactic battles of the novel series.

The scenario-based system means that you get to play different games each time you play, as the victory conditions are always changing. There is, of course, also the option of a Skirmish game that allows for less-prescriptive games. The system is fairly straightforward, with one side needing to secure objectives and such, and the gameplay tends to be uncluttered, allowing you to focus more on strategy than rules.

Each game round has four phases: rally, order, marshalling, and regroup. Rallying the troops is basically refreshing all of those units that have acted already in your last turn. Ordering the troops is where you dish out the orders for the coming battle; Marshalling is where those orders happen, such as movement and combat; and finally Regroup is the cleanup step where you check for victory and the like.

The army you choose will give you a choice of Commanders you can play, as shown above. Commanders have some powerful in-game mechanics, and always come with a group of bodyguard units. Jaime Lannister comes with Lannisport Guard, for example, so he will take up one slot in the Guard’s grouping when deployed. His abilities, however, will usually affect the whole army, and not just the army unit he’s with. For example, Commanders have a one-use “commit” ability that is quite powerful, but can only be used once in the game before the card is flipped over. Jaime’s commit ability affects all of the units adjacent to him whenever he captures an enemy Commander, while his regular ability only affects the unit he’s in.

In addition, Commanders come with a suite of Leadership cards that are added to your deck at the start of the game. These Leadership cards form something of the meat of the game. Usually, a card will have one ability that will require you to spend tokens to use them (Jaime Lannister has three such tokens to spend per turn, denoted in the bottom-right of his card). These cards are used during the Order phase to give your army direction for the coming turn. The Commander’s Leadership cards, however, have multiple choices on them, providing for greater tactical flexibility over the course of the game.

The combat system is notable for using 8-sided dice (a precursor to X-Wing). Each unit is colour-coded, from the most basic infantry troops (green), to the middle-guys (blue), and finally the elite units (red). There are more green symbols on these dice than red, naturally, and in order to roll a successful hit against a unit, the dice need to match that unit’s colour. Additionally, green units roll 2 dice, while red units roll 4 dice, so while it is possible to defeat an elite unit with your chumps, it can be a slog. However, it is also possible to roll a Valor symbol, which is a bit like a wild card and will cause a hit no matter what colour of unit you’re attacking. Of course, the very chumpiest of infantry have a further restriction that denies them this ability, but it does mean you have more of a chance than you might think.

The dice also have the potential to cause Morale hits, which force the unit to retreat one hex. this can be important as some units can Counterattack if they survive the first round of melee combat. When hits are resolved, one model from the unit is removed for each hit, so you can potentially wipe out a unit, which causes a Morale loss for the army overall. If your House’s morale gets too low, your army will flee the battlefield immediately. Importantly, Commanders are not removed as casualties in this way, but instead have a “capture rating”, denoting the number of hits that must be done to them in a single round of combat once all other models in the Commander’s unit have been removed as casualties. Captured Commanders are removed from the board, and their abilities can no longer be used.

Battles of Westeros is a really fun and engaging game, and will appeal especially to fans of the books looking to get something deep out of a board game. It does use a lot of elements of the traditional war game, of course, such as morale and line of sight, and games tend to take around 2 hours to get through, so it will likely appeal to pretty dedicated folks! I had a lot of fun playing this game back in the day, though as other games have taken over my game nights in recent years, its long set-up and play times meant that BoW became relegated to the point where I eventually sold it all last year. Which was a shame, as it’s a really great game.

The game has been kinda languishing in FFG’s inventory for a while, however, with no new expansions since 2012’s House Baratheon box. While they have launched the LCG in a second edition, I think Cool Mini Or Not’s upcoming miniatures game will likely mean that Battles of Westeros has seen its time in the sun…

One thought on “Battles of Westeros”