Not too long ago, I had my first game of Warhammer 40k 8th Edition, so thought that I’d ramble about my experiences for a bit in today’s game day blog!

I’ve been loving 40k for a long while now, but the arrival of 8th Edition last month really has me firmly on that path now. I’ve previously talked about my experiences playing 7th Edition here, as well as my first impressions on the new edition here, so it might be useful to take a look at these blogs as a bit of background!

I played a game of roughly 40 power against Orks, having arranged the game with a guy at my local GW. Having only played against Imperial Guard in all of my games of 7th, I was really excited to see what was in store for me! I’ve heard the tales of Orks from watching bat-reps around the internet, of course, and was prepared for waves of the greenskin menace and bucketfuls of dice, but it was really cool to see what was in store!

(Again, I didn’t have my phone with me, so couldn’t take pictures, so there will be some generic indicative stuff on offer!)

My list shows off my usual love for Lychguard, though coming in at 8 power per squad, they are a bit of a points-sink. I had an Overlord leading two 10-man Immortal squads, both armed with gauss blasters. One squad of Lychguard were armed with warscythes, and another with hyperphase swords. To round things out, I also included my squad of Wraiths. In total, I had 45 power.

Robin’s Orks consisted of two squads of twenty Boyz, led by a Warboss, along with a Weirdboy, a Painboy, and two Killa Kanz, for a total of 40 power.

The game started fairly sedately, as I moved one squad of Immortals up the field and shot at the first squad of Boyz, but only managed to get rid of one of the buggers. Orks turn one saw the Weirdboy use Da Jump to move the second squad of Boyz almost to my table edge, which allowed them to charge into one of my groups of Immortals that turn. However, these Immortals were also very close to my Lychguard with scythes, and as luck would have it, I was able to start laying into close combat with them from my turn two. 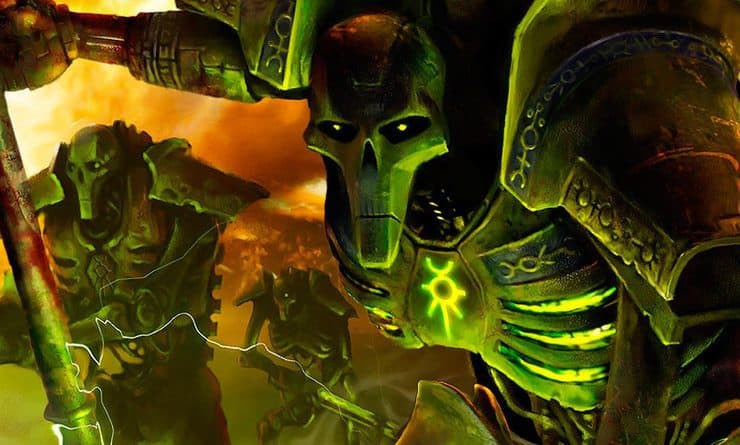 Indeed, sensing the desire to be in close combat early from the Orks, I basically allowed the army to come to me, and while it would have been more useful to have had more Lychguard on hand to start slicing up the big fungus creatures, I think it was still good to see how the army worked. I charged my Wraiths across the board into the first group of Boyz, who were by now in combat with my Immortals, and the centre of the table quickly became a gross tar-pit of metal and green.

In the event, my Lychguard were quite effective at carving up both squads of Boyz, and despite the Killa Kanz killing my warlord, he was avenged when one remaining Lychguard with a warscythe managed to carve up one of the Kanz, which caused the other one to run away! I’ve said it before, and I’ll say it again: Lychguard are amazing! Both as a kit and on the tabletop!

So what are my thoughts?

Aside from Lychguard being awesome, I think the main thing for me is to not really bother with large units for Reanimation Protocols. The way this rule works now initially prompted me to automatically think of max-strength units (which is still only ten models for Immortals, Lychguard, Deathmarks and Praetorians – the only Infantry models I like). However, while it is undoubtedly useful to think of it like this, I had two ten-man Immortal squads which were tied up quite quickly in close combat, and so were basically neutered early on. Having a lot of smaller squads carefully positioned should at least allow me to have some models that can shoot, as even a green horde can’t tie up every single one!

While gauss has that wonderful -2AP, I think I want to invest in some more tesla Immortals, as I think the hit rolls of 6 becoming three hits could be really good. Indeed, I think I want to do more with tesla in general – that Annihilation Barge should really be finished off soon!

I tend to go for a lot of Infantry in all of my army lists, as I enjoy having miniatures in a miniature wargame. However, I think it might be tactically prudent to include a healthy dose of other things – the aforementioned Annihilation Barge being a case in point. Necrons don’t have a great variety of stuff, of course, but I think I want to do more with the Catacomb Command Barge. Depending on how vehicle-heavy I go, I might try to get more Canoptek stuff such as the Spyder into the list, also. Against horde armies, I don’t think the Doomsday Ark is going to be much use, though for pinpoint destruction it could be fun. The Triarch Stalker looks like it could be good, too – expensive, of course, but I’m also thinking about getting that model finished soon. I’m certainly looking to change up my lists a little – though I’m doubtless going to keep a core of Immortals and Lychguard because these units are my favourites!

Army-wide Leadership 10 is really useful for the Necrons. Even when my Lychguard were being picked off one at a time, nobody was running away. The new way of working out to wound rolls was so much better than 7th -I was still having to check the toughness of the Orks I was hacking apart, but I think it went to much quicker than trying to remember that bloody chart from the last edition. It may just be me being thick, of course! But I think this is a hallmark of the new edition – certainly, as much as I can make such a statement after only one game: everything just moves along quite nicely! We were playing a small game, of course – a small number of units per side, and only having three command points each to use meant we both pretty much re-rolled something, and interrupted each others’ combats once. But it didn’t feel as bogged-down as my previous games of 7th have felt, and while it took 3 hours, I think that was definitely more because we were both quite new (well, I was brand new!) to the rules. I’ve previously set aside entire days for one single game of 7th, so I definitely appreciated how quick you can move through a game.

I didn’t really have a plan for my battle. I started out wanting to get a sort of firing corridor for my Immortals, but the Orks’ charge just floored me and so I was put onto the back foot. While I could adapt a little and managed to charge my Lychguard into a couple of combats, I think overall I need to have a little more flexibility into the list to allow for shooting and melee, and a little bit of shenanigans as well. I think this is where Deathmarks could come in handy, as they can teleport onto the battlefield and snipe at characters etc. Synaptic disintegrators aren’t the greatest weapon in the arsenal, of course, but with My Will Be Done giving them +1 to hit if there’s a nearby Overlord, it could be decent enough!

Overall, I really enjoyed this game, and I’m looking forward to getting up to the store for more games soon! It took 3 hours to play, as I said, mainly because we were both quite new to the game (though also the fact that Necrons are very tough to get rid of, even when my reanimation protocols aren’t going too good – I was still getting at least a couple of models back each turn!)

Definitely excited to not only play more 8th with my Necrons, but also to get some experience with more armies!

One thought on “Getting into 8th”