Hey everybody!
It’s another game day here at spalanz.com, and this time around, it’s a small-scale game that is falling under the spotlight of awesome, the two-player Cold War: CIA vs KGB!

This is a game that I first came across five or six years ago now, when the revised edition came out from Fantasy Flight Games and I managed to pick it up for under a tenner. The Cold War isn’t an era that I’m super familiar with, though since I had been to Berlin in 2008, I’d grown a lot more interested generally in that whole era.

The game is basically a bluffing game, where the players take on the role of the CIA or the KGB and send a variety of operatives on missions to control global territory and win the ideological struggle of east vs west. Let’s take a look at some of the cards! 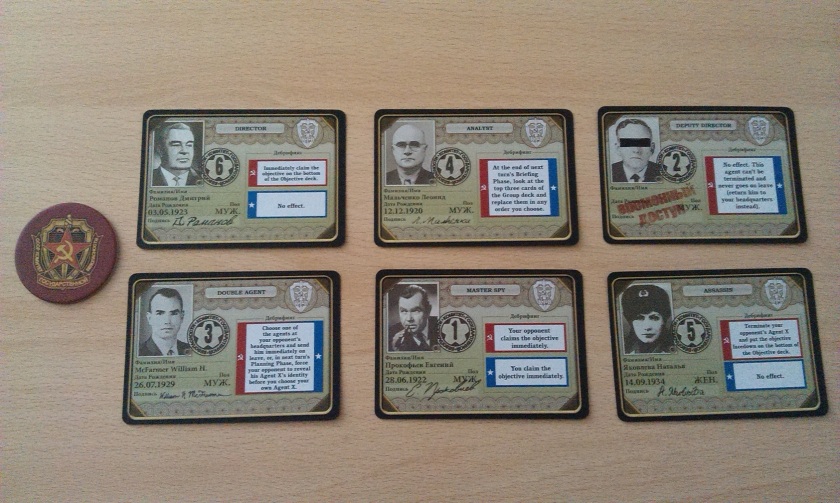 The CIA and the KGB each have the same resources to draw upon, from the deputy director the the master spy or the assassin. The cards all have the same abilities, they just have different artwork to indicate the faction they belong to. Each of these agents has an initiative (the number next to their photograph) and an agenda (the text boxes on the right). We’ll get back to these things in more detail in a moment.

The objective of each game round, representative of one year’s struggle in the Cold War, is to win influence over a country or event that is determined at the start of that round. Each of these Objectives is worth a victory point (the number in the bottom right corner), and is fought over by agents recruiting Groups of people to aid them in their attempt to exert influence there. This is shown by the Objective’s Stability, the large number in the centre of the card there. These Objectives also have a population ranking, and agents can never recruit more Groups than the number of population icons (on the bottom left of the card). Let’s take a look at some Groups:

These cards all belong to one of four factions – political (purple), media (blue), economic (gold) and military (green) – and have a power rating from 1 to 6, as well as an ability common to that faction. These Groups are used by players to attempt to gain influence over the objective, and a player can recruit enough Group power up to but not exceeding the Objective’s Stability.

For example, the Egypt Objective shown above has a population of four, and a Stability of eleven. A player may recruit the Police (4), Bankers (6) and Artists (1) Groups in order to attempt to gain control of the Objective and claim its 20 victory points. If both players have managed to accumulate 11 power-worth of Groups, then the Bias icons (in the top right of the Objective cards) are used to break ties – for Egypt, the player who has the most political (purple) power would win, but if no player has any political power or those numbers are tied, it then comes down to economic (gold) power, and so forth.

If a player has more power than the Objective’s Stability, he causes civil disorder and his agent is revealed, and removed from the game “as his superiors disavow all knowledge of the agent and his activities and abandon their agent to his doom”. Wonderful stuff!

Assuming civil disorder has been avoided, the player with the most power places his domination token on the Objective – but the struggle isn’t over yet! The two agents are then in for Debriefing, where they are revealed and their agendas are resolved in initiative order, lowest to highest. Three of the six agents have separate effects that happen, depending on whose domination token is on the Objective – for instance, if the Master Spy is resolved, and the KGB token is on the Objective, the CIA will actually get to claim that Objective for themselves.

So that’s the basic gameplay for Cold War: CIA vs KGB. There is so much to the actual game turns, of course, as you attempt to bluff your opponent and fight over the Objectives round after round. The individual effects of Groups can cause a lot of back and forth as the game goes on, and right up to the point where the agents are revealed, you never really know if you’ve won the Objective that turn. There is so much to immerse yourself in, as the stock 1960s-era photos help provide that definite feel for the world of the game.

Curiously, though, it’s the sort of game that generally flies under the radar, I feel. The box is tiny – I purposefully took that photo at the start from quite a way off to try to show you that it’s the sort of game you can very easily travel with (even more easily than Space Hulk Death Angel, whose entire contents will fit into a deck box). It’s not the usual sort of flashy thing that you see on the shelves of your LGS, like the fantasy and sci-fi things that more often than not take up room there. There are also no expansions, just a simple collection of 59 cards and a couple of cardboard tokens, yet the enjoyment you can get out of this is just great!

I just love it!