Hey everybody!
Continuing the theme from earlier this week and the classic Assault on Hoth, I thought I’d take some time to talk about the quick catch-up I had with the Star Wars ongoing series from Marvel. Despite collecting up issue after issue, I’d not actually read any of the new series for over a year, so it’s time I try and make the long slog to catch up with what’s going on… 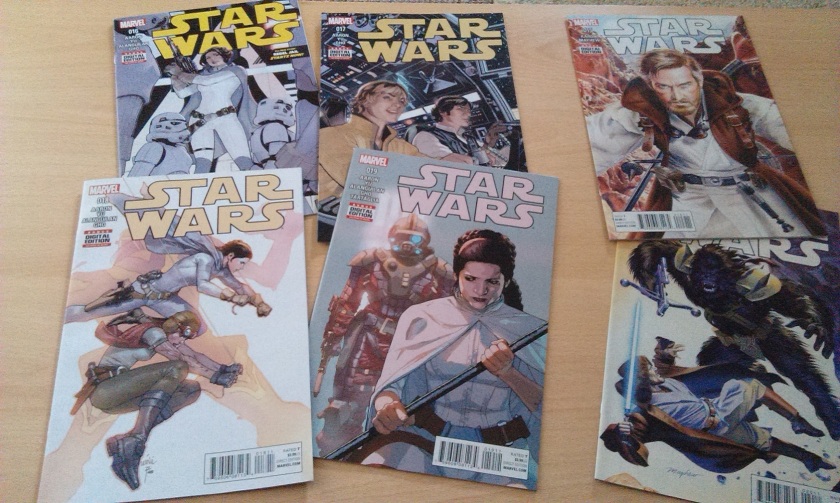 First up, then, we have Rebel Jail, which comprises issues 16-19 of the ongoing series, and is framed by two more stories “from the journal of Obi-Wan Kenobi”. Rebel Jail takes up where Vader Down left off, as Leia and Sana (yeah, Han Solo’s not-wife) deposit Doctor Aphra on a secure Alliance jail that is positioned ridiculously close to a sun for security. Only it’s not so secure, as the facility is infiltrated by a mysterious figure who turns out to be the guy sent to infiltrate Coruscant in the first Star Wars Annual, Eneb Ray. Turns out he was trying to make Leia into the leader he believed the Alliance needed, by forcing her to kill the Imperial prisoners held there.

The story was a bit of a let-down, particularly seeing as how it was drawn out over four parts. I did like how the Annual was brought into this universe, as I was beginning to wonder if these things would ever amount to anything, so that was good. (My only previous experience with such things has really been the DC annuals, which tend to be side stories at best). I’m disappointed that Sana Starros is still around, however. The character is constantly made out to be a mercenary and only hanging around because Leia is paying her for her services – but we already have that storyline in Han Solo at this point in the timeline. I would have preferred to see a few more real rebels fleshed out into the background, and maybe even get some folks like Toryn Farr in on the pre-Hoth action, you know? While they could be downright silly at times, Bantam often made an excellent effort to integrate these characters across all points in the timeline, building up a proper stable of characters that all felt part of the mythos. I get that Sana is a scoundrel, and we’re probably expected to respond better to her than a rebel operative, but it just feels a bit redundant somehow.

The two Obi-Wan stories, while nothing particularly special in and of themselves, are still notable for the really cool artwork that show an aging Obi-Wan that is part-way between Ewan MacGregor and Sir Alec Guinness. Issue #15 introduces the Wookiee Bounty Hunter, Black Krrsantan, who has already made an appearance in the Vader ongoing series that took place correspondingly later in the timeline. There was a reference to his being on Tatooine in that story arc that is now resolved here, anyway, and I really had a bit of a thrill from getting that connection! Something that Marvel can never be accused of is bad continuity in major series like these, and their multitude of crossover events show that they are dab hands at placing little tidbits like these across their products, which do help to make the whole thing feel like a cohesive universe. Issue #20 really pulls the two previous Journal entry stories together, as Black Krrsantan faces off against Obi-Wan in the Dune Sea. We also get a fairly surprising insight into the relationship between Obi-Wan and Owen Lars, which I kinda want to see more of. I mean, I get that Owen is hostile to Obi-Wan to protect Luke from him, but I’d like to see how their relationship managed to get to that point, you know? Presumably Owen didn’t go overnight from that final scene of Revenge of the Sith, where he takes delivery of the newborn Luke from Obi-Wan, straight to pounding his fists around and shouting til he’s purple for the crazy old wizard to stay away from his family, you know? Anyway! 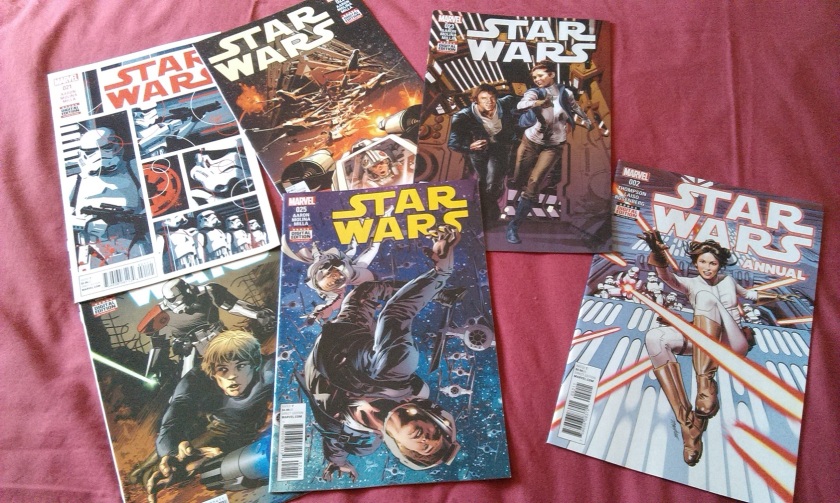 The Last Flight of the Harbinger is next on the list, starting with a bit of a prologue as we follow Sergeant Kreel (the Games Master from the Showdown on the Smugglers’ Moon arc) leading an elite group of stormtroopers against the rebels. I don’t actually know if this is meant to replace the notorious 501st regiment “Vader’s Fist”, but it’s certainly built up as an elite group of soldiers who are hard-as-nails, so who knows.

The rebels are attempting to break through the Imperial blockade of the planet Tureen VII, and the only thing big enough to break through with is an Imperial Star Destroyer. Leia, Luke and Han manage to steal the ISD Harbinger, forcing its crew to abandon ship, then pilot the war machine through space and straight at the cordon of the planet. When Imperial High Command hears of this, Vader sends Kreel and his men to recover the ship, which is inexplicably flying at sublight speed across the galaxy. The stormtroopers infiltrate the ship, but cannot re-take the Harbinger before the rebels fly it directly at the Imperial ships above Tureen VII.

While Rebel Jail was a bit drawn-out, this storyline was pretty much one of the worst kinds of goofy story I’ve yet encountered in the new canon. Allow me to ramble for a moment…

First of all, the entire five-issue arc seems to have hinged upon the idea of “Hey, you know what would be cool? If Luke and the gang hijack a Star Destroyer!” So we have a blockade of a planet that is apparently impregnable – the actual cordon, like so many comic-book planetary cordons, is in a ring around the equator, and does not exist in three-dimensional space. You know those blockade runners that are so prevalent in the universe? Why not just use one of them? They have “blockade runner” in their name, they might be built for this very task. Nope, we’ve got half a dozen people stealing a Star Destroyer, and also successfully managing to fly it with that many people, too…

Secondly, Han and Leia have a foot race around the ship to see who will be the captain. It actually features as the cover art for one of the issues, too. I can’t even begin to explain just how inane this event is, so I’ll just leave it there.

The story is also just another one of these throwaway things, which is beginning to irritate me about almost the entire new expanded universe so far. I won’t get into full-blown rant here, because this blog is running kinda long already, but suffice it to say, the only book that seems to be anything more than “just another adventure for Luke and the gang” is the excellent Bloodline. There are just so many books and comics coming out that really seem to have no impact on the greater Star Wars storyline, it’s honestly beginning to depress me as a Star Wars fan, and probably the single biggest reason why I’ve not picked up any of the new comics in over a year.

It’s a similar story with the Star Wars Annual #2, which sees Princess Leia injured during the line of duty on Skorii-Lei, and helped by a new character called Pash Devane. Pash is kinda interesting, as she’s not your usual female comic book character, but rather a heavily-muscled type who was forced out of her career as an engineer when the Empire came, and now survives by doing menial labouring. Pash at first expresses apathy towards the Rebellion as well as the Empire, but we get a typical Leia story that sees the Princess change someone’s mind. It’s the usual kind of throwaway story that I mentioned earlier about these Annuals, but worth mentioning just for the different depiction of females in the universe.

The next arc in the ongoing series is, I believe, a longer Obi-Wan Journal, so I’ll leave that for another time. I’ll be back soon with some more musings on Star Wars comics, catching up with the Vader storyline!