Hey everybody!
It’s been an exciting day for all of the news coming out of AdeptiCon regarding Warhammer 40k and Age of Sigmar! I wasn’t quite expecting so much so soon, but I suppose the times have been changing lately, and only for the better!

First of all, we’ve had a better look at the new Warhammer Shadespire, a miniature skirmish game set in the Age of Sigmar universe and apparently coming with tournament rules later this year. I’m all for skirmish games, as I think they allow for some wonderful customisable content. We’ve been talking about it at the local GW, and I think we’re all in agreement that, so long as they provide ongoing support, it could be something amazing. Hex-based movement is interesting, I suppose a bit like Gorechosen, but the fact you need cards to play the minis seems like it might have a bit of the Silver Tower thing going on at first. Hopefully they’ve learnt from that, and will provide enough content to support a wide variety of warbands right from the off. I’ve been drifting away from AoS for a while now, focusing my energies on 40k when I’ve been doing anything hobby-related, but I do think it looks like it could be great, so will be keeping an eye on this as things develop!

The Death Guard are getting the Thousand Sons treatment, with reports making it onto facebook that a new book and entire model range coming out soon – including the primarch, Mortarion. Is that supposed to be his scythe near the end? While I’m not planning to get myself any of these chaps, as I’m not a big Nurgle fan anyway, I think it’s fantastic that GW are moving in this way, supporting so many different factions in the game with distinctive models of their own. Sure, they do look a little too closely related to the Putrid Blightkings from the End Times of Fantasy, but I suppose it’s all thematically tied together in the end. Overall, I love seeing them support these factions in this way, and I’m looking forward to seeing what’s next on the list as the year moves on! 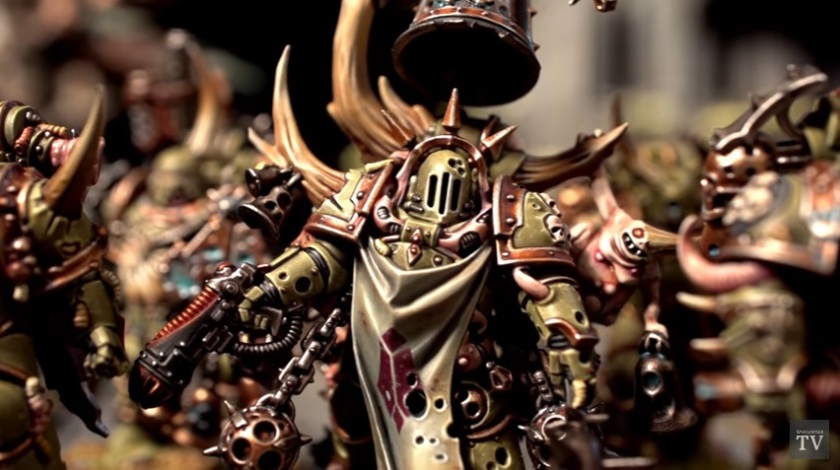 Finally, we’ve got the exciting news that everybody has been waiting for – what are they doing with 8th Edition 40k?

First of all, we’re getting a General’s Handbook-style 3 ways to play, which sounds really nice as I enjoy narrative style games. Narrative games in AoS tend to revolve around at least one side being pretty much prescribed, which hasn’t been as prevalent in 40k for me to see, so I’m not sure how well that will look, but I’m optimistic! Most excitingly, however, is the idea of army-specific rules for bringing thematic lists – unfortunately, I can see how this would be abused by power gamers and the like, but I still hope that it’ll be fun, and provide a more interesting game all round.

Changes to movement and shooting I can’t really speak about, as I’ve never actually known 40k outside of the current 7th edition, but it does sound good that each model will have its own individual movement characteristic – I’ve already had the rant about needing to consult three or four pages of rules to find out how my Triarch Praetorians work! It all seems to point to a warscroll-like one page rules sheet for each unit, and I’m very much in favour of this. However, I can’t say that I’m all for changing how charges work – I think the initiative-based system for close combat is great, and thematically I don’t think you should get to go first just because you charged; what if the guys you’re running into can see you coming, and formed-up ready to meet you? Maybe there will be certain units that have quick reflexes (Dark Eldar, maybe?!) who will have specific rules to interact in this manner. I guess we’ll see!

The fact that the article mentions that these are rules that people will perhaps be playing with at next year’s AdeptiCon makes me wonder, when will we be seeing 8th edition hit? Everyone has been assuming April-June time, but this new info sounds like it’s still under development, which would not give them enough time to get new rulebooks into print and distributed ready for a launch so soon…

At any rate, I’m all for more theme in my 40k, so I’m looking forward to seeing what they come up with when the new edition eventually hits!