Hey everybody,
It’s game day here at spalanz.com, and today marks something of a triumphant return for me to Magic the Gathering, having taken almost the whole winter off from the game. I’m always quite conscious of the fact that I seem to have some extremely expensive hobbies within the niche of hobby games, but I still enjoy the fact that they’re by far some of the most immersive. With all that said, let’s get started! 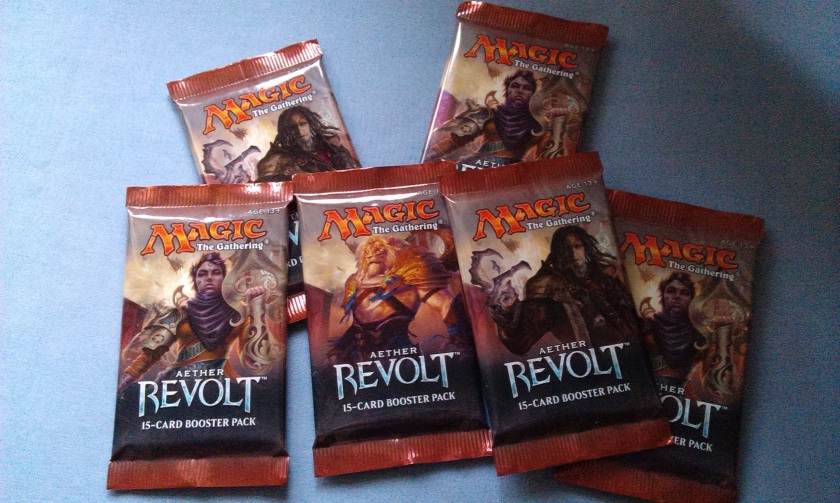 Aether Revolt is the second set in the Kaladesh block, and the 73rd expansion for the game in total. It came out in January but, unfortunately, I wasn’t paying attention until last week, when I thought I’d take a look and buy a couple of packs to see what I’ve missed.

Kaladesh has seen the Gatewatch confront Tezzeret for his corrupt dealings as head of the Consulate on that plane, as well as delving into the backstory of Chandra (being, as it is, her home plane and all). Whereas magic is fairly prevalent on other planes, here all of that is kinda replaced by the aether that is used to power all of the automata of Kaladesh. There are some corrupt goings-on between Tezzeret and the Gatewatch, and Ajani shows up to lend his aid, becoming yet another member of the team.

This whole Gatewatch thing is a bit… gimmicky, I feel. I want to like it, but it just feels like they’re trying to formalise things between the Planeswalkers in a not too subtle copy of something like the Avengers or Justice League. I get that, but I just think it could have been done better, if it had to be done at all. I mean, Planeswalkers have worked together before without needing to create some kind of grand alliance. But it does mean that we get new Oath cards for each Planeswalker that joins… Hm!

In terms of new rules, I’ve already discussed the Kaladesh stuff back in the day; Aether Revolt adds a couple of new mechanics, Improvise and Revolt. Improvise is basically the same as Convoke from back in the day, using Artifacts to tap for generic mana rather than Creatures. Revolt is an ability word that will have a specific effect if a permanent you control leaves the battlefield that turn. They’re interesting enough, without shaking things up too much – precisely the sort of mechanics we’re now used to seeing from smaller sets in a block.

Anyhow. Kaladesh looks like a very pretty plane, with a lot of filigree on the automata that grace the plane, and I remember seeing some of the promotional stuff going on back in September that really went to town with this, and it looked awesome. However, it does all feel a bit overwhelming, and I’ve not really delved too far into any of that stuff. What has been interesting to me, however, is the new Aetherborn tribal stuff from the block, and partly why I’ve chosen to write this blog today! 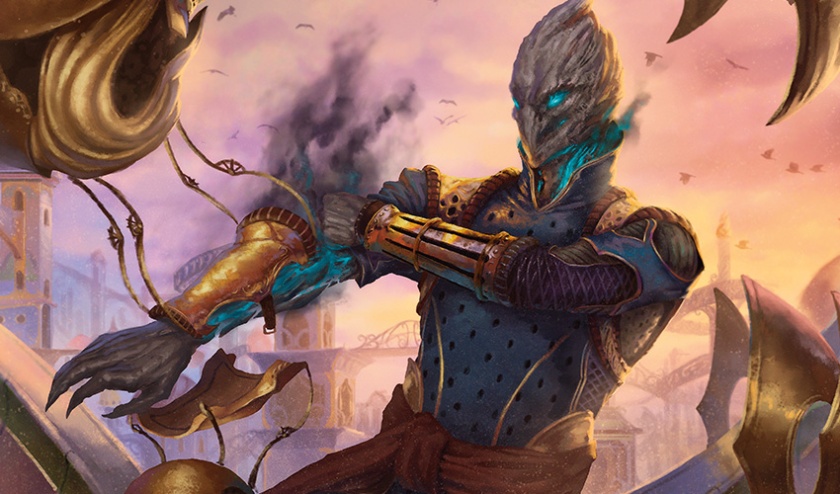 Aetherborn are a by-product of the aether refinement process, apparently, and only have a short lifespan as their bodies dissolve into the aethersphere. However, they can sustain themselves by leeching off of others, and thus naturally fit into Black. Indeed, some of them have the subtype of Vampire, which somehow has become my favourite kind of tribal deck to play in Magic! So I’ve naturally found myself drawn to these guys.

I’ve been half-fiddling around with a black-white Aetherborn deck, though it’s not quite there yet. I’ve since seen The Mana Source’s mono-black Aetherborn deck, which looks like it might be a lot better than mine, and I do have all of the pieces, so I might go down that route before long. There are some other things that I’ve been tinkering with, but I’ve not really looked into anything beyond this with any kind of seriousness right now. Bearing in mind that this is very much a first-attempt and hasn’t been played, this is the deck I’ve come up with for Standard right now:

It’s more black than black-white, which may make you wonder why I’ve got so many plains and dual-lands in there. Well, insurance. I’ve played far too many games of Magic with two-colour decks, and have been completely screwed on the right colour despite having what the internet has told me is “the right number” of the secondary colour. So I’m going more even than necessary, just to be on the safe side!

There’s a bit of a +1/+1 strategy going on with the Aetherborn here, as well as some classic black-white drain and gain style stuff. Deathtouch is a wonderful mechanic and I like to include it wherever I can, and so many people seem to dislike lifegain that I can’t help but include it whenever possible! This is by no means going to be winning me any notoriety, but I think it’s a decent enough starting point for getting back into the game after a couple of months off! 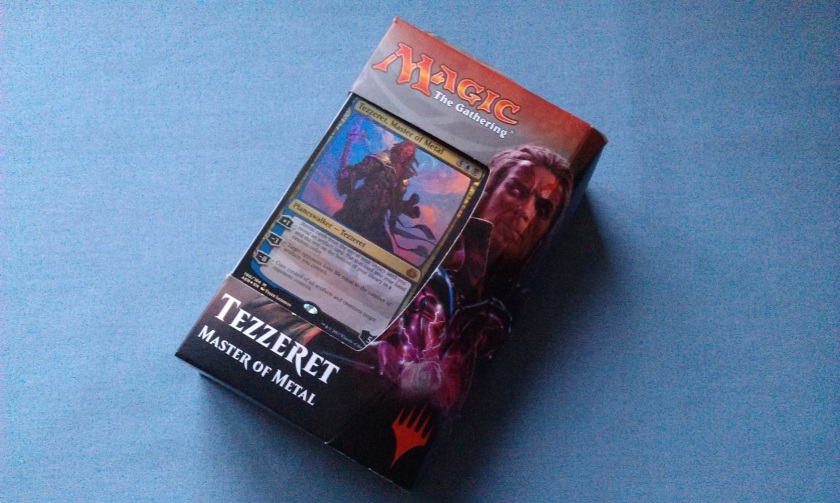 In addition to getting some packs of Aether Revolt, I’ve also bought one of these Planeswalker Decks, or whatever they’re called – the things that replaced Intro Packs back when Kaladesh launched in September. Back when these things were first announced, I was a bit optimistic, but I’m not so sure these days. Having bought the pack, it’s a nice way to get some interesting new cards, and I think the Tezzeret Planeswalker card in this pack is perhaps a little more useful than the two from Kaladesh, but even so, I don’t think I’m going to rush to try and build a deck around him.

While many people don’t seem to rate the Planeswalker decks, such as The Professor’s pretty damning review here, I liked Intro Decks, and I think I still like Planeswalker Decks, as you can pick up a bunch of cards for fairly cheap. One of my favourite things to do with Magic is build weird decks with lots of commons and uncommons, and I never really go too much for the splashy things that require me to spend a lot of money. Sure, you probably won’t have much fun if you buy these things and attempt to play them against other folks, though I always had a lot of fun playing Intro Decks against each other, and I imagine that these new iterations will have a similar experience. You can then use them as a base to trade up throughout the block, swapping out the “splashy” Planeswalker for the version that is part of the block and still benefiting from the uncommon card in the deck – for example, I can swap out Tezzeret, Master of Metal for Tezzeret the Schemer, and still benefit from the lifedrain of Tezzeret’s Simulacrum. (Tezzeret’s Betrayal would have to go, though). In fact, I think I might try and see how far I could take this Tezzeret deck!