Hey everybody!
It’s the first game day of 2017! I’m hoping to have lots of awesome games on the blog over the next 52 weeks, and I think I’m starting with an absolute cracker! As per my Christmastime tradition now, I’ve been playing Eldritch Horror with the new expansion, though in this case, “new” is kinda pushing it a little. With no new big box expansion for the game until later this month, I’d been saving the smaller box, Signs of Carcosa, until the festive period – no mean feat, considering the game was released in June!

So, Signs of Carcosa is a small-box expansion that follows in the manner of Strange Remnants in that it includes new investigators as well as a new Ancient One, and a glut of new cards to support that ancient enemy. Signs of Carcosa is particularly exciting for me, because we have four investigators from the Arkham Horror base game, which is always something of an event in these circumstances – they’re investigators who have been a part of this mythos for so long now, after all!

Hastur is the big bad guy from this expansion, and while his subtitle there might be “the unspeakable one”, this is very much a King In Yellow-themed expansion, similar to The Yellow Sign expansion for Arkham Horror. Naturally, there isn’t a lot of focus thrown specifically on the play from RW Chambers’ short story collection, but its presence does loom large in many of the game pieces. Encounters in the various board locations focus on artists and seeing the Yellow Sign, etc, while all of the Other World encounters are focused on Lost Carcosa.

Much like Strange Remnants brought back the focus mechanic from Mountains of Madness, Signs of Carcosa brings back the impairments mechanic from Under the Pyramids, which has a lot of focus placed on it through Hastur’s ability, along with a lot of the fail conditions on the encounter cards.

Hastur is one of the more difficult of the ancient ones to defeat in other games such as Arkham Horror and Elder Sign, but his incarnation here seems at first glance to be much more simple – you only need to solve two mysteries to win! However, these mysteries have a reliance on spending clues, and there are a lot of Mythos cards that will force you to discard your clues, which makes solving even two of Hastur’s mysteries a lot more difficult than it perhaps might seem! I actually managed to win the match against him, but it was a close-run thing, and the eventual win was actually highly luck-dependent, as I’d had an Other World encounter that gave me the clues I needed to go on to solve the mystery. One of my investigators had already gone insane, and I was keeping another pretty much permanently in London in an effort to spawn more clues before they kept getting discarded! 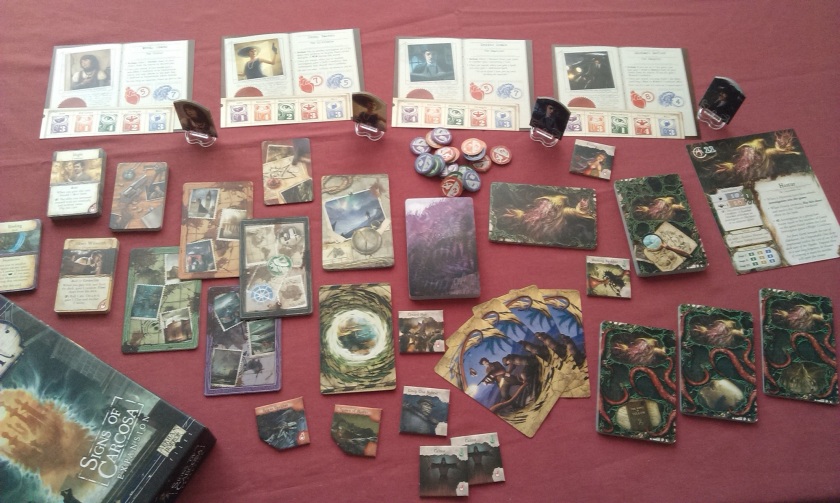 We also get the now-usual batch of new assets and artifacts (mostly King in Yellow-themed, of course!), new spells and unique assets, and Hastur gets three sets of special encounters. Considering you only need to solve two mysteries to win, he comes with a total of eight – a nice touch for replayability! The new Prelude cards offer some interesting set-up options, including doling out copies of the new Promise of Power condition card, one that allows the influence of The King in Yellow to be felt even if Hastur isn’t the ancient one, and another that brings the Order of the Silver Twilight to the game through a fifth reserve slot. I really like the Order, and for years had tried to make a Silver Twilight deck work in Call of Cthulhu, so it’s always fun when they show up. Part of me hopes we’ll get something of a full-on expansion with them in or something, but I also like the way they insinuate themselves into other expansions.

All in all, this was a fun box. Didn’t feel quite as exciting as Strange Remnants, which has a lot of stuff going on of course, but anything that adds so integral an ancient one as Hastur to the game has got to be close to the top of anybody’s wish list!