Hey everybody!
It’s another game day here at spalanz.com, and it’s time to return to one of my absolute favourite games in the history of the world: Lord of the Rings LCG! It’s been more than a year since I took a look at the deluxe expansion, Heirs of Númenor, so it’s time to look at the subsequent cycle!

Against the Shadow was released throughout 2013, and subject to some hefty delays here in the UK. The first pack in the cycle, The Steward’s Fear, was actually the first game I had delivered after I moved into my new flat! As I said in the last blog, the narrative possibilities of the game were really embraced in Against the Shadow, with the designers – including company CEO, Christian Petersen – developing a story that involved us solving mysteries on the streets of Minas Tirith, defending the outpost of Osgiliath, and ultimately, into the shadow of the Black Gate itself!

The player cards in this cycle were fairly decent, mainly involving an effort to support mono-sphere decks and pushing both the Gondor and new Outlands traits. This latter deck type became extremely powerful quite early on, with a series of allies who were buffed by having other Outlands cards in play. The heroes were a bit of a mixed bag, and includes the first original hero for the game since the core set, Mirlonde. As usual, however, I’m more interested in the scenarios than the player cards!

This scenario remains, for me, one of the most narrative games in the entire Lord of the Rings product line to date.  There are three modular elements to the game: a plot, an archenemy, and a series of clues. The idea is that you are travelling around various locations throughout Minas Tirith, trying to discover a sleeper agent from Mordor. Most locations are “underworld” locations, which are placed in the staging area with a number of cards face-down beneath them. As you explore these locations, the cards are turned face up, and can either be enemies, or clues. As you progress through the game, you will first uncover the plot that has been put into effect, before finally uncovering the villain himself!

This is a really prescribed scenario, with an especially detailed set-up. As such, it can be a really great, thematic experience, but also sometimes you just want to explore somewhat at your own pace, which is why I always find myself returning to the Mirkwood scenarios… It’s a really good expansion, however, and well worth taking the time to explore!

This cycle was the first to employ a narrative focus at the forefront of the game. Rather than having an overarching plot that didn’t really have much of an impact, the adventure packs each having a story that you get to read when you finish the adventure that describes what happens next.

The Drúadan Forest takes place as part of the heroes’ chasing the villain out of Minas Tirith before his true identity was revealed. The scenario sees us going through the forest, much like Into Ithilien from the deluxe box, but this time we’re set upon by the Woses rather than the Haradrim! Again, there is a prescribed feel to the game as we have the big enemy kept aside until later in the scenario, but overall it’s a fairly standard game. 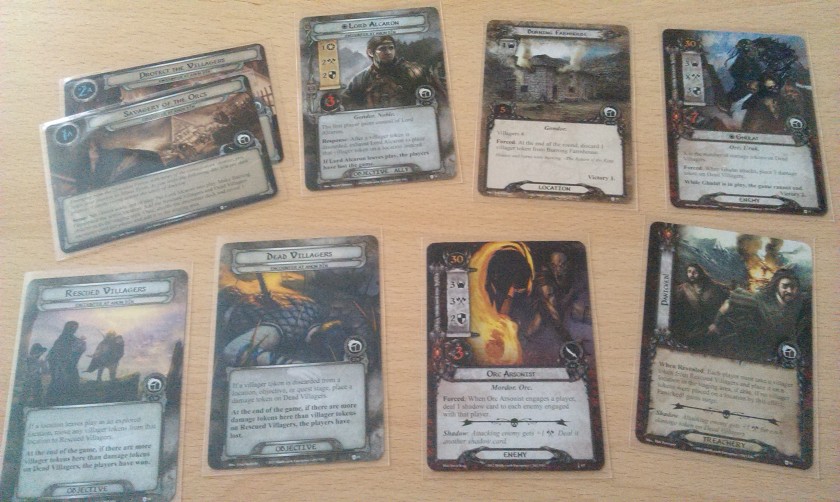 Every cycle seems to have one of these sorts of quests, which feels super-thematic but is almost entirely written off by the majority of gamers as “too easy” or whatever. True to form, this scenario is one of my favourites from Against the Shadow, as well! Returning from the forest having seemingly shot all of the conspirators full of arrows, the heroes come across the village of Amon Dîn being attacked by Orcs!

This scenario features the really great Villagers mechanic, where locations come into play with resource tokens on them to represent a number of villagers: when the location is explored, the villagers are rescued and placed on the appropriate objective card. There are a number of cards that will remove villager tokens from cards, and deal damage to the “dead villagers” objective card. The object of the game is to rescue more villagers than see villagers die. I really like this, as I said, and it feels really thematic when an Orc enemy shows up and starts dealing damage to the villagers before you can slay him!

The scenario is also the first in the cycle that gives us the objective-ally card of Lord Alcaron, whose scroll was so important in Peril at Pelargir! Lord Alcaron is a character invented for the game, and functions similarly to Arwen in the previous Dwarrowdelf cycle, where if he is leaves play, we lose the game. Alcaron can be exhausted to rescue a discarded villager token, which is really useful in this scenario, but his effects will change as we meet him in subsequent scenarios!

I said that Encounter at Amon Dîn was my favourite scenario from this cycle, but Assault on Osgiliath runs it a very close second. This scenario is also one of the strangest put out in the entire history of the game, if I’m honest. In the narrative, we’ve saved the villagers and have now hooked up with Lord Alcaron, and we go off to Osgiliath to help Boromir re-take the beleaguered city from the Orcs. This is represented by the heroes literally taking control of explored Osgiliath locations as the game progresses.

When an explored location leaves play, it goes into the victory area, but there are numerous effects that depend on how many locations we control, such as enemies having +1 attack or whatever. However, in order to win the game, we just need to control all of the Osgiliath locations in play: set-up requires us to place one such location in the staging area at the beginning but, feasibly, that may be the only such location we turn up, so the game can be over really, really quickly!

Even so, I love the thematic tug-of-war we have with locations coming under our control or then leaving again. It’s a really great scenario, and possibly the one I’ve returned to most often since its initial release.

The Blood of Gondor

This scenario sees us pursue the Orcs after successfully purging them from the city of Osgiliath, running back into Ithilien and right into an ambush! Lord Alcaron is back, this time he can exhaust to return enemies to the staging area, which can be a useful thing. We also get an objective-ally Faramir, which had fans up in arms at the time because the hero Faramir came out in the previous scenario!

This scenario involves the Hidden Cards mechanic, where the players take one card from the encounter deck and place it face down in the play area. This represents the forces of the enemy lying in wait. We also have the iconic Black Númenorean enemy in this pack, which initially excited me as I thought we were getting the Mouth of Sauron himself! But alas, this is just one of the many sorcerous men from the north. Anyway, there are a lot of cards, such as the Black Númenorean, that have a greater impact depending on how many hidden cards are in play. Objective-ally Faramir is another such card, who can deal 3 damage to an enemy card if one is turned up from a hidden cards pile.

From the second stage of the quest, Alcaron and Faramir are both captured, and all hidden cards are turned face up. The players then need to quest using their attack value, something from Heirs of Númenor that has featured somewhat sporadically throughout the cycle, in order to win.

This is another super thematic scenario in an already super-thematic cycle, but always seems to be overlooked – probably because you can’t use any other version of Faramir in your decks to play it, and he can be a fairly useful card…

The final scenario takes us to the Black Gate of Mordor itself, as the storyline of the cycle plays itself out. Another prescribed scenario that throws increasingly difficult ‘captain’ enemies at the heroes in order to prevent their recovery of Faramir, it reveals that Lord Alcaron is a traitor to the free peoples of Middle Earth!

Each of the captain enemies needs to be destroyed in order to make it past each stage, with the demise of the final, Nazgul enemy winning us the game. The Nazgul has the usual effect of reducing all damage dealt to him to 1, which is wonderfully in-keeping with other iterations of these enemies in the game, but horrible when you’re trying to win! There is also a timer element in To the Tower, which will lose us the game if it has 10 or more progress tokens on it. There are all manner of cards that are trying to place progress on this thing, and I think it’s actually an incredible implementation of this war on two fronts thing: we’re trying to rescue Faramir, but we’re having to fight our way through the Orcs to get to him.

The scenario is difficult, I have to say, and once again can’t have Faramir in play, but it’s a really incredible way to finish what has been a really immersive cycle.

The nightmare packs for this cycle are, as can be expected, truly nightmarish, with all manner of unnecessary horrors added to each scenario! There are new Plots and new ways of interacting with the Villain in The Steward’s Fear, while the Drúadan Forest gives each hero five resources at the start of the game, and you can’t collect any more! Something that I really like about the Assault on Osgiliath nightmare deck is the additional Osgiliath location card, Palace Remains, which prevents you from claiming it until you have at least five other Osgiliath locations. This can drag the scenario out enough that the true tug-of-war feel comes to the fore.

While I still love the Mirkwood cycle dearly, and I don’t think anything can truly knock that cycle off its lofty perch, Against the Shadow is an incredible cycle, with some wonderfully thematic storytelling – which is precisely what this game is all about, for me.

2 thoughts on “Against the Shadow!”