Hey everybody!
This year of hobby progress blogs is drawing to a close, and I have to say once again, just how amazed I am to have been motivated enough to do this series of blogs! Writing up a progress report, even when there’s no progress to report, has really helped me to keep focused on doing things with this massive mountain of plastic and, while I’ve of course been adding to said mountain of plastic over the weeks and months, I’ve also been doing things with it, including playing games of course, so overall I think it’s been quite the success! By my calculations, week 52’s blog will be out on New Year’s Day, and will contain a fairly lengthy retrospective so, for now let’s take a look at the most recent week’s work!

I think I’ll start with my Alpha Legion. I mentioned last week that my local GW store is doing a painting campaign challenge thing, where you paint up a specified unit in a month and get points, and if you fully build, paint and base the miniature you get to roll off for additional challenges. Well, I’m somehow in the lead for last month having built and painted and based the entire tactical squad, as well as a rhino! So this month it’s time for an HQ choice, and I’m keeping it simple by doing a Legion Centurion, on the right there. He’s accompanied by a tactical support squad, all kitted-out with flamers as per the base stats. I’d been thinking about the flamer guys for a while now, as I love the idea of throwing them down in a drop pod, and they just torch up the battlefield to cover a retreat or something! Fabulous!

My additional challenge this month, unfortunately, is to “attempt OSL” on a miniature. Why didn’t I leave the rhino for this month?! I did that with the headlamps! So I’ve built another five-man tactical support squad, this time all wielding plasma guns, and I’m going to attempt some of that… You may be wondering, “why have they all got beaky/Corvus/MkVI armour on?” Well, this is because the Alpha Legion stole the blueprints or something during the Heresy, so have a stock of “Corvus-Alpha” armour they used at this time! I’m not actually a fan of the beaky helmet, and have been giving them away whenever I buy marine kits, but managed to get five of them for this project. I have to say, they look kinda good when they’re painted like this, especially given that they’re in full Corvus armour rather than the usual hodge-podge of pieces. So I’m pleased with that, at least!

Work will continue with these guys slowly, no doubt, but I’ll certainly get them done by the end of the month! 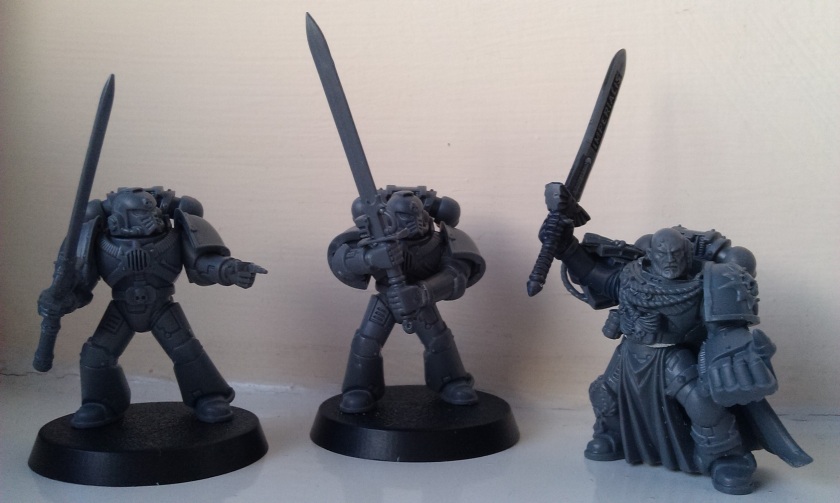 I’ve also been building, of course! Again, the local store challenge has included an additional thing this month – because of the HQ thing, there are additional points on offer for painting up a Command Squad, so I’ve pounced on this as reason to build up more converted marines! I’ve so far only done the two Chosen on the left, and am a bit concerned about the Standard Bearer, mainly because it doesn’t feel right for a legion like the Alpha Legion to be announcing their presence in that way, but what the hell, I’ll give it a go somehow! Might be one of these things I never really use, but I would like to have the options, I suppose!

Also, on the right you can see another of my conversions! As you know, I’ve started to build a Novamarines army, and while I’ve been faffing around with the assault squad (more shortly), I’d drawn up a list of what I wanted to have as my first phase, and the Chapter Master was head of that list. So, after doing some pondering, and looking through some of the boxes I have, I built up Gaius Hadraicus, using parts mainly from the Sternguard kit, with the torso from the Commander, and the sword from the Vanguard Veterans. I think he looks awesome, anyway, and can’t wait to start painting him up! However, first of all, I want to get these other chaps done:

I’ve saved the best (I think!) til last! My five-man assault squad is almost finished, and the tactical veteran sergeant on the right is also tantalizingly nearly done. After having used the wrong blue on the four assault marines, I’ve re-done them with Alaitoc Blue, and shaded the recesses with Drakenhof Nightshade. This doesn’t seem to have had much of an effect in the photo there, so I think I might go in again with Nuln Oil in some parts, to really get some contrast going. The aquilas have been done with Abaddon Black and shaded with Nuln Oil, then lightly brushed over with Eshin Grey. I still want them to be dark, but I’m a bit concerned they might be too black at the moment, so might go back with Administratum Grey or something. The purity seals have been done with Zandri Dust for the parchment and Screamer Pink for the wax, then shaded with Agrax Earthshade. The metal is the usual Leadbelcher and Nuln Oil, then I’ve done the gun and chainsaw casings with Incubi Darkness, also shaded with Nuln Oil. There are some gold details on the models that have been done with Balthasar Gold and shaded with Agrax Earthshade, as well.

The dreadnought has been resurrected from the last time I attempted Novamarines, and has had the armour panels done in exactly the same manner as the marines. The metal parts have been done with Leadbelcher and Nuln Oil, and the odd gold bits have also had the Balthasar Gold/Agrax Earthshade treatment and, while there’s probably still a long way yet to go with this gentleman, I do think he looks pretty good! The reference I’ve been using is this image, in case any of you are wondering why he hasn’t been properly quartered like the marines themselves:

So there we go! Some pretty decent progress has been made this week, I feel, and with a week off work coming up, I’m hopeful that I can get a lot more done before we turn into week 50…