It’s time for a new army!

Or, more accurately, to revive the idea for a new army!

I first started to collect Space Marines around Easter of 2015, and while I’d decided on Ultramarines as my chapter of choice, I didn’t really get very far with them at all. I’ve currently only managed to complete one ten-man tactical squad, but have a lot more partially-painted blue models! While casting about for inspiration, I painted up a five-man terminator squad in Genesis Chapter colours, one of the many successor chapters of the Ultramarines, and that planted the seed in my mind. Rather than worrying about the potential boredom of a sea of blue soldiers, I could include detachments of successor chapters for a bit of variety! 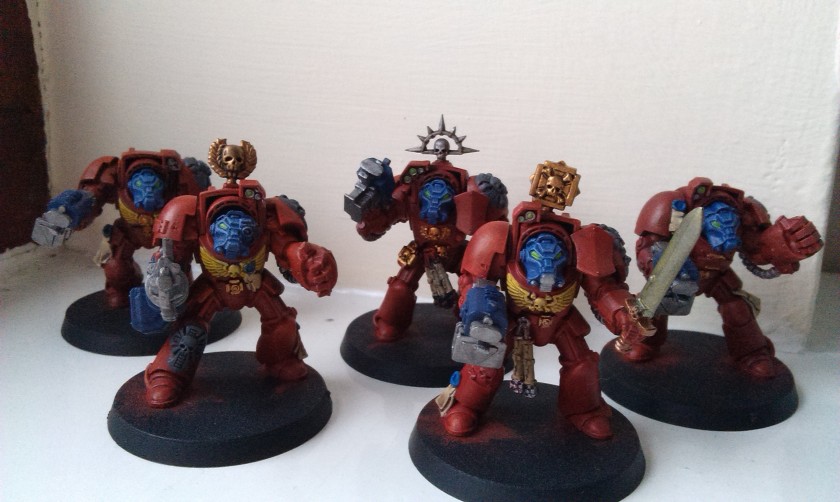 That idea waxed and waned for a couple of months, but almost independently of this I hit upon the idea of doing a small, five-man tactical squad of Novamarines back in April of 2016. I didn’t get far, only managing to paint three in the quartered blue and white livery, but I also got myself a dreadnought in an attempt to liven up the project. 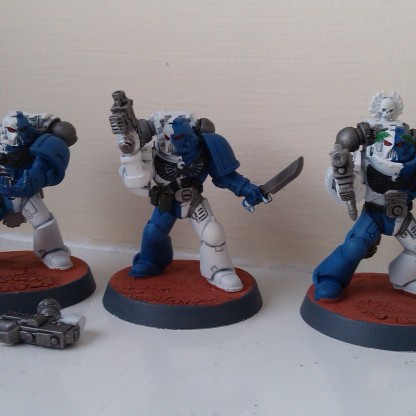 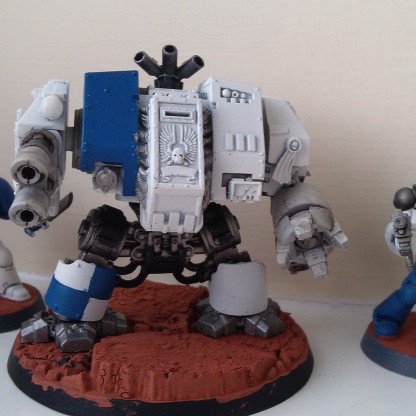 I actually really enjoyed how these guys turned out! Sprayed white, I was using the undercoat for the white quarters, and painted the blue inspired by this scheme, starting with Kantor Blue and moving up to Aldorf Guard Blue. It always seemed a bit too dark, however, and the contrast between the blue and the white was always too much for me, really. However, the project died a death, given up because I lacked the patience to really make it happen.

With the advent of the Deathwatch Veterans kit over the summer, and the inclusion of a moulded shoulder pad for the chapter, I decided I might give this chapter another try, but kept putting it off. Kill team arrived around the same time, and over the next few months, these two strands coalesced into the idea of seriously building a Novamarines army, but in true slow-grow fashion!

So now that the introduction is out of the way, let’s get to it!

It's my 800th post on this here instagram, and hopefully the start of something wonderful! Over the past couple of days, I've been building up two five-man squads of #SpaceMarines to use as a #killteam, but I want to actually make a more focused effort to build an actual Space Marines army now. Which should be a lot of fun – so what made me go for the #Novamarines?! I must be mad… Stay tuned for exciting updates, as these guys get painted up, and I start adding in stuff like dreadnoughts and terminators! #Warhammer40k

I’ve decided to build my army following a bit of a plan, rather than merely going through all of the kits that I like the look of and finding myself with a whole bunch of models, but no legal army! The first step has been to get a 200 point kill team built. 100 points of tactical squad, and 100 points of assault squad. Things have been progressing quite well with this so far – despite a bit of a hiccup with getting the wrong shade of blue on some of them! But I’m still really pleased with the progress made to date, anyway! 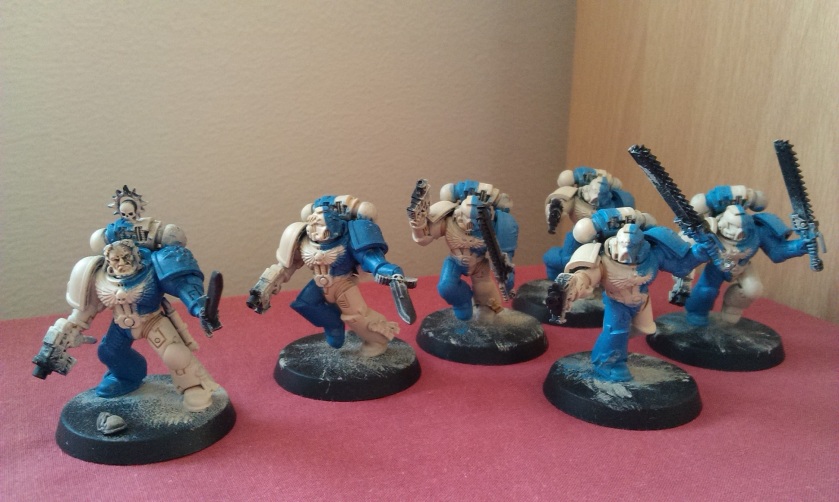 So let’s talk about my colour scheme.

I’ve been undercoating these guys with Chaos Black spray, which might seem a bit counter-intuitive given the pale scheme, but I just have better luck with the black. I’ve then base coated them all with Rakarth Flesh, and layered Flayed One Flesh over the top. It’s a really pale bone colour, without the yellow tinges that things like Ushabti Bone have, so looks great for that off-white look. I’ve lined the armour with Seraphim Sepia, and where necessary gone back over it with Flayed One Flesh. It’s taken about three coats of each to get the strong finish over the black, but overall I like the look of it!

The blue has so far only been a series of thin coats of Alaitoc Blue. The Novamarines colours are described as cobalt blue, and I think Alaitoc Blue has the right sort of look to it. It’s brighter than Altdorf Guard Blue, at any rate!

Behold, the totality of my #Novamarines project to date! The five tactical marines and dreadnought from earlier in the year are getting recycled into the mix! #Warhammer40k #SpaceMarines

I’ve now started to go back to those models from earlier in the year to improve them. The dreadnought hadn’t had much paint put on it, so I’ve gone ahead and put the Rakarth Flesh/Flayed One Flesh on there (as well as the four marines from my kill team) I need to strip the three marines that I first attempted to paint, but I think I’m going to wait for the time being. I don’t want to get too overwhelmed with these guys, anyway! 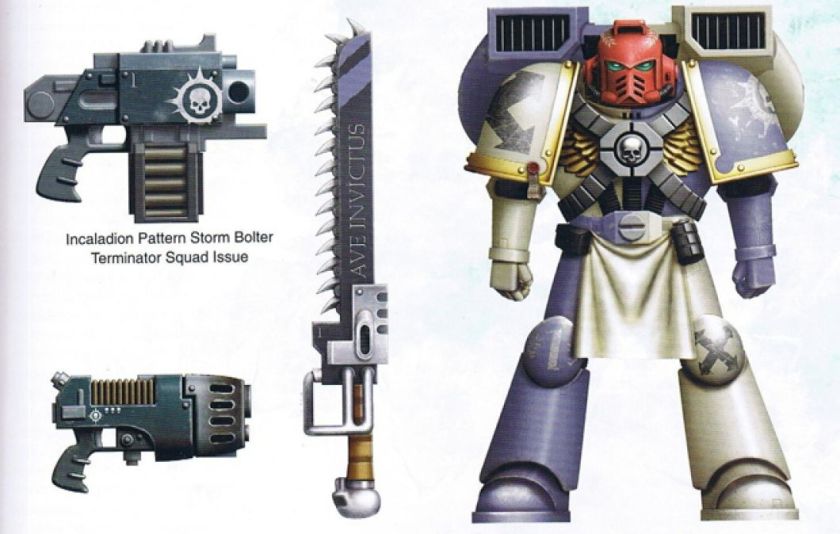 Between the 200-point kill team models, the other five marines I have on the go in need of stripping, and the dreadnought I think I have enough to be getting on with, but I’m still feeling in more of a building mood, so I’m planning to get five more tactical marines built up, and an HQ choice. So I’m going to end up with two troops choices (one five-man and one ten-man tactical squad), an elite (the dreadnought) and a fast attack (the assault squad). The HQ though… I want to build a Chapter Master!

Gaius Hadraichus is the current Chapter Master of the Novamarines, but I can’t find any lore on him online. I’ve therefore decided to just build something that looks really cool: power fists and relic blades for the win! I’ve got a few ideas for bits, mainly pulling from the Sternguard Veterans kit, which is a real treasure-trove of bits for this kind of thing…

All of this will total 690 points, so it’s still a fairly small army after all. Looking further ahead, there are more tactical marines on the horizon of course, as well as the fancy marines of the Command Squad! But I want to keep things manageable, as I’m concerned about getting swamped in miniatures again!

So stay tuned as I get these guys built up and ready for the tabletop! There’s a guy doing Howling Griffons at my local GW as well, so we’re talking about getting some games in when our quartered marines are up to fighting force, so there are exciting times to come, I’m sure!

5 thoughts on “Novamarines! part one”