Hey everybody!
For today’s game day blog, I wanted to take a look at the upcoming collectible dice game from FFG, Star Wars: Destiny. I got my Rogue One ticket booked yesterday, so it seemed appropriate! FFG have now put out a full tutorial for Destiny, and I’ve been getting pretty excited while watching it, so thought I’d share some of that here!

This game looks like it should be a lot of fun. When it was originally announced, I wasn’t quite convinced, but was going to pick up a starter or two and see what it’s all about. Having seen the official gameplay video, however, I’m feeling much better predisposed towards it. Sure, I’m still a bit sceptical due to the collectible nature of the game, but it seems like a really fun game, with just enough going on to make it interesting while remaining fairly straightforward. It looks like it should be possible to play a couple of games in a fairly short period of time, anyway!

The mechanics of building your deck, which in turn determine your dice pool, look pretty good as well. Looks like the different colours of characters available – blue, red and yellow – offer very distinct types of gameplay, which lead to some very interesting deck-building choices. I really like the fact you have your hero team, which determines your starting dice pool, but the cards you play can upgrade those heroes to add more dice to the mix, but also you can bring additional characters to have more of an army feel going on there!

Oh, and I really like the feel of mashing up the Star Wars eras! 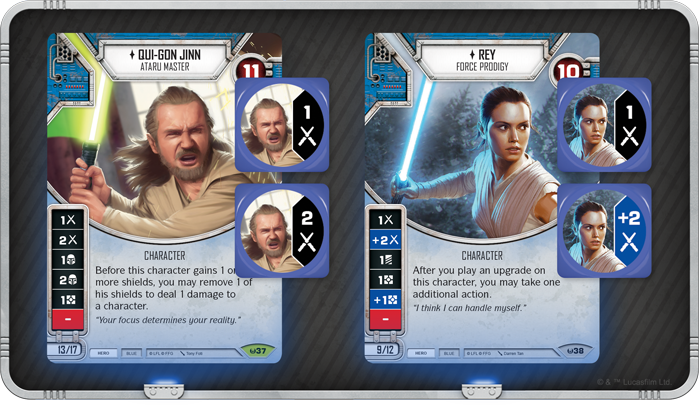 Being usually a very thematic gamer, there is nevertheless something really fun about doing this with Star Wars – it reminds me very strongly of the old Star Wars Miniatures game from Wizards of the Coast. Sure, there’s a way you can play with characters all from Phantom Menace, or Return of the Jedi, but you can also do stuff like Qui-Gon and Rey, or whatever the hell you like! Awesome fun!

I said that it looks fairly straightforward, but with enough interesting stuff going on to keep a level of depth to the game, and this seems especially true because of the interaction of your deck on the game. You’re not just rolling dice to whittle your opponent down, but in addition to the aforementioned additional people and upgrades, you’ve got the events to buff your folks and interrupt your enemies. There’s a level of card game mechanics here that is really drawing me – I like the odd dice game, don’t get me wrong, but I definitely prefer card games, so the fact this level exists in Star Wars: Destiny is really helping to pull me in!

There are some interesting mechanics going on, as well. As I said, there are interesting interactions with the cards and the dice, and it looks like there is a lot you can do to alter the flow of the game from just throwing dice around. I like the idea of the stronger damage results on dice being conditional on things like paying a resource, or having another result of the same damage type. Seems like there’s a lot going on, and it should be grand!

I already know my first line-up: Count Dooku (15) and Captain Phasma (15) – it should be hilarious!

One thought on “Fulfil your Destiny”