Hey everybody!
Week 45 has seen some more productive efforts with my hobbying, some more projects finished and some others in the planning stages. Let’s start with the finished stuff:

My ten-man tactical squad for my Horus Heresy Alpha Legion is now complete! I have to be honest, I’ve really given these a bit of a rush job – which isn’t all that bad, as the scheme isn’t exactly complicated. But I could probably have taken some more time on these things than I ended up doing. That said, there are also some elements where I’ve taken the time for some details, such as the plasma pistol, adding a hint of the pale blue in the muzzle as well as on the coils. Overall, they’re a serviceable tactical squad, and I’m glad to have them done. Especially as I’ve met the pledge of getting them finished in two weeks!

One squad down, one to go. I think my second mandatory troops choice is going to be Assault Marines, which means FW resin, but I’ll cross that bridge when I come to it. 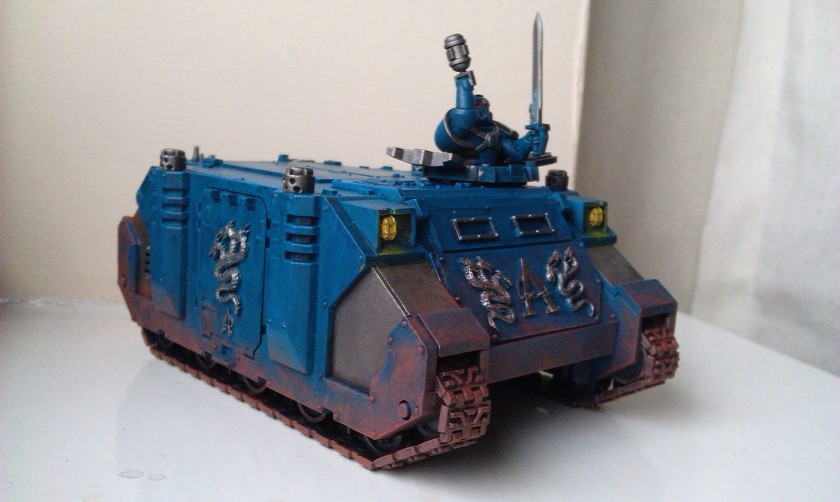 The rhino is the second project I’ve been working on this week, and I have to say, I’m not really that sure about a lot of it. First of all, I mentioned last week how the chassis has turned streaky in parts because of the Drakenhof Nightshade – I’ve tried to do some kind of overbrushing with, alternately, Teclis Blue and Sotek Green again, and while it has helped with some of this streakiness on the top, it is still an issue. However, it’s gotten to the point where I’m thinking I’m fine with the overall look – it’s kinda blotchy, but more importantly, it’s pretty much the same as every marine in the army, so I can live with it.

For the headlamps, I’ve painted the bulb with White Scar, then gone over it with Cassandora Yellow to add some depth of shape. I then lightly brushed on some Yriel Yellow, not just on the bulb but also on the surrounding hood and in a cone shape out from the base of the lamp, and finally added some Flash Gitz Yellow as a highlight here. The photo above doesn’t really show it, but I think on the tabletop, the effect is actually pretty cool – even if I do say so myself!

Of course, this is my first ever attempt with weathering a miniature, and I wanted to tie it to the rest of the army by adding some rust-coloured mess to suggest the tank is moving through the same battlefield as the troops. So I’ve stippled on Tuskgor Fur after speaking to the manager of my local GW, and I think, for a first attempt, it is actually pretty decent! I still want to do something more to it, as the Fur doesn’t really look much like Martian Ironearth, but I’m afraid of going too far, so have called a halt for the time being. I’ve also added in some Martian Ironearth to the rear tracks in an effort to make it look like those tracks have clogged up a bit.

Overall, it’s perfectly serviceable I think. I do want to try and get better and improve, and after showing it off to some folks at the store, I’ve been pointed in the direction of weathering powders, so I think I might investigate those next!

So what else has been going on this week?

My local store is doing an "Armies on a Plate" event (not sure if that's the official name, but it's a diorama on a 160mm base thing) and this is roughly what my entry will be looking like. I can't decide if I want more Tyranids though… #Warhammer40k #SpaceMarines #Deathwatch #Tyranids #awesome

First of all, my store is also having a bit of a painting competition like an Armies on Parade redux, involving a 160mm base. I can’t recall if I’ve mentioned this already, but it sounds hilarious, so I’m going for it! I’m going to have some of my already-painted Deathwatch marines going up against some Tyranid bugs, so chose the Zoanthrope kit because it looks absolutely hilarious! The initial idea was basically what I posted on instagram: three marines against one Zoanthrope, but I’ve since built up the other two models for the kit, and am thinking I might try to squeeze on the whole brood:

These #Tyranid #zoanthropes have got to be the most hilarious models I have ever had the enjoyment of building. I mean – look at them! So cute! With their little grins and over-extended brains! I love them! My new dream is a Tyranid army composed entirely of these guys! And maybe a Maleceptor. For added psychic-ness! #Warhammer40k

These models are amazing – really easy to build, but those cheesy grins! I love them! I don’t actually know if all three will fit on the base, especially as I’ve also been considering adding more marines, but I’ll certainly paint them up as a threesome. I’ve long nursed ideas for having some kind of Tyranid force, but have never been able to settle on any kind of colour scheme. I love the Behemoth scheme, but have always wanted to try Eumenides. I even bought some cheap Termagaunts to practice on, but that didn’t turn out well at all. Last year, I bought a Carnifex in an effort to break out of a painting funk, and attempted to do my own colour scheme, but having build the monster first, that hasn’t ended well, and he’s still in this condition:

However, my current plan is to go with my own scheme, though different to the Carnifex above: pale blue body, and shocking pink carapace. I’m still not sure how I’m going to do any of that yet, but the competition isn’t being judged until 18 December (my birthday!) so I should have enough time to get something ready.

That’s pretty much been it for progress this week! I’ve done a few odd bits, as always, but certainly nothing to write home about. For a few weeks now, it’s been all about the Alpha Legion – or at least, it’s felt that way! So I’m thinking about doing something different next, maybe turning back to some of the many Necron projects I still have ongoing. My legion currently stands at 1270 points with all the fancy upgrades and stuff, so is certainly getting there and all that! I’ve also been thinking about what to do next for that – I know I should do another tactical squad and get the minimum force org done, but I’m thinking instead of an all-flamer tactical support squad. I guess we’ll see!!

One thought on “Hobby Progress, week 45”