Hey everybody!
It’s week 40! My goodness, forty weeks of painting little dudes! Well, maybe not quite painting for that entire time, but still! This week has seen quite a bit of progress here, so let’s take a look!

Those four Alpha Legion marines I mentioned last week have been finished, and while there are a couple of bits that I’m not happy with (eyes, for instance), overall it’s really great to have the three squads of veteran tactical marines finished! 610 points of Alpha Legion, ready to be demolished on the tabletop by my inability to roll dice effectively! 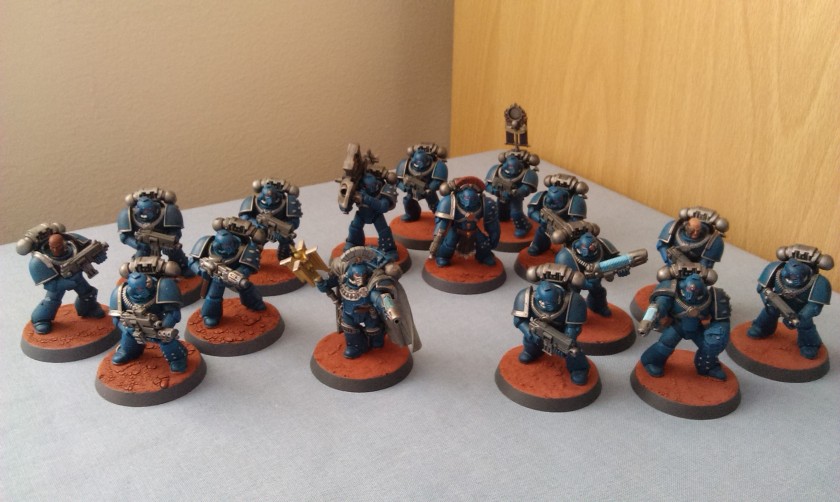 I’m really happy with the looks of these guys overall, and I’m looking forward to continue adding some more to them as time goes on. I’ve still got the Contemptor Dreadnought to get finished, which I’m kinda looking forward to – all that silver, can’t wait!

I’ve also made a Forge World order this week – Mk IV Heavy Support Squad, with plasma cannons, and a Mk IV Recon Squad. I’m hoping that with these chaps, I can get more of an Alpha Legion feel to the army! The recon people are definitely going to help, and I read recently that the Legion had a lot of plasma weaponry, hence that squad on the right there, so I’m thinking plasma cannons should be on-point there. I think the next tactical squad I build will also feature more of it anyway!

So what else has been going on? 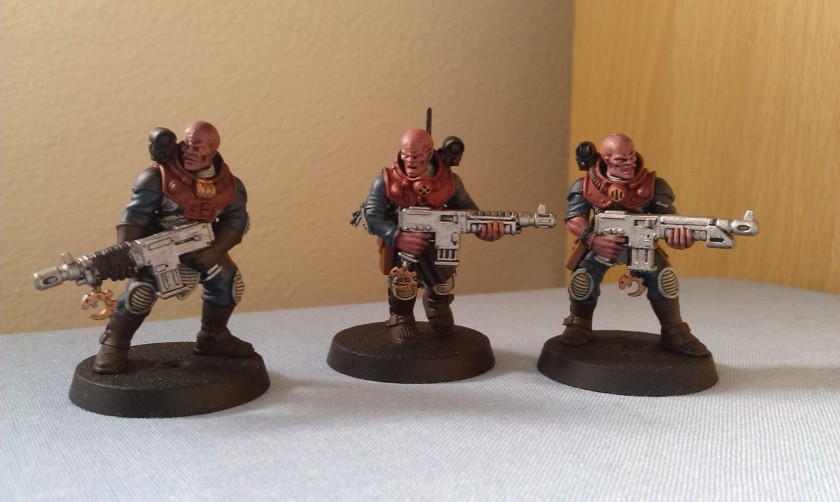 Well, I’ve been working on three test models for the Genestealer Cult – I’m doing the Bladed Cog, but these models are really quite detailed, not to mention small, but I do like the look of them as they’re slowly coming together there! I’ve spent a few hours on these now, and they’re only half done… Bah! Still, I’m hoping that, as with the Alpha Legion chaps, I can manage to somehow get a quick way of doing these… we’ll see!

I’ve also been building more stuff, naturally! As well as having all of the miniatures from Overkill, I’ve bought a box each of the new Genestealer Cult chaps, and built up the five Acolyte Hybrids much as they appear on the box, I suppose. Mainly because of the hilarious look to some of them, like the chap there with that rock saw thing! They still need to be primed, so I’ve not gotten anywhere yet with them. I’ve also now finished building the first sprue of cultists from Overkill, so I just have one more to get through there… It’s gonna be so rewarding when it’s done, I’m sure, but right now, I feel like I have a very long road ahead of me!

And more Militarum Tempestus guys! I built up two of these months ago – back when I’d originally started to build Genestealer Cultists from Overkill, ironically – so have made some effort to get moving on the rest of the squad. I’m not entirely sure what I plan to do with them – over the weekend, I’ve gone from “just another project” to thinking of painting them as Geno Five-Two Chiliad from Legion, and now have decided to paint them in the colours of the 55th Alphic Hydras! The colour scheme interests me, and in a stroke of coincidence, that army has a particularly close relationship with the Ultramarines, so I think that’s enough reason to do them in that scheme! So I hope these will be some more light relief from all the ongoing army projects I have, and the ornate armour and all the faces will hopefully continue to provide me with painting practice! We shall see…

That about covers it for this week, anyhow! I’m expecting my progress to slow down over the coming weeks, as I get into the swing of things with my final degree course. But hopefully I’ll have some Contemptor Dreadnought progress to show off next week, and maybe some more Genestealer Cultist action as well!

It’s also Armies on Parade on Saturday, so expect to see some pictures from my finished board!!