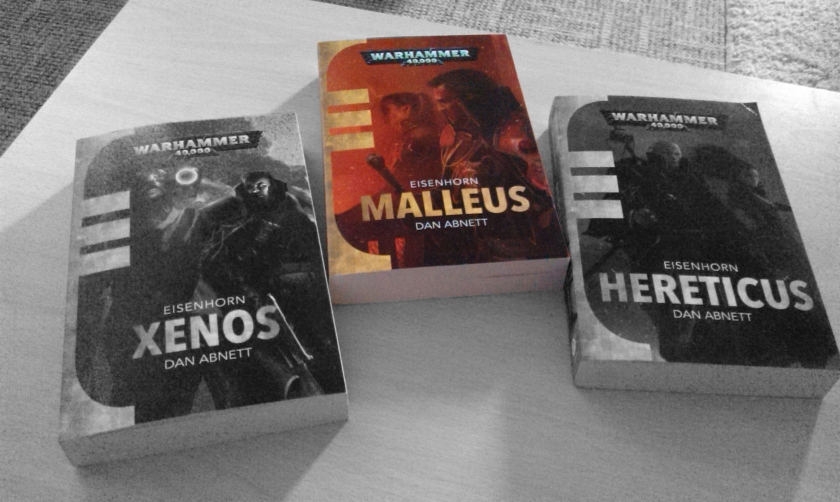 Malleus is the second book in the Eisenhorn trilogy, and I have to say, I really enjoyed this book a lot more than the first! The book picks up a century after the first, with Inquisitor Eisenhorn still hunting out the enemies of the Imperium. At first I felt a bit cheated by this huge change, as I’m sure there could have been plenty of story to tell in the intervening years, but anyway. His team has changed, inevitably, with Bequin now heading up a ‘Distaff’ of psychic blanks, and the young Interrogator, Gideon Ravenor, who will later go on to have his own trilogy.

The story is really good, and follows the trail of the demonhost Cherubael, who we met briefly in the first book. During a triumph celebration, a massive attack is launched in order to free a group of 33 psyker prisoners – or more accurately, one alpha-plus psyker known as Esarhaddon. The plot thickens due to the fact Eisenhorn is implicated as a heretic following a transmission from a fellow inquisitor where Cherubael suggests he and Eisenhorn are working together. The trail for Esarhaddon leads Eisenhorn to Cadia where, just as it seems things might be going to plan, the Inquisition catches up with them and places him under arrest. He escapes and begins to implement his plan against the demonhost, resulting in a climactic battle. The epilogue is absolutely incredible!

I wasn’t entirely sure about Xenos, but Malleus is such a great book, I’m now completely sold on this series! One of the most enjoyable sections of this novel was that spent with Eisenhorn at home in Thracian Primaris, where we see something of the more ordinary life of the Inquisitor. The whole sequence with the triumph was nicely done, and I have to say, I felt a little thrill at getting to visit Cadia!

Indeed, something I’ve found myself appreciating about this series more than any other so far is seeing the little bits and pieces that I’m familiar with from the 40k universe realised in an actual narrative form – and a grown-up narrative, at that. I mean, we know about Nurgle and Slaanesh, and Cadia and the Ordo Malleus from the game, you know? But seeing how someone with Dan Abnett’s flair for storytelling puts all of these pieces together into a brilliantly cohesive story is really quite magnificent!

I had been reading these novels interspersed with the Powder Mage trilogy, but I’ve decided to move directly on to Hereticus now, so I’ll be back with my review soon!