Hey everybody,
Today’s game day is all about this bad boy that was announced last week at GenCon: RuneWars, the Miniatures Game. Yes, I’m still reeling!

First of all, something I talked about briefly in my GenCon blog last week is how big for the company this development is. FFG have previously made wargames, such as Dust Warfare, but for years now they appear to have been happy to produce more regular board- and card-games. Edging back into the market that is still primarily dominated by Games Workshop is a really interesting development, especially considering the fact FFG license Warhammer. I find this really interesting, and can’t wait to see where they go with it! 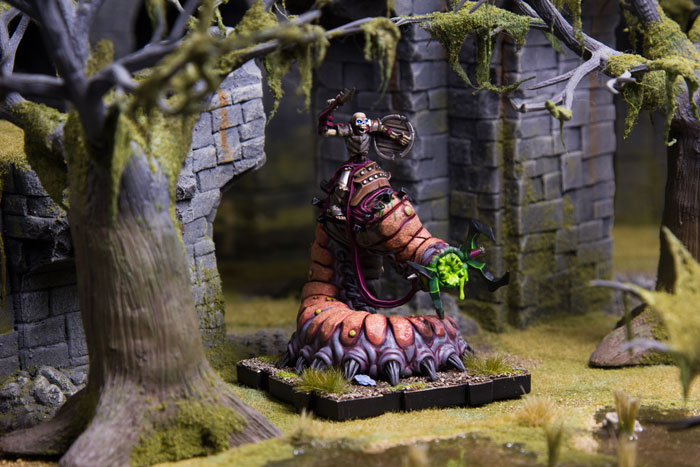 The game itself looks a whole lot like X-Wing, with movement dials and templates, even the upgrade cards. I actually can’t decide if this is a good move or not – though it does feel right that FFG have their own mechanic for all their wargames. The rank-and-file thing I can kinda take or leave, though I know a lot of wargamers like that. Something that put me off the idea with Warhammer was how it would limit the modelling options of some units, as you’d need to get them to fit together. However, it seems as though it won’t matter here, as the models are pre-assembled (but not pre-painted)

With all the templates, dials and cards, not to mention the custom dice that are also involved, it looks like the game could get a bit messy, but I suppose that will depend on how the rules for army-building work – I mean, the only video overview of the rules I’ve come across from the convention so far suggests games last no longer than 90 minutes, so I don’t imagine armies will be that large…

At any rate, this game looks pretty epic, and I’m actually really excited to see FFG launch this game with the Terrinoth theme! While some folks are sharing their uneasiness over what this means for Battlelore, not to mention their relationship with GW, I’m sure it’ll be a hit, and as I’ve already said, I look forward to seeing what they do with the line in the future!

One thought on “RuneWars, the Miniatures Game”