Hey everybody!
It’s GenCon 2016, the best four days in gaming, and this is my attempt to round up all of the stuff that I think looks particularly amazing as the weekend rolls on! 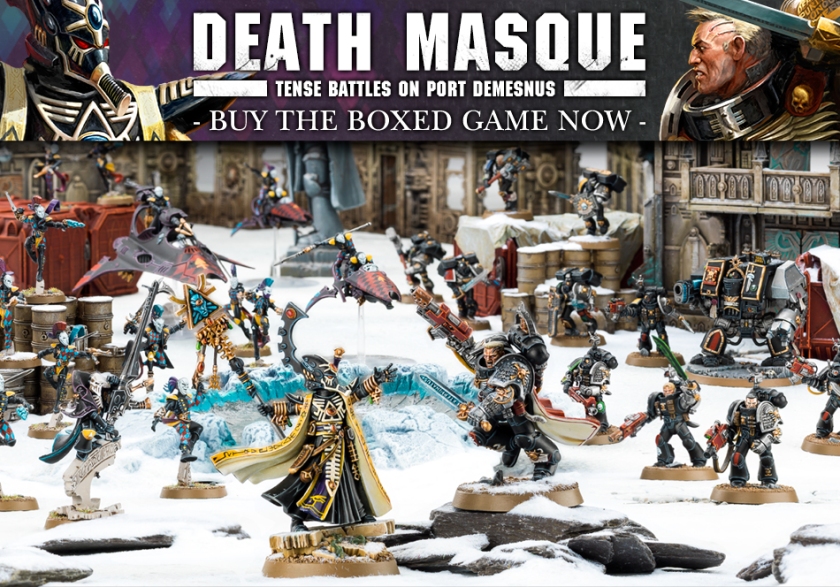 Let’s start with something not announced at the con, but is definitely worth a mention all the same – Death Masque, the new boxed game for Warhammer 40k that appears to be replacing the current intro box, Dark Vengeance. Games Workshop are really pushing Deathwatch stuff, it seems, following the Overkill boxed game earlier in the year. Along with the game, which features Harlequins vs Deathwatch Marines, they’ve got the new codex and data cards available for pre-order this weekend, to allow for quite the launch for the latest additions to the 40k line. I really like the whole Deathwatch idea and lore, so will no doubt be picking up the codex next weekend, though the box set might have to wait for a while. Especially seeing as how I’ve got so many other projects on the go!

From demos to tournaments, here's what we've got going on at #GenCon2016: https://t.co/li008LrVk9 pic.twitter.com/A1ocgveRt6

Fantasy Flight Games are always the company I’m most interested in at GenCon, so let’s move on to see what they’re currently up to. In recent years, they’ve taken to making most of their announcements in the weeks leading up to the convention, saving just one or two showstoppers for the actual event itself, and 2016 is no different there. I’ve already talked about the new Star Wars dice game here, but let’s take a look at what else is going on…

Imperial Assault is getting a new small-box expansion later in the year, centred on Jabba’s Palace. Looks amazing, though this is a game I have unfortunately barely played, so I’m questioning the need to actually buy this when it launches. You can bet your ass, of course, if I manage to make this game into a regular thing, I’ll be snapping it up! Jabba is also one of the new hero/villain releases accompanying the game, as well as a new Luke Skywalker.

The figures of Jabba's Realm, including our beloved Rancor. #StarWars #GenCon2016 #ImperialAssault pic.twitter.com/9pjZovgpfR

Mansions of Madness is a Descent-style game that I’ve owned for years but never gotten round to featuring on the blog. It’s a really great, thematic game, but there hadn’t been any news on it for a long time, until FFG announced the new second edition a couple of weeks ago. Looks to involve an app similar to the Road to Legend app for Descent, though I’m currently undecided – I’m not about to go buy the second edition, owning all of first edition anyway, but I’m not sure if it would be the same experience. The game launched at GenCon, anyway, and seems to be getting a lot of hype from folks across the internet, so there is that!

More exciting from my perspective is the new Arkham Horror LCG. I’d heard about this recently as a rumour, but the announcement last week really got me excited for what looks to be an awesome gameplay experience! Looks similar to Elder Sign in parts, though the RPG-like feel to the whole thing has got me incredibly excited, so this is definitely on the Christmas list!

Hell comes to your #tabletop this fall with DOOM: The Board Game: https://t.co/TDo0Thfd68 @DOOM pic.twitter.com/w7AVGILNxu

Doom is a classic of the boardgame world, though I’ve never had the opportunity to play it previously. All I can say on this right now is, the miniatures look incredible! And speaking of miniatures…

I was honestly not expecting this, and I’m still not entirely recovered from my shock following yesterday’s announcement! The “original” Runewars is a game I’ve played but once, though it’s still fantastic, and I’ve been wanting to feature it on the blog for a while now. Set in the same universe as Rune Age and Battlelore, it’s a game I’d thought dead, especially given the popularity of Battlelore nowadays.

It’s not just the fact that this is a new game set in the Terrinoth universe, this is a huge deal for FFG. A rank-and-file miniatures war game is a huge thing for any company, and to see them do this really warms my heart, as it feels like we’re seeing more games that have that juggernaut feel to them from the company. Horus Heresy, Runewars, and Twilight Imperium are all games that fit the classic mould, and it looks like FFG are perhaps making a return to that style of game here.

Very exciting times are ahead, I feel!

What’s been going on at the In-Flight Report this year, then?

Imperial Assault app companion is being worked on! @FFGames pic.twitter.com/N8NRZw4k0J

Interesting stuff there, looks like FFG are making a lot of these app-driven games since X-Com…

The #L5R LCG is currently in development and will be launched at next year's Gen Con. #FFGInFlight pic.twitter.com/W2Y01jjukN

Announced a while back, Legend of the Five Rings has another year to go before it arrives, but that should allow for FFG to make it pretty awesome. I’m not slavering for it, but it’s probably going to be picked up when it comes out, so there is that! Any LCG from Fantasy Flight is amazing, after all!

Looks like a pair of “expansions” to second edition of Mansions of Madness, which feature content from the first edition core set and expansions. Seems like second edition might be worth looking into more deeply after all!

Wave 10 for X-Wing (sorry, Wave X!) is coming, with ships from Rebels and The Force Awakens. I’m genuinely surprised they’ve managed to keep going so long with this game, I thought they would have shifted to a cards-only supplement style of expansion before now!

Finally, we are proud to announce the Runewars miniatures game! #FFGInFlight pic.twitter.com/IIktC60jnG

This is here because I still can’t get over my shock!

I’ve been seeing a lot of positive vibes around this game across Twitter, so I’m thinking that I’ll definitely try it out once it’s released…

I still can’t get over this Runewars announcement…

While there was a lot of amazing stuff coming out of the In-Flight Report this year, I’m more surprised by what hasn’t been announced at GenCon this year – a new big box expansion for Eldritch Horror, and anything about Warhammer Quest the card game. I find this lack of anything fairly suspicious, so it’ll bear keeping an eye on in the future, I think…

But what about the other companies out there?

Star Wars and Carcassonne… I don’t even… I mean, why?! Carcassonne is a good game, but I feel that perhaps some of the expansions for the main game have shown just how far that game can be taken, so instead we’re getting a lot of re-skins, which I suppose are okay if you like the theme, but seriously, why don’t you just get the main game? Hm.

Legendary meets Buffy as the next IP @upperdeckent

Having recently bought the boxset to rediscover my love for Buffy, this is perhaps some of the most exciting news to come out of Gen Con for me this year! A co-op game sounds super interesting, and I love the Legendary thing, so definitely going to snap this one up when it comes out, that’s for sure!

Okay, so I had the game Mythic Battles, and I sold it after having never played it in the 2+ years of ownership. These miniatures look so incredibly beautiful, however, that I may have to keep an eye on this bad boy…

The Trederra invasion is on! (Brimstone)

Flying Frog haven’t officially shared anything (yet), but a few people have been posting up pictures of the stuff they’re picking up as part of wave 1.5 of Shadows of Brimstone, and it does look kinda neat, I have to say. I’m still a bit bummed by the fact that I don’t have a lot of the stuff that I backed, but as many others have pointed out, the kickstarter was a hell of a deal, so I’m not complaining too loudly!

What’s very interesting, to me, is this news:

Forbidden Fortress: standalone set, compatible with SoB, to be Kickstarted next year. Belly of the Beast is inside a giant monster.

It’s interesting to me because I don’t have a lot of games with this theme, but it’s something I would like to explore in more depth. The fact that it’s going to be a kickstarter is not exactly getting my juices going, but y’know, I think FFP might have learnt from the Shadows of Brimstone experience, and perhaps things will be better this time around. I’m cautiously optimistic, though I might pass until it actually hits retail, so I guess we’ll see how things pan out. Of course, I’m quite sad they’ve had to put all of their other games on hold while they fulfill the SoB pledges, as I’m keen to see where they take Fortune & Glory, and A Touch of Evil, next!

Of course, FFP don’t have the only Oriental-themed game coming soon:

My favourite game designer, Eric Lang, has come up with, well…

It's a game about honour, negotiation and warfare in a feudal Japan where the ancient gods (Kami) have returned to remake the empire.

…with beautiful minis, as always!

Sneak peak at some of the gorgeous minis ❤️ pic.twitter.com/bOl6nAoLKQ

I should try to contain myself, though that might be very difficult!

That’s all for now! I’ll be updating here whenever I find more interesting stuff to share, so don’t think it’s over yet!