It’s game day! I feel like I’ve been looking at a lot of card games lately, so it’s time to take a look at something more board-game-y today, as we head back to Lovecraftian horror at the coast with the Innsmouth Horror expansion to the popular Arkham Horror line! 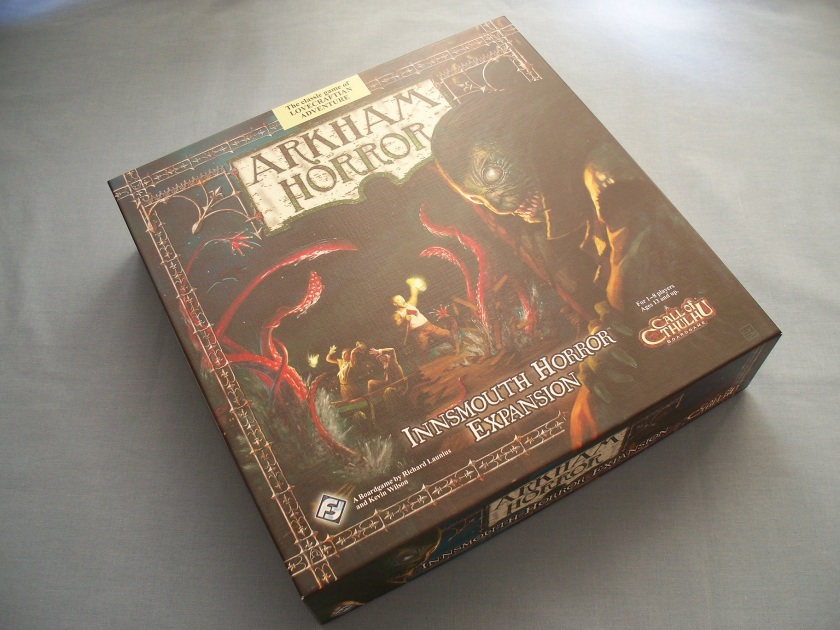 Innsmouth Horror was the penultimate big-box expansion to the game, and the last to feature a new board that expands the world of the game. In keeping with the previous “town” expansions that added some new universal mechanics that could be taken in any game of Arkham Horror, Innsmouth Horror introduces Personal Stories for the Investigators, which add something of a roleplaying element to the game. Each Investigator has a pair of cards (and cards are included for each other Investigator in the game line), one of which features some kind of task for the player to accomplish, the other is a double-faced card featuring a permanent effect that takes place depending on whether that task was met or missed. 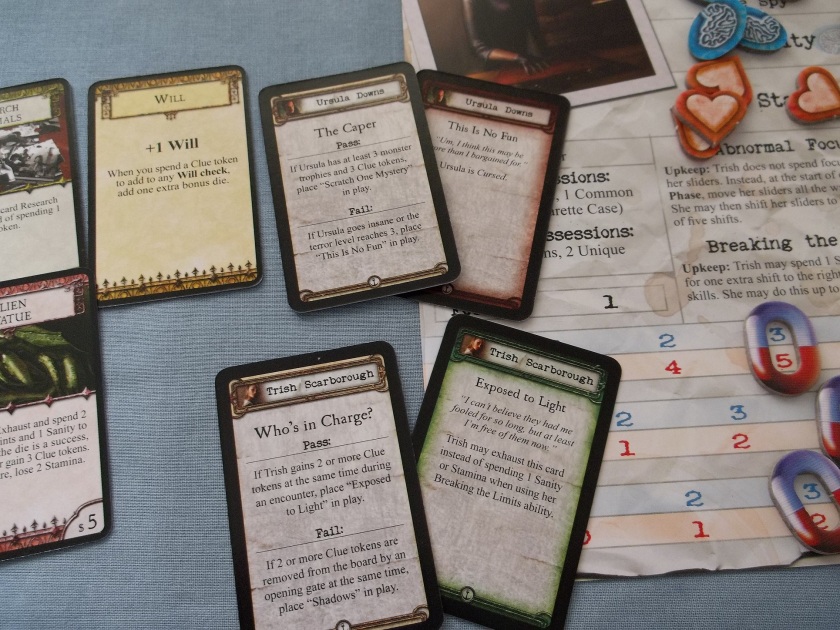 They are a fun element, though you’re often focused on the actual game and some of them just don’t really factor into the overall strategy you’re going for. At least, that’s been my experience with the cards. I mean, some of them, like Trish Scarborough’s card above, have an effect that will likely happen over the course of the game anyway, but there are others that require the Investigator to do something, usually discarding clues, to gain an ability which can be highly circumstantial. They’re certainly fun additions, and I always like to try some out if I’m using an Investigator I’ve not played for a while, but I wouldn’t always think to use them. 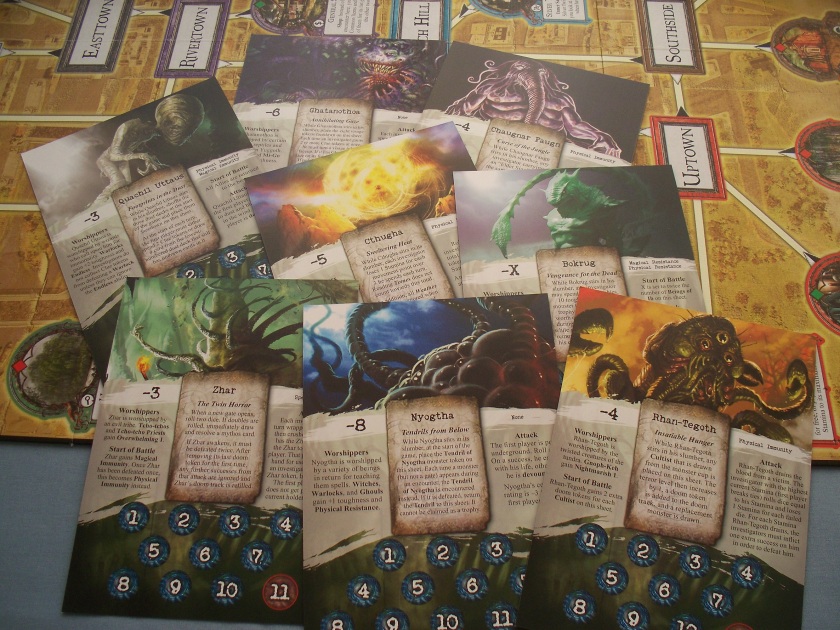 The new Ancient Ones are pretty tough to beat, if I’m honest, with a lot of rules to keep track of as shown on the sheets above. I’ve lost count of the amount of times I’ve forgotten to do something for the entire game, just because there’s so much going on with their abilities there! In addition to the eight new Ancient Ones (and two Heralds), we get a total of sixteen new Investigators! That’s the same number as Dunwich Horror and Kingsport Horror combined, and the same number as in the core game! Things like this make Innsmouth Horror feel like the last expansion to the game – though that honour would go to Miskatonic Horror, an awesome box that I hope to get round to reviewing soon! 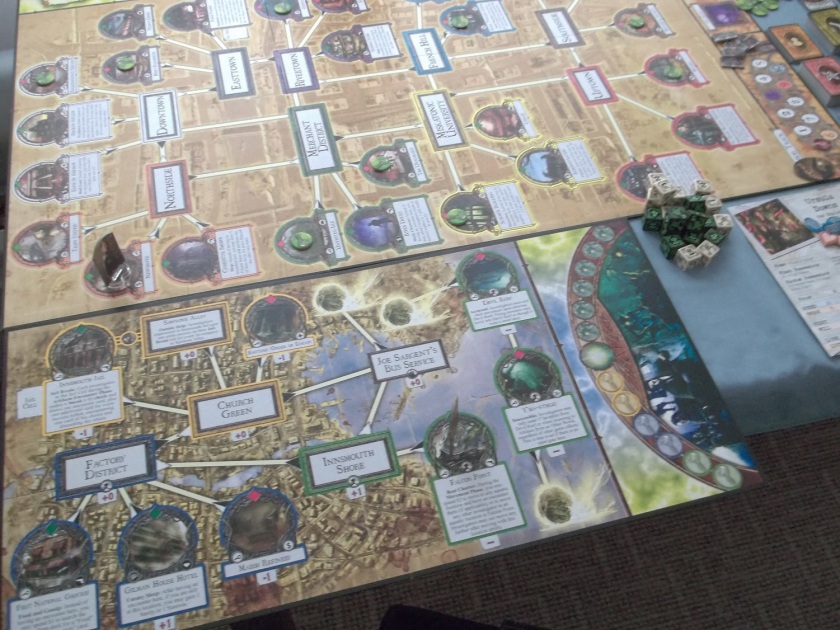 The new board is an interesting addition, having three new districts as per the established pattern, though there are tons of new rules to go through for the new board, which really makes it feel like a different location!

First of all, we have Martial Law. If the Ancient One’s doom track is over halfway filled, then Martial Law is declared and Investigators need to pass an evade check whenever they end their movement in an Innsmouth location, the check being modified by the numbers below the board space names. If they fail, they are sent to the jail in Innsmouth. This always causes the Investigator to become delayed.

Being a coastal town, movement between the various game boards is somewhat easier with Aquatic spaces – for the monsters, that is! Both the River Docks and Unvisited Isle are considered connected to the aquatic spaces on Innsmouth, and monsters can move to the closest Investigator across boards in this way.

The track along the right-hand side of the board tracks the Deep Ones Rising. Each time a gate is prevented from opening, the track moves up one space. If the Deep One track is ever full, then the Ancient One awakens! To make matters worse, there are vortex spaces on the board that can have monsters move into them as part of their normal movement. Each time a monster enters a vortex, both the terror level and Deep One track rises! However, Investigators can spend clues while in the various neighbourhoods of Innsmouth to fill the opposing Federal Raids track, and if this track is ever full, both it and the Deep Ones track are emptied. In the late game, as more Elder Signs (and monsters) are on the board, these tracks become a constant battle for the players to control, reflecting the growing influence of the Ancient Ones over Innsmouth!

Those are really all of the rules changes/additions, the game is otherwise very similar to any other Arkham experience, though obviously with much more going on! Of all the expansions, Innsmouth Horror holds a special place for many players because of the Innsmouth Look cards. A small deck of cards that are drawn through a variety of game effects, most of them do nothing, but one card tells you that, in fact, you have begun to take on the scaled appearance of the Deep Ones, and are thus devoured! It’s a wonderfully tense moment when you draw the card, and for something so straightforward, is probably my favourite of all the new additions in this box.

Innsmouth Horror is definitely worthwhile adding to any collection of Arkham Horror. While probably not as important as Dunwich Horror, it still adds a whole lot of replayability with the new Investigators and such, and the new board adds a whole other level of strategy as you try to split your party to control the goings-on down by the sea. 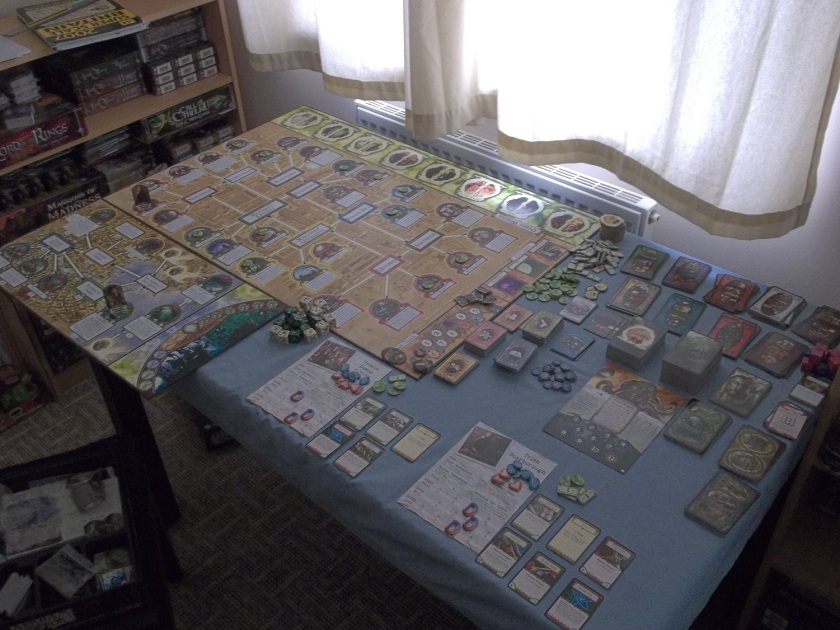 4 thoughts on “Come on down to Innsmouth!”