Hey everybody,
It’s week 24 of my Hobby Progress blog, where I show off some of the awesome stuff that I’ve been doing to progress with my various Warhammer projects – and various really is the theme! As hinted at last week, this week’s report is going off on the deep end with Chaos, let’s take a look!

Yes, this happened. I feel like I need to provide some kind of explanation for this, as I feel most people who have followed this progress series – or, indeed, almost anything that I’ve written on this blog – might be a little startled by what appears to be such a left-turn in my hobby career.

I’ve talked previously about how I first got interested in Warhammer through the card game, Warhammer: Invasion. That’s still one of my all-time favourite games, and I’m still amazed that I’ve made it through more than two years of blogging about games without doing a spotlight on it… Anyway, the card game is just great, and while I haven’t played it in a while, my all-time favourite deck to play is a Chaos one. I think I’ve tried out every kind of deck in my time playing the game, but Chaos is by far and away the one for me. Indeed, because of this, it’s more weird that I haven’t gotten any Chaos models sooner, really! (Well, there was that Demon Prince…)

So I managed to pick up a box of Bloodletters super-cheap recently, and I’d long been thinking about getting some Bloodreavers or similar because I know I’m not very good at painting skin, but would like to get better. So I decided I would like to get a small warband together of Chaos dudes: the plan was to get some Bloodreavers, led by a Bloodsecrator, and include a small band of Bloodletters. Initially that was going to be it, but then I thought it’d be nice to have the Herald of Khorne miniature in there, too, so I bought him last weekend.

But then, there’s Slaanesh…

Again, if you’ve been following my hobby adventures, you’ll know that I’ve painted my Ogors purple. I have quite a number of these guys, though only one has actually been finished so far. At any rate, one of the reasons for this is that I like the idea of Slaaneshi Ogors, but I also just think that, of all the Chaos gods, Slaanesh is the coolest. That isn’t because I’m a perverted degenerate (I think), but more because Khorne is all brutal, Nurgle is just disgusting, and Tzeentch is pretty but weird. Slaanesh is also weird, but there’s a distinct elegance to his stuff most of the time, before it devolves into the obsessive behaviour stuff. There are a lot of art pieces for both the Invasion card game and Warhammer Fantasy Roleplay (which I also love, but haven’t featured yet) that feature Slaanesh cultists and the like, and they’re really quite beautiful.

On a tangent here, I feel like GW would be doing a great disservice to the community if they actually do get rid of Slaanesh, which many people seem to have been fearing is the plan for Age of Sigmar since its release last year. The Horned Rat has already displaced the Dark Prince in the pantheon, and I’m concerned that it would be something akin to dumbing down the franchise to do this permanently. Sure, there are problematic things with Slaanesh but, as pointed out in an excellent article recently featured on BolS, there is a way to do this that could still work, and I hope GW will find that way. Certainly, the short story from Christmas, Godless, implies there will be something to come on this subject. I may actually dedicate a blog more fully to this subject in the near future, anyway!

So anyway, I like the idea of Slaanesh, and as the instagram picture at the top of this article shows, I’ve also decided to go for a kit that I’ve liked the look of for a long time, the Seeker Chariot! Having seen just how amazing they look in fellow blogger altsain’s post from Tabletop Gamer’s Diary (which you should totally check out by the way, as there is some fantastic content to be found there), I decided to get one! Unfortunately, it came broken, so I’m waiting on a replacement sprue, but it looks fantastic, and I cannot wait to get started there!

I think my Slaanesh thing will be a little bigger than the warband described for Khorne – I’m concerned that GW might be about to get rid of the range, so I want to get at least one of everything, but I’m also thinking I might get another Seeker Chariot, and perhaps a third to make up as a Hellflayer. So, I’m really excited for that!

But onwards! What have I actually been doing this week? Well, the answer is: Bloodletters. I’ve actually only built six of the ten so far, and have sprayed the whole lot Mephiston red, so it feels little like I’ve been cheating to say I’ve painted anything this week, but there we have it, unfortunately! They do look absolutely great, however! 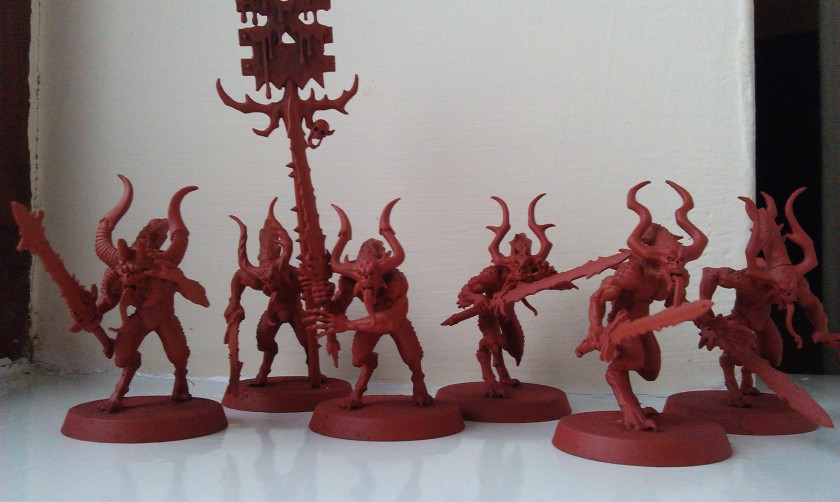 I’m very excited by these little devils, and while I’m probably going to go for a really simple and straightforward colourscheme, I’m looking forward to seeing them come together all the same!

That’s it for this week, anyway! I’m probably not going to have the time to do anything this coming week, as I’m on holiday, but you never know what next Sunday’s blog might bring… stay tuned!

One thought on “Hobby Progress, week 24”