It’s not-quite May the Fourth! So in celebration, I wanted to showcase an old favourite of mine, Star Wars Miniatures!

This tabletop miniature wargame was produced by Wizards of the Coast back between 2004 and 2010, partly in support of their RPG. The game featured 34mm miniatures, and was a collectible game that was distributed through blind-buy booster packs of little plastic minis. Sixteen sets were produced over the six years, featuring miniatures from right across the Star Wars universe, from Knights of the Old Republic to Legacy-era.

The game itself was fairly straightforward. Miniatures come with a stats card, which shows the abilities of each mini, along with the Hit Points, Attack and Defense ratings, and how much damage they deal in combat. Each mini also has a points cost, with which you can build squads for the skirmish game in something approaching a balanced manner.

So, you assemble your guys, and pitch battle to your foes – the goal of the game is to wipe out your opponent’s entire squad, though three Ultimate Missions books were published for the game, along with a couple of scenario sets for Endor and Hoth that give some element of thematic gaming.

To wipe out your enemies, you need to attack them, obviously. I seem to remember that ranged fighters can shoot across the entire map at you, while melee characters need to be much closer, base-to-base. When attacking, you roll a d20 and add your character’s attack value. If it is higher than your opponent’s defense value, you deal damage to the figure based on your damage rating. If you roll a natural 20 you deal double damage no matter what the defense rating, but if you roll a natural 1 then you miss no matter what. If a model’s HP is ever 0, it is removed from the game.

Now, that’s combat at it’s most basic. The game ran for 6 years, producing almost three sets a year on average, so there are a ton of mechanics for the game that alter the ebb and flow of battle, and some of the combos I’ve come across in my time are just insanity made manifest:

Arica (Mara Jade’s alter-ego) has Blaster Barrage, which allows her to attack each legal target once in her activation. She also has Twin Attack, which allows her to attack each opponent twice. She also has Cunning Attack, which gives her +4 attack and +10 damage against targets who have yet to activate. She also has Sniper, which means other characters do not provide cover for any of her attacks. I was once on the receiving end of this, and had seven miniatures wiped out in one attack frenzy.

Maris, who has 80HP remaining, moves adjacent to Vader (40HP left) and spends a Force Point to make a Lightsaber Assault, giving her two attacks. She has Twin Attack anyway, so she’ll be making four attacks. She hits him twice on the first attack, but his ability Dark Armor reduces damage received by 10 if he makes a saving roll of 11, which he does, so is left with 10HP. Vader has the Lightsaber Riposte ability that allows him to spend 1 Force Point to immediately counter-attack, so he successfully attacks and reduces Maris to 60HP. He also has the Djem So Style ability, which allows him to make an immediate counter-attack when hit with a melee attack. He successfully makes this, and reduces her further to 40HP. But Maris still has two attacks left, which she makes successfully – ordinarily, Vader would be dead at this point, but due to the order of attacks in the rules, Djem So Style will trigger before damage is applied, twice, which means Vader kills Maris as Maris kills him. That was an awesome little aristeia on the battlefield when it happened – I don’t even remember who I was controlling now, I just remember it’s awesome!

There are all sorts of weird and wonderful interactions like this, and it’s part of what kept me playing the game for so long, I think! Another part, of course, are the awesome miniatures! 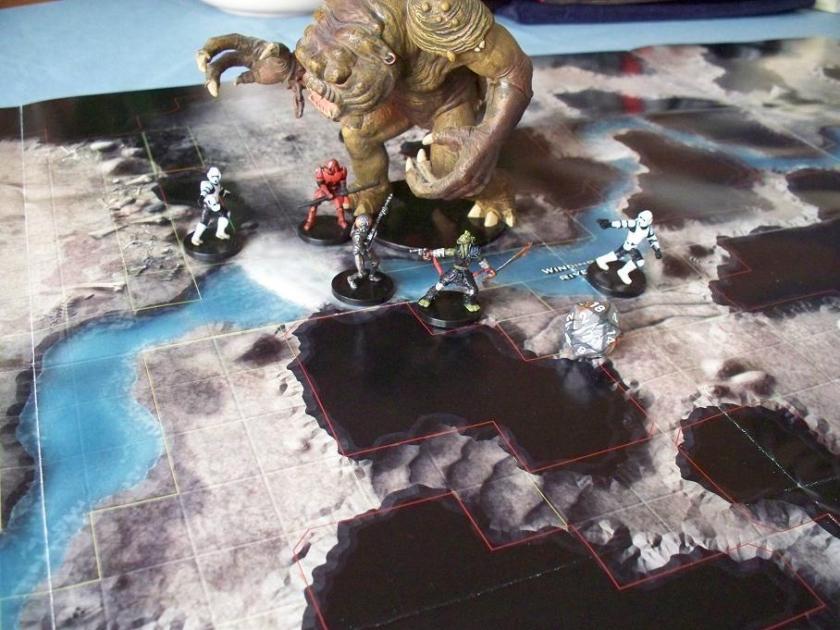 Over the course of the game, things changed of course. The first ten sets came in sets of 60 miniatures, and featured a number of scenario packs and intro packs as a way of allowing entry into the game. Universe, the third set, introduced huge miniatures into the game, such as the Rancor above, and this trend continued in two further sets – Bounty Hunters and The Force Unleashed. Scenario Packs continued after the Clone Wars set shifted distribution to 40 miniatures per set and redesigned the stat card, however the quality seemed to drop off a little, with some truly horrific sculpts and paint jobs featuring in the last six sets. However, both Imperial Entanglements (the new set when I eventually went all-in on the game) and Dark Times do have some really wonderful miniatures, and the final set, Masters of the Force, is noteworthy for including the Dejarik holomonsters which, I’m firmly convinced, would have formed a side-game if Wizards hadn’t announced dropping the Star Wars license a couple of months prior to the set’s release. 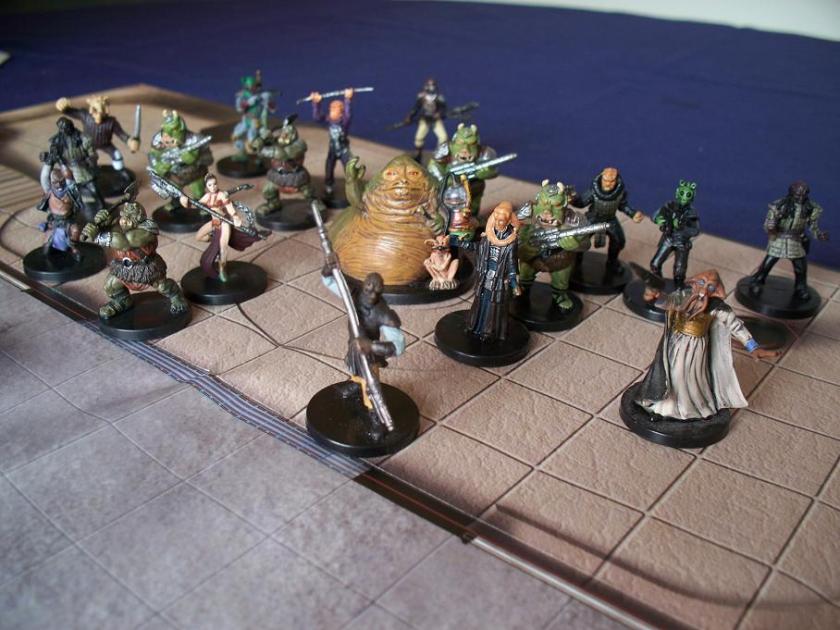 Of course, it’s not all figures – over the course of the game, there were vehicles and bigger droids produced, the massive Rancor figure from up there, and also the biggest “miniature” I’ve ever seen – the AT-AT walker!

I remember having to import this from Australia, as I couldn’t find one anywhere for sale in the UK. This thing is huge, and I think it’s pretty much in-scale with the rest of these things – the AT-AT Driver mini above certainly looks about right, anyway! This was a really special event upon release, and I remember it advertised with annoying frequency in comics and the like. I’ve never actually used it in the game, as it just seems too cumbersome, but by god, what an amazing addition to the collection!

I’ve talked before about Wizards and the way they went from fully supporting their game lines to almost-dropping the Star Wars licence overnight, so I won’t labour that point again here. Suffice it to say, it was a similar story to the Saga Edition RPG, where we had scenarios and map tiles produced that you could download from the site, then suddenly all of that just stopped. My favourite tiles include the Sarlacc pit, which is tremendous fun to use as a terrain feature!

I absolutely love this game. For the longest time, it was the only tabletop game I played. I invested so much effort and time into tracking down chase pieces, importing the blighters from the US at exorbitant costs in order to have Darth Revan, or Quinlan Vos, and it’s been a cause of no end of frustration to me that I actually owned every single thing for this game officially produced – except for the fabled Taris Undercity map:

Christopher West is the cartographer for most of the maps and tiles available in the game, and once Wizards stopped producing the game, he continued to produce maps – albeit more generic maps with the sci-fi theme – via Kickstarter, and buying the first five of these map bundles was actually my first foray into the crowdfunding website! Many of the pictures in this blog – that with the Rancor, for instance – are games being played on these fantastic maps. The reason I’m harping on about them is they’re still available via his website, and are of awesome quality, and really useful not just for this game, but if you like running RPGs with maps and minis.

It’s not just Christopher West who provides maps, of course. There are plenty of fan-made map tiles and full-size maps available to download and get printed up. One of my prized possessions is the Jabba’s Palace map, which is just spectacular, so much fun to play on. It has all of the locations from the movie, leading to so much thematic play!

After all these years, Star Wars miniatures are still fairly available on the open market, which continues to surprise me. The minis are pretty well compatible with FFG’s Imperial Assault, which I recall drove demand up for the older, pre-painted figures for a time. Having so many of these things, I’ve often considered down-sizing my collection, though in doing the prep for this blog, and checking out all of those photos once again, it’s brought back so many awesome memories that I feel this game is something I never want not to have.

So much of this game is bound up with my enjoyment of the Star Wars universe at large, I will freely admit that I’m probably looking back on most of this far too fondly. As I mentioned, the adverts for the new sets were in every new Star Wars comic that month, and whenever a new thing happened in the universe, such as the Legacy era being opened up, a line of miniatures wouldn’t be too far behind to support it. They may be kept in boxes on top of the wardrobe under an inch-thick layer of dust, but one day I might get them down again and put a squad together, and re-live those early days of my gaming life… That would be awesome! 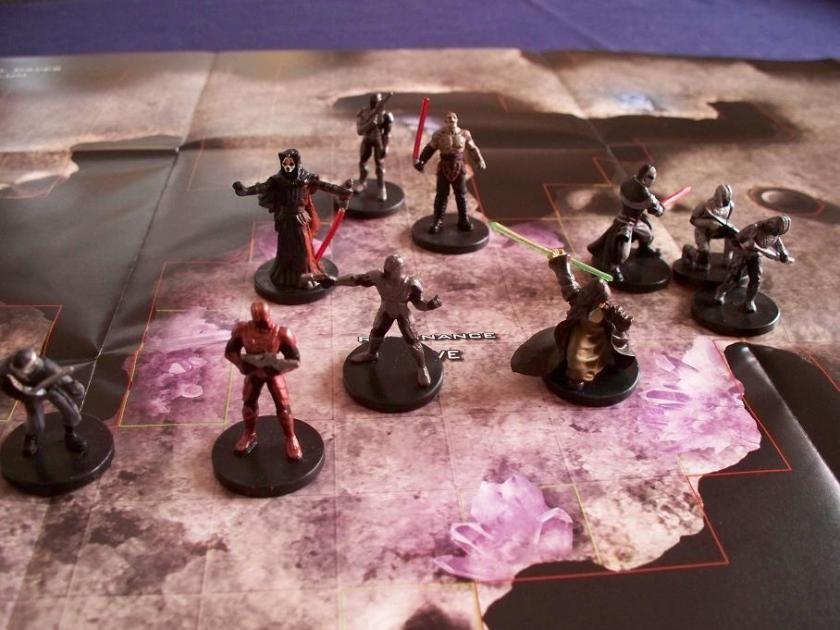 All of the photos in this blog have been shared on boardgamegeek over the years – you can check out the full range of my contributions here.