Well folks, it’s certainly better than last week, though not by much! While I have actually started to paint something again this week, it’s not a terrific deal, which is quite sad.

Last weekend I bought some Grey Knights, as you may remember, and have since built up one of them, which I have now applied a Leadbelcher base coat to. And that is it! 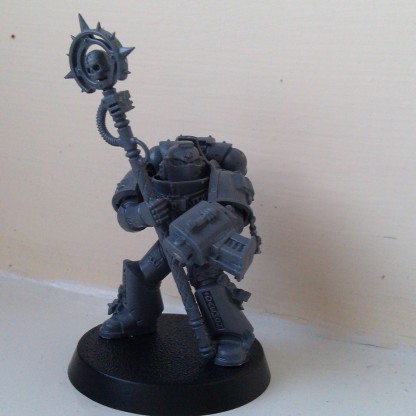 The miniature looks pretty nice, and in applying the layers of base coat to him, I found myself enjoying that level of creativity that painting minis affords – seeing something come to fruition before your very eyes. I intend to just plod along with this one for the time being, then see where I get to.

It’s good to be painting again, but I think this week might be only a small update because I’ve been caught up in working on an essay for the degree I’m still working at. There have been a couple of times where I’ve wanted to start working on something, but haven’t had the time, so hopefully the hobby fatigue I had been suffering from is on the way out now!

I’m not expecting to have a great deal to share next week, then, as the essay is due on Thursday. But you never know, I may get round to something before the seven days are up!