It’s birthday week here on spalanz.com, and time for a bit of game day extra, as I take a look at some more nostalgia from my childhood: The Real Ghostbusters: The Game! 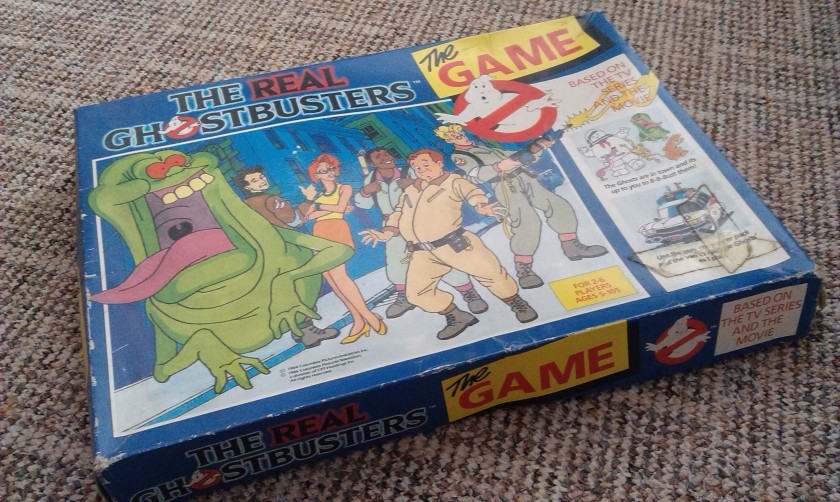 Oh, this one’s hilarious! Dating from 1989, the game is a tie-in to the cartoon series of the same name (more on that tomorrow!) You play one of the four Ghostbusters, or Janine or Slimer, and travel around the board trying to trap ghosts – once all the ghosts are trapped, the winner is the person who had the most.

Along the way, there are mechanics for player interaction where you can attempt to “spook” your opponents – basically by playing rock/paper/scissors – to take their kit cards. Without all three pieces of kit (proton pack, proton gun, trap), you can’t trap ghosts and so cannot win the game. When you come to trap ghosts, the “bust-o-meter” is spun to determine the strength of your stream: if it’s higher than the ghost’s slime value (listed on the side of the board), you trap it. That’s pretty much all there is to it, though Action cards do allow you to interact with the game a little more, such as moving to ghosts to trap them etc.

I had this game from new, and seem to remember trying to get my brother to play it with me back in the day. I found it in the attic when I moved a few years ago, along with another awesome retro game that will be featured here no doubt eventually, and convinced my regular gaming buddy Tony to play, but it didn’t really stand up to the test of time.

Something I wasn’t all that impressed by was just how easy it is to knock somebody out of the game entirely, by winning just one round of rock/paper/scissors. Given your ability in the game is based entirely on something so arbitrary is just bizarre, I thought – it feels more luck-based than any kind of dice game, somehow! Maybe I’m just not good at rock/paper/scissors, though?

At any rate, it was fun to revisit the past, but I can’t say I’d recommend hunting down a copy on ebay anytime soon!