It’s birthday week again at spalanz.com, as my blog turns two on Thursday – aww! To celebrate, I’m having another theme-week, though not quite as expansive as last year’s Indiana Jones week unfortunately. But it’s still amazing, as we once again return to a beloved franchise from the 1980s – it’s Ghostbusters!

I’ve got a couple of blogs coming later in the week that will be waxing lyrical on the movies and such, so you can definitely look forward to those, but it’s Tuesday, so it’s time for a game day blog – and one that I’ve been really looking forward to sharing with you guys: it’s the new board game from Cryptozoic! 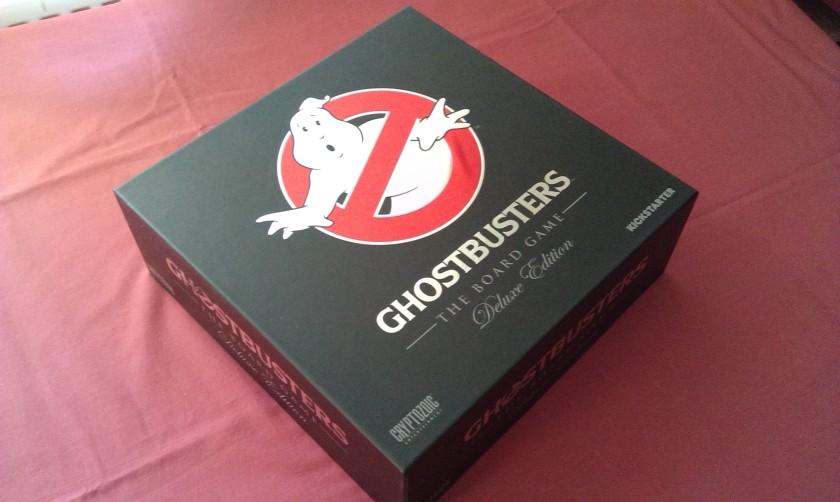 Well, it was new back last November, but anyway. This was a kickstarter game that was funded in March 2015, and eventually found its way to me later that year. It’s a relatively straightforward game, where you play one of the iconic four Ghostbusters – Ray Stantz, Peter Venkman, Egon Spengler, or Winston Zeddemore:

(Other Ghostbusters are available…)

During the game, you get the opportunity to level up your character by busting ghosts, which gives your character additional skills – it’s a simplified RPG-style system, and one that I am pretty impressed by! 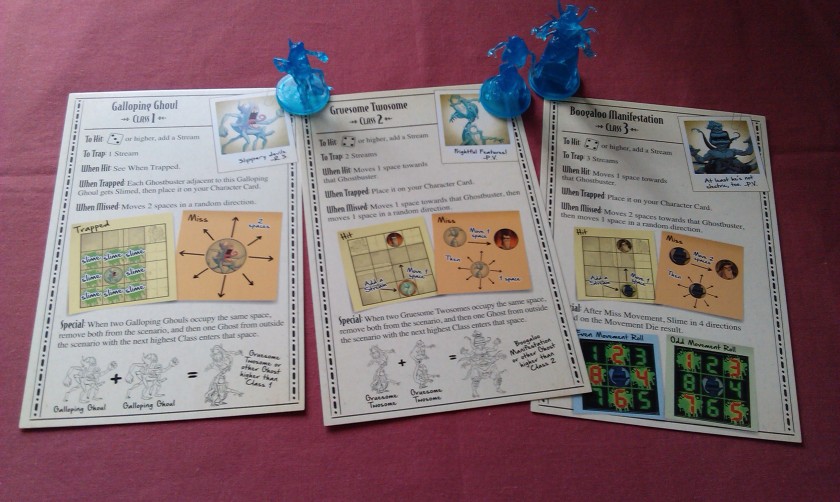 Ghosts come in different classes, which roughly denotes how difficult they are to deal with, and feature the mechanics used to both move and trap them (more on this shortly). The ghost miniatures are all this clear-blue plastic, with the exception of Stay Puft Marshmallow Man (white, obviously) and Slimer (in green). Something I think is really cool is that whenever a ghost moves into another ghost, they become a bigger threat, turning into a ghost of the next class up! Wonderful!

The game is played according to different scenarios, outlined on their own cards: 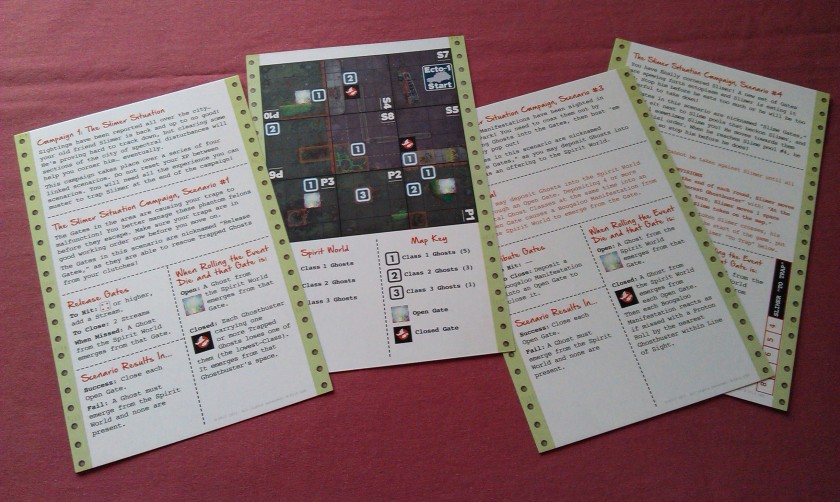 These cards show how to set up the map tiles, where to place ghost miniatures, etc, and feature the win conditions.

The game round is split between the Ghostbusters’ movement, any “end of round” effects, then the Event die is rolled. On a Ghostbuster’s turn, you have two actions to choose from, such as moving, aiding others, and combat. The main focus is of course combat, as you try to rid the streets of New York of all the paranormal manifestations!

Importantly, to hit a ghost, you must have line of sight to it – so any terrain features outlined on the map can potentially block you. You also need to be no more than 3 spaces away from it. Each ghost has a to hit and to trap value on its card – when you’re fighting it, you roll a d6 and try to equal or exceed the hit value. If you’re successful, you’ll get to put a proton stream marker underneath that ghost (as shown above, Egon has hit the Boogaloo Manifestation once, so he gets to put one stream token under it). Class 1 ghosts only require one stream token to trap them, so if you hit them, you get to remove them from the board and place them on your character sheet; otherwise, the ghosts will continue to move around with that stream token under them until they are trapped – hit enough times to have stream tokens under them equal to their to trap value. When this happens, the Ghostbuster who put the final stream token on the ghost gets it, but anyone else who had stream tokens under the ghost gets 1XP. Ghostbusters also have some abilities to gain additional XP from their abilities.

Once each Ghostbuster has had their allotted two actions, if the scenario card shows any end-of-round actions, they’ll happen, then the event die is rolled. This is a custom d6 with the Zener Card symbols (from Venkman’s test at the beginning of the movie?) – the scenario card tells you how many gates there are open on the map, represented by cardboard tokens as seen in the above photo. These gates also have the symbols on them, and if the symbol rolled matches an open gate, a new ghost will come out of it.

The way these ghosts come out is pretty nice, as well – there is another cardboard tile that represents a PKE meter, with numbers 1-8 around a central square. You roll a d8 to determine which square the ghost will emerge onto, imagining the gate tile as being the central square. The event die also has an eight-pointed Chaos star (if you’re familiar with Warhammer, you’ll know this one). This represents Chaos and each ghost on the map will move according to its reference card.

This is a really fun game, I like it a lot! The rulebook isn’t particularly great, which made my very first game a bit confusing as I tried to make sense of what I was doing in terms of the round structure or whatever, but once I got past that, I think it went pretty smoothly and I quickly got into it – after which, I quickly discovered that I really loved it!

The basic game that you can get at retail has a lot of fun, but the kickstarter version has got a whole ton of extras, and it would be remiss of me to not mention this. To be blunt, the kickstarter campaign was a bit of a mess. Almost all of the classic movie stuff was kickstarter exclusive, including the librarian, Gozer and the dogs, etc, which was something of a bizarre move from such an established game company. As of the time of this writing, there is a second game up on kickstarter, which has a lot of this kickstarter loot available in add-ons, and anyone who picked up this game at retail should definitely look into that. It’s not all of the content, unfortunately, but it’s a lot of it.

The scenarios are where the game shines of course, and there are plenty of them to keep you going through so much gaming, and they are a whole ton of fun.

Pick up a copy today!

One thought on “Who ya gonna call?”