Hey everybody!
It’s time for another game day here at spalanz.com, and I want to do something a little different today. For the last two years, I’ve been talking about tabletop games near enough every Tuesday, but I thought I’d change tack a little, and move into the realm of mobile games! Not the first time, of course, and probably not the last, but anyway!

A few years ago now, I bought a Nexus 7 because (a) I like Android as an operating system, and (b) I wanted a way to play Elder Sign: Omens. After downloading a few mobile versions of tabletop games, I started filling the tablet with free to download stuff from Magma Mobile. They have a whole host of games available, a lot of them centred around the adorable bubbles, such as Bubble Blast!

This game is a lot of fun, and a great way to spend the time when you’re on the bus or waiting for the microwave to ping. I actually came across it trying to find a bubble shooting type of game – you know the type where you fire a coloured bubble at similarly-coloured bubbles, in the hope of removing them before the ceiling comes down on you? Well, one of those. It’s not quite one of those games, but it’s fun, and with what feels like a zillion different holiday-themed variants (I particularly like the Christmas one, which has the option of replacing the bubbles with snowflakes).

Magma Mobile also has a bubble shooting game (they have a few, actually), though I think it’s hilarious to see just how many other types of games they’ve used their adorable little bubble character on! 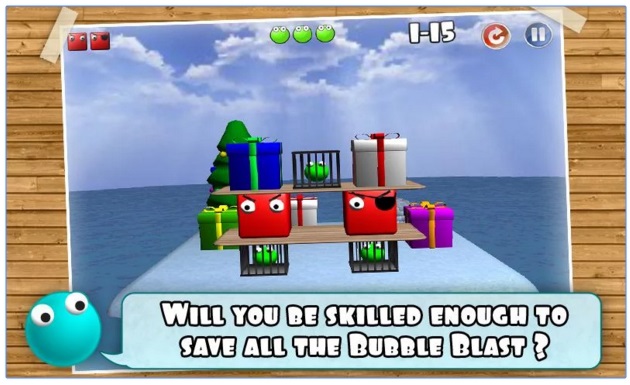 Bubble Blast Rescue was one of the first games I downloaded following the initial one, as it seemed hilarious! It’s one of the few games Magma Mobile develop that has a limited free portion, but the majority of the game comes through in-app purchases. The additional stuff is a couple of quid, so hardly going to break the bank, so I didn’t really mind that too much. You basically need to hurl bubbles at the obstacles in order to free the bubble friends trapped in the cages. You can rotate entirely around the iceberg/island/whatever to hit these things from all angles, but you need to avoid pushing the cages into the water! Something I hadn’t realised is that you can advance through the levels even if you’ve saved just one, but you need a perfect score if you want to get all the way through. The ice levels in particular are awful because the objects will slide along the iceberg even after you’ve hit them, and many times I’ve lost the cages to stuff sliding into them. It’s a fun game, but man is it annoying to lose just one!

A weird off-shot/amalgam of the genres worth mentioning is Bubble Blast Boxes, which combines those square blocks from Rescue with the idea of combining colours to make them disappear. It’s kinda funny to have these angry-looking boxes blinking at you as you try to manoeuvre them into position to link up and stuff!

Bubble Blast Marbles is another of these games where you’re trying to shoot bubbles at similar-coloured groups to clear them out, though twists the idea so that you’re trying to stop them escaping into a pyramid…because why not, right? I think more than anything, the hyper-cute sound effects make this a fun game to return to time and again – the bubbles just sound so happy when you blast them!

Bubble Blast Falldown is kind of a weird platform-like game, where the screen rolls up but you need to keep the bubble on-screen, so you have to move it from side to side to fall down the gaps between the platforms. There are lots of other things to do like collect money, gain friends to have multiple bubbles knocking around, and bonuses available to slow things down or destroy any walls that impede your movement across the wraparound screen. It’s the sort of thing I often find myself playing a whole lot longer than I expected, as I just need to try and improve just that little bit more!

Saving the best (in my opinion) til last, we have Bubble Blast Adventure!

This game, above all the others, feels like an actual platform-based video game, where you move your bubble guy through the game collecting coins, avoiding traps and hazards, shooting the hilarious evil-looking blocks, and all the rest of it. I only discovered this one around last Christmas, and played the hell out of it until I got to a level that I just can’t seem to get past. It’s so frustrating I haven’t really done that much with it since. But the early levels are still a whole ton of fun to play, all the same!

I’m not a huge video-game player, though I do like some of these simple mobile games. At some point, I’ll probably get round to taking a look at some more, though next week will be something particularly special – my blog turns two, so it’ll be time to celebrate in style!