Hey everybody!
It’s part two of my Star Wars Easter! Always an exciting time, as I feel more of a connection to the original trilogy and stuff. Indeed, watching them again this year, more than any other time in recent memory, has almost felt like re-setting myself as regards Star Wars. Let me ramble for a bit…

I’ve made a few posts on this blog that have had some inchoate rambling about the state of Star Wars today, and the loss of the wonderfulness that is the expanded universe. I’ve been reflecting on this again recently, largely following my reading of A New Dawn I suppose, which is a tremendous book, and I think if I’d read it two years ago when it was first published, I would likely have had an entirely different feeling towards this. See, that book is a fantastic way to set up this new publishing era, and really lives up to its meta-intent of providing us book fans with a new dawn of Star Wars storytelling. I think I’m going to read Tarkin next, though have already read Heir to the Jedi of course, so at least two of the first three novels to come from the new story group have been absolute triumphs.

It’s not really tempting to think of myself as some kind of dispossessed fan, though I know I have bemoaned the loss of things like the Thrawn trilogy. I’ve always tried to be open-minded about these changes, though having grown up with so many of these books, I always found it a bit difficult to let it go, I suppose.

This Easter weekend, I read a couple of stories from the now-Legends continuity, and my quandary has begun to lessen as a result. I’ve already talked about The Force Unleashed, of course; well I followed those two up with the Agent of the Empire series from comics great John Ostrander! 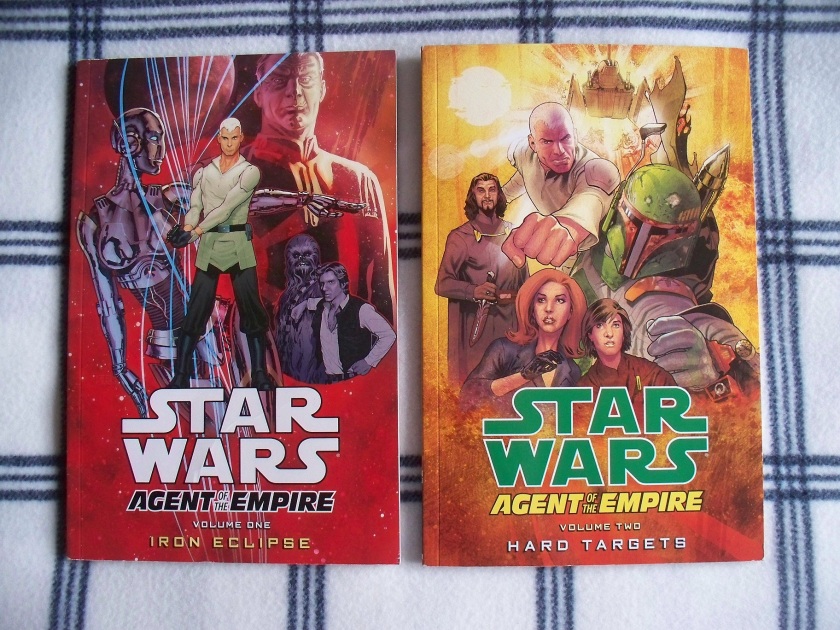 The first book began in December 2011, the sequel following in October 2012. At five issues each, they tell the adventures of Jahan Cross, the Agent of the Empire, as he works in the shadows for Imperial Intelligence. The series was sold as the Star Wars version of James Bond, and the first book in particular really shows us this, as we see Cross meet with Armand Isard (M, in this instance) and Alessi Quon (Q, if you will). I’m something of a James Bond fan, so thought these aspects were pretty hilarious, but I can see that some folks might not appreciate them.

Iron Eclipse follows Cross to the Corporate Sector, where he foils an attempt by Iaco Stark to take over the galaxy’s droids and ultimately topple the Emperor. The story is actually hilarious, though I for one appreciated the throwback to the Republic comics series, most notably the Stark Hyperspace War series. Ostrander was a long-time writer for that series of course, and it was good to see the links made that show the universe to be more cohesive. The series also features Han and Chewie in what might look like a gratuitous cameo, though it ties in nicely with Brian Daley’s novels, and ultimately I can’t really fault their presence.

The second book, Hard Targets, is another interesting one, as we see Cross working almost in a diplomatic capacity when the current Count Dooku (not Christopher Lee’s character, his nephew) is assassinated and Serenno is trying to elect a regent. There are some truly awesome parts to this story, not least looking at the inner-workings of Serenno (Count Dooku is one of my favourite Star Wars characters ever), but also the beginning of the story, on Alderaan. These comics are set before the films, so Bail Organa is alive and well. It’s always been a huge bugbear for me, but there are barely any stories that take place on Alderaan, which I have always found so frustrating as a Star Wars fan!

Jahan Cross is “the Empire’s scalpel”, and while there are plenty of stories that involve agents of the Empire – heck, Mara Jade can be seen almost as the same character – there’s something really interesting about this series that made me really eager for more. There’s a tantalizing cameo from Ysanne Isard in the second book that got me thinking about the possibility of seeing the two paired up for a mission, for instance. There is so much you could do with a character like this, it’s a shame that we’re unlikely to see anything more from him. But I guess anything’s possible.

In addition to these, I also read Dengar’s story from Tales of the Bounty Hunters. It’s an anthology I’ve mentioned before, of course, but while I consider the Zuckuss story pretty decent, and IG-88’s just hilarious, I don’t really remember that of Dengar. Well, what a surprise that was!

Dengar is the bandage-wrapped chap immediately to the right of Vader in the above picture, but because of the editing, you don’t really get to see all that much of him in the film. His backstory is that he’s a Corellian swoop bike rider who suffered a disfiguring accident during a race with Han Solo, and was “rescued” by the Empire, who turned him into an assassin without a conscience. It sounds pretty badass, and should be cool, but his story in the anthology turns into a love story as he rescues a dancing girl who turns out to be a techempath, who feels a connection with him and basically turns him human again. They wind up getting married – and Boba Fett is the best man. Seriously, I’m not making this up.

There is an annoying trend among the stories in the Tales of the Bounty Hunters to make too much of an effort to entangle Han Solo in each of the hunters’ pasts, and while Dengar is perhaps not the worst offender (Boba Fett has the most arduous story in here, and I’m not going to read it again in a hurry), it is so annoying how he’s portrayed to be out for revenge, and tries to imagine each target is Han whenever he kills them. Why can’t these bounty hunters be on the bridge with Vader because they want the money? I mean, that’s what I imagine most bounty hunters are in the profession to do, earn money. Surely the ruthless side of these hunters needs to be emphasized, and not trying to make it all tie into a neat little bow all the time?

For me, Dengar’s tale summarises a lot of how I feel about the wider expanded universe right now, I think. Sure, there are some truly stellar pieces of fiction in the Legends stable, but for the most part – particularly the Bantam era, actually – we see a lot of this sort of thing, where stories are a little weird (with the techempath stuff), have some awesome set-up (Dengar as a conscienceless assassin for the Empire) and take us to the epic locations of the original trilogy (Cloud City and Jabba’s Palace), but ultimately we get some weird little story that feels compelled to explain every nagging detail and make everything link up to everything else.

Which brings me back to what I was talking about at the beginning of this blog, really. When they’re good, the Star Wars stories I grew up with were really, really good. Increasingly, however, I find them for the most part to be fairly bland, a little too outlandish, or downright silly/annoying. Both the Jedi Academy trilogy and Darksaber spring to mind as being in this latter category, despite having been a big fan of them all those years ago. There are still a fair number of Prequel-era stories I’ve not talked about here, but love very dearly, but I think I’m getting to that point now where I can say, yeah, maybe it is time for a change. Maybe we should take what was good about the EU, remove the garbage, and make way for what could be a much more joined-up way of storytelling.

I’m definitely rambling now, so it’s probably time to finish up this blog. But suffice it to say, A New Dawn has really rocked my world, and made me think that perhaps, we could be in for an even more interesting Star Wars history than we’ve had throughout the 90s and 2000s…