Hey everybody!
It’s about time I wrapped up that look at the Dominion expansions I started back in July last year, don’t you think? It’s been on my mind, anyway, so let’s get to it – starting with some Alchemy! (If you haven’t already, make sure to read my blogs on the Base Game and first Expansions!) 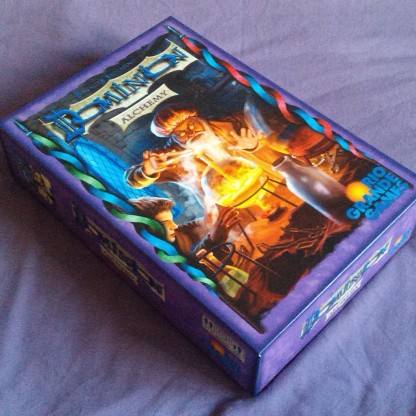 Alchemy was the first small-box expansion for the game back in 2010, and introduces a new resource to the game: Potions. Potions cost 4 gold, and come into play when you’re looking to buy some of the particularly powerful cards that form a strategy of top-deck manipulation. There’s also the new victory card Vineyard, which is worth VPs for each 3 action cards in your deck at game end, which can be particularly good for rewarding you for getting cards you need to play the game anyway. However, you don’t want to go buying up all the Potions cards as you would the big money cards, as you still need the gold to make them work for you. It’s an interesting expansion, though probably not one you want to mix in with other expansions.

Hinterlands is another interesting expansion, though a curious one, at that. I once read a review that called it “the Dominion players’ expansion”, which fits quite well, really. There is a broad theme of orientalism in the box, though in terms of mechanics, it’s just filled with interesting cards that bring about some interesting gameplay decisions. There’s no over-arching strategy to speak of, you just get more of the same but in a sort of niche way – it’s the sort of expansion you’ll want if you already own several expansions, but not if you’re looking to get your first. Ironically, Hinterlands was actually my first expansion for the game, bought primarily because I was interested in that orient flavour. 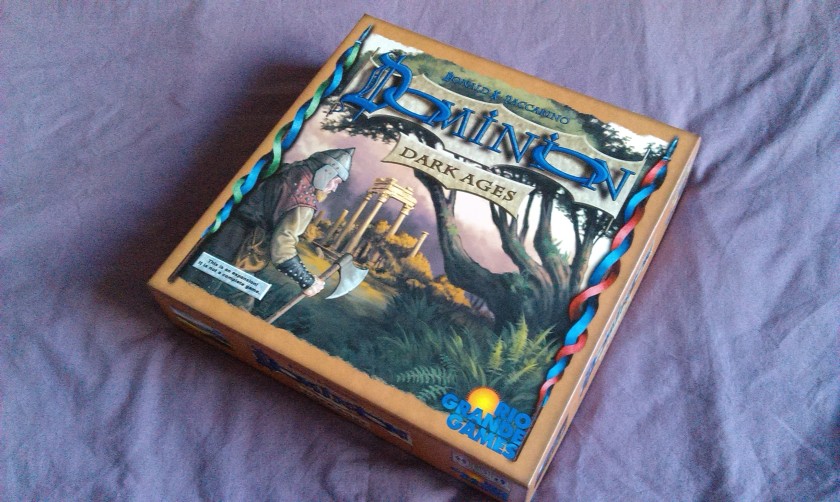 Dark Ages is something of a behemoth expansion. The most card-heavy non-base-game product in the line, it has 500 cards for you to enjoy whole new ways of playing the game. Let’s take a look…

Dark Ages professes to be all about the trash, and all about the upgrade. Rather than Estates, players start with the Shelter cards in their hand, which provide you with bonuses when you trash them, allowing you to do stuff right off the bat. There are two cards that allow you to gain new cards when trashed, Urchin (to gain a Mercenary), and Hermit (to gain a Madman). These new cards can be quite powerful, but won’t stay with you for long. There are also Rats cards that can overrun your hand, which I find quite thematic! 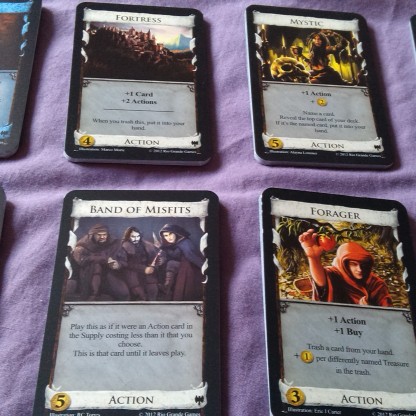 A lot of the cards in Dark Ages have a sort of dingy, “used-up” feel to them. In a sense, this is the antithesis of Prosperity, where everything is new and shiny and expensive. It’s quite a nice feeling, in a weird kinda way! This is nowhere more plainly seen than in the Ruins cards – five sets of ten different cards that evoke earlier versions, such as Ruined Market or Ruined Library. These cards have a 0 cost but are generally not as good as other cards on offer. But at least they will allow you to get something you can later use if you’re running short of money. Continuing the theme of trash-interaction, there are cards that directly work off the trash pile, including the Rogue, which actually allows you to take a card from there. Some very interesting concepts and ideas available here, anyway! I actually found it took some getting used to this one, and would probably recommend playing some of the others first. 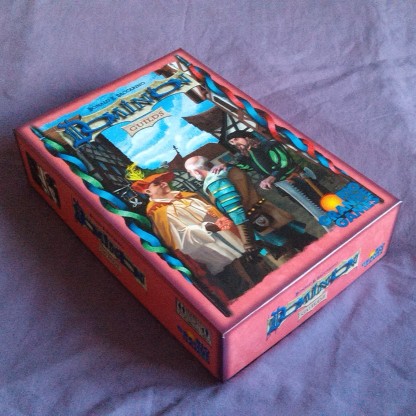 Finally, we have Guilds. Released back in 2013, at the time this was said to be the final expansion to the Dominion game line. It’s another that comes with metal coin tokens (shiny!), and features a new mechanic around overpaying for stuff. The coin tokens are therefore used to facilitate overpaying to gain maximum effect without spamming your deck with gold cards. A lot of positivity came out of this box, largely due to the theme of overpaying and such. Because you will likely go through the game gaining a lot of gold, it’s also one that combos well with Prosperity and all those big money shenanigans. A wonderful addition, at any rate!

As a postscript, let’s talk briefly about the new Adventures game that came out earlier this year. Some new card types come in the shape of Event cards, which grant an effect when purchased, and Reserve cards, which can be set aside for when you need it most. Duration cards make a return (originally introduced in Seaside), and there is a Traveler card that can be upgraded much like Dark Age’s Urchin/Mercenary or Hermit/Madman combo. It sounds like another solid expansion, at any rate, though I haven’t bought it so don’t know how it actually plays.

But there you have it! The full trawl through the game line of Dominion. I must admit to feeling fairly tired of the game these days, as I find myself sticking to the more thematic deck-building games such as DC or Marvel Legendary. I’ve had some fun with Dominion, don’t get me wrong – it can be really awesome when you set up a mega-combo that lets you buy half a dozen cards and draw most of your deck, for instance. But ultimately, it’s still just down to basic mechanics, without much in terms of theme coming through. You buy cards for their in-game effects, and nothing else, so it can be quite mechanical. Sure, some cards will have that flavour about them – Market forever springs to my mind – but I don’t feel it in the same way as I do with other games.

Dominion should definitely be tried at least once by any serious gamer, even if you’re already familiar with other deck-building games (indeed, particularly if you are familiar with them). However, I’d definitely advise caution before you drop a ton of money buying the expansions all at once, as I did…

2 thoughts on “Alchemy in the Hinterlands”