It’s week 10 already! Doesn’t seem like five minutes since I started work on this project! It’s been another slow week, largely because I’ve got an essay due for the OU degree I’m doing, and have been concerned about the quality of that. My essay troubles notwithstanding, I have managed to devote enough time to the painting here to actually get some fairly decent progress in on the Deathwing stuff! However, as prophesied last week, I haven’t managed to actually finish anything! 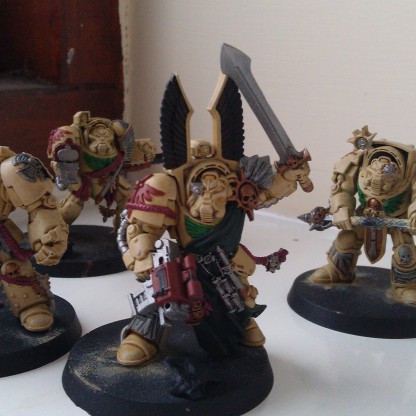 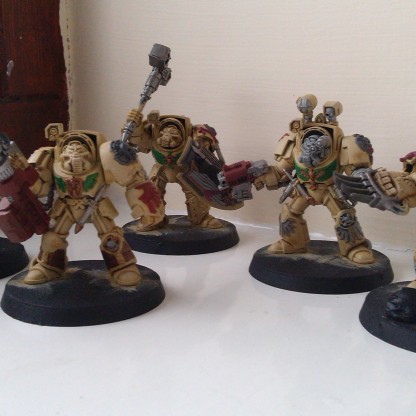 The aquilas, crux terminati and all the red bits (chapter icons and gun casings) have now been done, and since taking the above pictures, I’ve also managed to do the purity seals, so there are only the odd bits left to do now, really! Then it’ll be a case of basing these guys, and then I’ll have the first ten done! Not to mention, some bits left on the dreadnought, too! 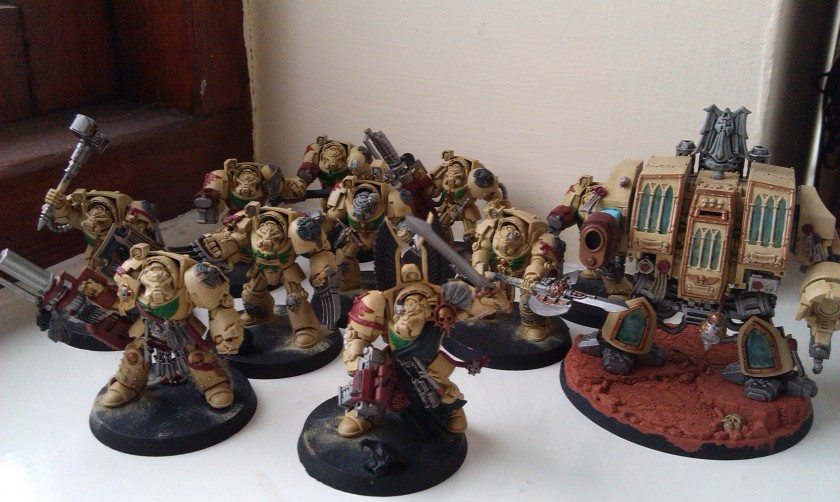 It’s been a really tough slog, then, but I’m really pleased with the results, I must say. I have five Deathwing Knights (and Belial) built up and primed, so I guess they’ll be next on the list, but I also want to build up five more terminators to get things like the standard bearer and stuff. I have a land raider and drop pod waiting in the wings, then I’ll probably call my Deathwing army done! Then it’s back to the Ultramarines. And the Necrons. And the Stormcast Eternals.

Don’t get me wrong, I love seeing these models coming together like this. I just feel like I might have way too much on my plate right now! Aside from the Deathwatch game, I’ve not bought any models for a number of weeks now, which I’ve been seeing as an improvement, though these new Dracoth Riders have really interested me, so I’ll be picking up a set next weekend, obviously. Hopefully once all the essays are out of the way, I can get stuff finished much quicker, anyway!

As it’s week ten, I thought it’d be interesting to see how far I’ve come since the first instance of these blogs…

This was the first group shot of model progress, and I’m pleased to say that at least one of those models is now actually finished! The Knight-Vexillor has been done and is in my Stormcast case with his compatriots. The two Deathwing chaps at the back there are very much on the way to completion, and both the chaplain and razorback have seen some decent progress, as well! So not too shabby – I just wish more models had been finished!!

Everything is going in the right direction, though, so can’t complain too much!