Hey everybody!
In a move that will surprise absolutely nobody, I picked up a copy of the new boardgame from Games Workshop at the weekend, Deathwatch: Overkill. I was actually concerned about dropping so much money on another box of plastic, but my local games shop was selling it for £20 less than GW, so I decided to take advantage and go from there!

Oh yeah, and I made a video of the unboxing, just because why not!

I bought it on Sunday afternoon, and was at work all day yesterday, but all of that notwithstanding, it should also surprise nobody that I haven’t actually built any of the models yet, so haven’t played the game yet! This blog is therefore going to be a little piece that will look at my very first thoughts upon opening the contents and flicking through the rules a bit.

First off, let’s talk minis. You know you’re here primarily for the little plastic men, after all!

My first impressions are, they’re beautiful. On the sprue, it’s obviously difficult to work out what they’ll look like, but the individual pieces are so intricate and beautiful to see, you just know they’re going to create stunning (and, in the case of the Space Marines, centrepiece) models. The way each model goes together does look a bit weird. The Marines in particular seem to share the assembly with the Stormcast Eternals from the Age of Sigmar starter set, in that they go together in a surprising way, and unfortunately, they do seem to be very much one-pose models. Glancing through the assembly instructions, there doesn’t seem to be anything particularly weird, such as that Liberator-prime or anything, but they do look moulded to specifically prevent any kind of articulation.

The Genestealers are very similar, with arms that connect to pegs that force a certain look to the models, which obviously suggests a bit of a mass-market appeal, making it as straightforward as possible to put together. Experienced modelers who are used to putting together Space Marines in 10+ pieces will no doubt throw this lot together in a breeze (even the White Scar on his bike, with the bird floating above, is only in ten pieces). Indeed, in looking through the book to write this up, I’ve been tempted to start clipping a couple out – don’t be surprised if next week’s Hobby Progress blog features one of these guys, then!

But overall, the miniatures are truly excellent. I am a big Deathwatch fan, and I hope that this game does indeed become a precursor for at least a couple of plastic kits from Games Workshop in the future, more along the lines of the Space Marine Tactical Squad, or whatever. Time will tell!

What else is in the box, then?

It’s a boardgame, so it won’t be a shock to learn there are board pieces included – eight of them, in fact, and double-sided, too. They have that 3D effect going on, much like Space Hulk has, in fact. There aren’t any tokens like in previous games, it’s just eight boards, and that’s that. Two decks of cards provide all of the details for the Deathwatch and the three main Genestealers (Patriarch, Magos and Primus), and a separate deck of Broodmind cards that are used by the Genestealer player to do Genestealer things. You also get the book with all of the rules, a nice bit of fluff, an ‘Eavy Metal spread effectively telling you how you could paint them all, and nine missions to play through. You also get some dice and a range ruler thing.

Each model has a move characteristic, which lets them move that number of zones on the board. The boards are divided up with black lines on the terrain, and models can be placed in each if there is room. There are rules for running, jumping and moving through enemy territory, and the rulebook is really pretty clear how this all works, which is commendable! 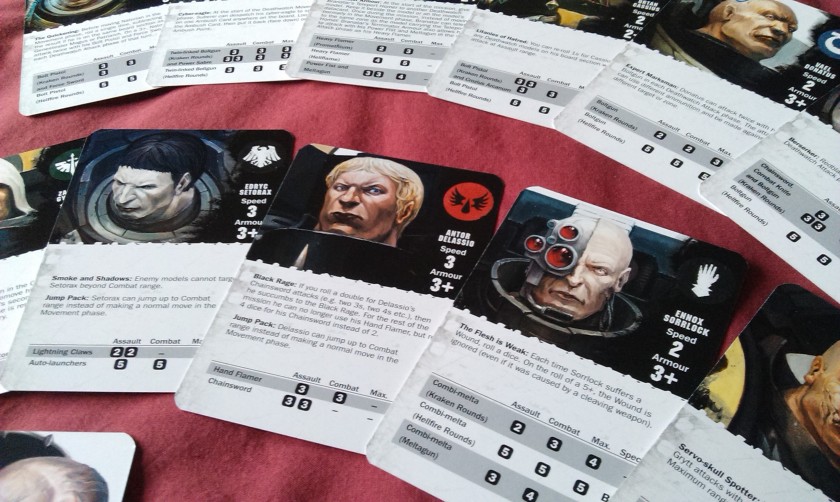 Attacking is also fairly straightforward. Each model has a weapon profile(s) that show the number of dice to roll, and the number required to equal or exceed in order to score a hit, at each of three ranges: assault, combat and maximum. Models with armour get to roll a d6 and see if they make the save before determining wounds – for each member of the Deathwatch, and the three Genestealers with cards, those cards are flipped over when they have received a wound, which lowers some of their skill level for the remainder of the game. The regular Genestealer Cult members are just removed from the board after a single wound, to return again in later ambushes! The Deathwatch Marines are allowed to forego an attack in order to heal, flipping their card back to the unwounded side, adding an extra level of strategy I suppose. There are also rules for blast, rend and cleave attacks, which look nice and straightforward to use.

And finally, the missions!

The missions are a nice mix of prescribed route of play, specifying the number of Deathwatch Marines in play and the objectives, with board maps and details of where the Genestealer player can ambush. There are also rules that detail bonuses if you play through them all in a campaign. The types of mission vary, with one being a sort of all-out assault, one a recover-the-artifact, etc. They look a nice bunch, anyway, but as always with such things, I’m concerned that they may lead to a short shelf-life. I was surprised, in fact, that White Dwarf didn’t have any kind of bonus/exclusive mission over the last couple of weeks, though they’ve been more concerned with putting out the rules to field these models in Warhammer 40k games, so I suppose that’s understandable. Plus, I might be worrying over nothing, as while there are only 9 missions included here, most only allow for 4 Deathwatch Marines, but there are 11 of them in the box, so the permutations for play are significantly more than it first seems.

Overall, the game looks great. I realise this blog was meant to be a first impressions, and I had anticipated not having a great deal to say about it, but I’ve gotten so enthused for the game, I have waffled quite a bit! I’m biased because I’m already such a huge fan of the Deathwatch, of course, but I’d say this is the first board game from GW that I have actually wanted to put together and play right away, without worrying about painting first, or any of that stuff. The rules seem to be simple enough to allow for very easy entry, but the game overall is immersive enough that it makes you think a little more about what you need to do to win.

I hope Games Workshop will put out some multi-part Deathwatch models that will allow for more customisation of your deployment, and perhaps provide some pdf cards with generic troopers to use (though I don’t think it would be too difficult to whittle up some anyway). All the way through the rumours of this game coming out, I wasn’t the biggest fan of the Genestealer Cult idea, perhaps from hearing the stories of the original 90s incarnation, but I have to say, I am intrigued now that I’ve had a chance to see the sprues and digest the look etc. So I wouldn’t be averse to seeing them bring out a kit or two with more of those guys, also! Of course, there are rumours of codices coming out to support both factions, though part of me thinks that may well be wishful thinking. I guess time will tell!

As I’ve said, though, it looks like a fantastic game, one that I don’t have the least bit of remorse over buying. Maybe some of these models will be assembled and painted sooner rather than later…?