Hey everybody!
It’s time for another game day blog here on spalanz.com, and I thought I’d go for something a little bit different today, in rambling a bit about a deck I’ve been playing in Magic the Gathering of late. It’s always good to ramble, of course, and I’ve been playing a lot of Magic again lately, so it all seems entirely appropriate! So without further ado, I’d like to welcome you to House Dimir! 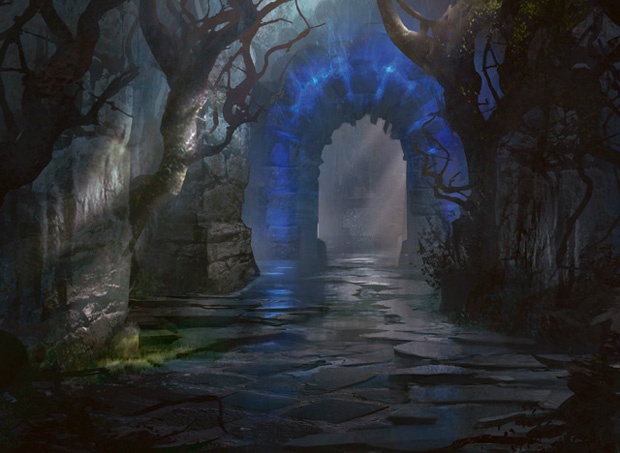 Enter and become a mastermind of spies, lies and deception.

House Dimir is one of the ten guilds on the plane of Ravnica, and was first introduced in the original Ravnica block (2005-6). This block introduced a number of new mechanics as per usual for Magic releases, centred around the lore of the ten guilds of the plane. Each guild is represented by a colour pair, and contained themes that built up the lore of Ravnica – for example, the Boros Legion (red/white) focused on massed-army play with card effects that affect all of your guys; the Cult of Rakdos (black/red) featured the maniacal, almost-suicidal attempts to just go all-out, and House Dimir (blue/black) was all about the secrets and deception.

I like to experiment with different decks and combos, and while I do tend to return to either black/red or black/white decks, I do like to see what’s on offer from the other colour combinations. However, I dislike a lot of the blue cards that basically shut down gameplay and don’t let anyone do anything, so have often stayed away from the colour. However, during the last Standard season, I built up a Jeskai deck with red/white/blue (which will probably feature in a future blog!) and have begun to re-evaluate some of the former thoughts on blue cards.

And thus, my House Dimir deck was born!

I love pretty much everything about Ravnica. Tarkir block is still probably my all-time favourite, not least because it was the current block when I started to play, but I do love the guilds and the theme from that. I’ve played a lot of Rakdos decks, and have dabbled with some Selesnya, as well as trying to build an Orzhov deck off-and-on.

There have been two mechanics specific to each guild, one each from original Ravnica and Return to Ravnica blocks. For Dimir, the original mechanic was Transmute, which allowed you to discard a card from your hand, pay its Transmute cost, and search your library for a card with equal mana cost and draw it. I don’t currently have any cards from the original block, however the deck I’ve built includes more than merely Dimir-specific cards, and I have one copy of Disciple of Deceit in there that has the same effect that triggers whenever it untaps. It’s really cool to me to see how effects like these can survive from set to set, and really help to build up the strategy even when you look beyond the block.

The second Dimir mechanic is called Cipher, which I feel is really awesome, and was probably the prime motivation for wanting to write this blog! Basically, when you play a card with Cipher, you exile the card once it has resolved, ‘encoded on a creature you control’. This almost acts like an enchantment on the creature, and allows you to continually re-cast it from exile whenever that creature deals combat damage to a player, so long as the card remains in exile. I really liked this ability, so long as I was getting the damage through directly rather than being blocked, and can imagine it would be wonderful to have a whole army of people attacking and dealing damage, then all kinds of other stuff triggering off!

Of all the Cipher cards I have in the deck, Shadow Slice has got to be my favourite – ‘target opponent loses 3 life’. Encode it on something to get that triggering with every attack? Hell yeah! Of course, some of these cards are expensive to play, and Shadow Slice costs 5 mana, however blue/black can be pretty great for longer games, and while I’m still unfamiliar with the colour blue, I’ve made sure to get a few defenders and cancel spells in there to make sure I can last that long!

I also have a lot of other stuff in the deck from Theros and Tarkir blocks, including the wonderful Silumgar cards, with which I’d tried to do something towards the end of last year, but couldn’t work out a good deck so gave up with them. While I haven’t actually gotten to play with him yet, I also have the Theros god Phenax in the deck, as I’ve recently gotten into the Theros cards and what they all do. Pretty much all the Magic I play these days is casual, so while it might not be Standard-legal, and would likely get ripped apart in Modern or Legacy, I still really like it. In about 6-8 games I’ve played with it so far, I’ve only lost once due to mana-screw, which is another reason for enjoying it! I’ve recently picked up some more thematic cards, including some of the Dimir legendary creatures, so might be changing it up for now, but here’s my deck for your general amusement!