Hey everybody!
After last week’s hiatus, Game Day is back, with a look at another of my favourite games from my personal collection. Today is actually a first for me, as this will be the third Game Day blog to feature this particular game – we’re taking a look at Warhammer 40k: Conquest!

This game was released late in 2014 almost as a replacement for the cancelled Warhammer: Invasion, set in the Old World of Warhammer Fantasy. While I was initially a little sceptical, being a long-time fan of the fantasy game, I was definitely in love with the game following my first play-through. Unfortunately, this first game had been looking like it would be my only game, until I finally dusted off a deck to try at my local game store, following the announcement of a tournament there next month. Now, I’m not a tournament player, as last year’s Netrunner event showed, however I can’t resist the opportunity to get in a lot of games, even if it means going against my nature!

So last week I was able to get in a couple of games, once with a pre-constructed Space Marine deck that featured a lot of the Space Wolves cards from the first cycle, and another with a deck I’d built up in the hope of one day getting a game in. I have to say, my first (second?) impressions are unchanged from 2014 – indeed, if anything, I’m even more in love with this game than I was then!

But what makes this game so much fun?

The game has a strong similarity to Call of Cthulhu insofar as you’re fighting over a number of cards that are arrayed across the table between the players. The game also has a lot of similarities to other LCGs from Fantasy Flight, but this is something that I really like about them – there’s a sense of familiarity that allows you to move easily between games. Overall, each is very different, but there are a few bits that feel nice to have that kind of consistency, almost. But I digress!

It’s also incredibly strategic, more than I thought it might be, as you have to decide where you’re going to commit your Warlord, whether you want to commit to a planet to gain the command advantage, and thus risk your opponent winning the first planet – there is a lot to think about. 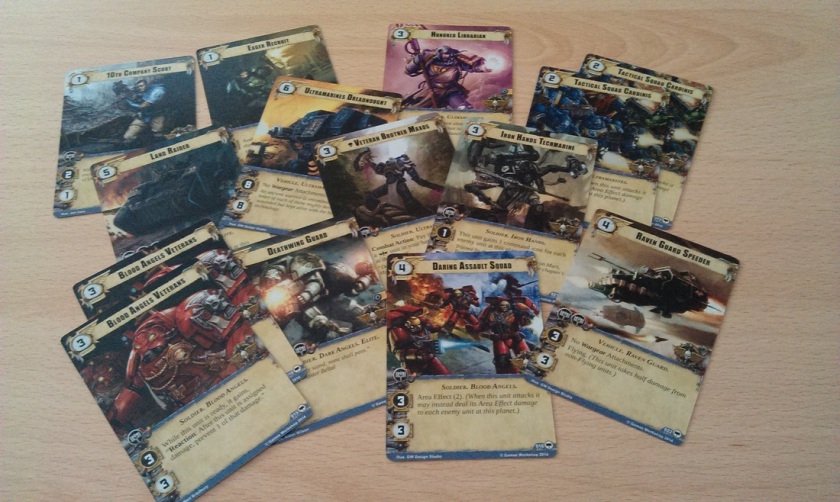 All of my games have been as Space Marines, so I can’t really speak for the other factions yet, but there is a really clear mechanic here of using some really heavy-hitters to just go all-out, along with some really cool ways to gain resources to enable you get even heavier-hitters out. Playing against Astra Militarum, it was interesting to see how that army appears to have a lot of ability to reduce the costs of troops and create synergies to bolster the ranks, too.

The sense of the tabletop game is most assuredly there, not merely because of the strong flavour and similarity with unit-names and whatnot. It does feel like a very tactical game as you decide where to deploy your units, and out-guess where your opponent will deploy his Warlord.

It also allows for some really exceptional thematic experiences. I lost both of the games I’ve played lately, firstly because I was a bit too cavalier with my Warlord, and secondly because I didn’t think long-term enough. In the first instance, my Warlord was bloodied and battered, and then kicked down by some Snotling tokens. In the second, my Warlord was bloodied (and so, forced to retreat) once again by Snotlings – during the second game, it became a running joke therefore how Cato Sicarius was afraid of the Snotlings and as soon as they appeared, his days were numbered, etc.

This is fast becoming a firm favourite for me, and I’m looking at putting another deck together, either Eldar or Chaos (well, maybe I’ll put two more together!) It’s a really fun game, with a lot of depth and stuff to think about, and one that I’m looking forward to a lot more games!