Five weeks already… how the time flies! I’ve been really ill lately, however there’s still been a surprising amount of progress made, so let’s jump right in! 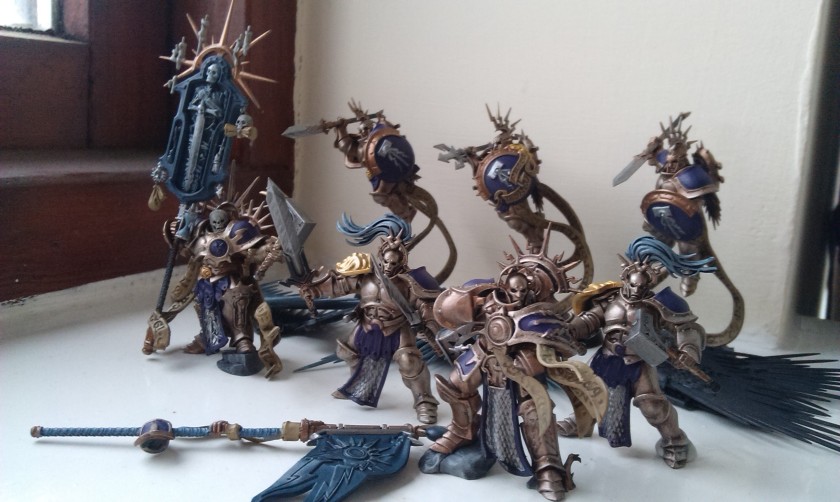 First of all, following the very exciting Age of Sigmar game last Wednesday, I’ve put all of the recent, 40k-related projects to one side as I make an effort to get a lot of units finished with which I can game. So even though the Dreadnought was close to completion, it has been moved to one side for the moment. Instead, I’ve been working on a number of models, including three Prosecutors and the Lord-Relictor that were started back in September last year, but have been floundering ever since…

I’m actually thinking the Lord-Relictor might be finished now. It actually took me a long time to even consider putting him together, as I wasn’t initially that keen on the model, however I assembled him and painted most of the armour and icon, before hitting my slump towards the end of September. Considering the icon itself has been painted really simply, with just a drybrush of Stegadon Scale Green over the bones, I think it looks really great. I’ve decided not to pick out all of the bones on the armour, as I still think they look silly, but instead have kept them the same colour, suggesting instead that they have been moulded into the plate. That way seems better to me, anyway!

The Knight-Vexillor also plods along towards completion. Another model that I’m thinking might be finished, I’m still not sure what to do with the pennant, so have settled for a drybrush of Celestra grey over the comet-symbol and leaving it be. The two Liberator-Primes in the photo above were built up following the game last week, as I discovered I needed one extra model for the unit with paired hammers, having built up the previous two boxes as 4 with hammers and 6 with swords. So I’ve made the pair of Primes to lead each, and have surprised myself by getting them pretty much completed in this short space of time!

The Prosecutors have been something of a bane for me lately. They were built up pretty much on release weekend, and the golden armour painted, washed and drybrushed fairly quickly. However, once the trailing parchments were painted, I pretty much abandoned them as they were for the rest of the year. I really don’t understand it, because the Prosecutor model is actually my favourite of the entire Stormcast line, and these with the javelins have particularly impressed me! But there we have it. At any rate, having painted up the Knight-Vexillor over the last few weeks, and then doing the two Liberator-Primes, I had seven models that were all at roughly the same stage, and once I’d started to paint the purple pauldrons of the models, they really started to come together.

Remember these #Prosecutors from September? Hoping to finally get them finished this weekend, along with a few other projects that have been hanging around for entirely too long! #Warhammer #AgeOfSigmar #Liberators #KnightVexillor #StormcastEternals #miniatures #painting

Despite this, the Prosecutors remain one of the most difficult models, for me, to paint. All because of the wings. They have that golden trim along the top that requires so much care and attention once the wing itself has been painted, it took me about an hour and a half last night to just do one set. I was hoping to get all seven models finished this weekend, but that isn’t looking likely now, unfortunately. Still, there’s always next week! 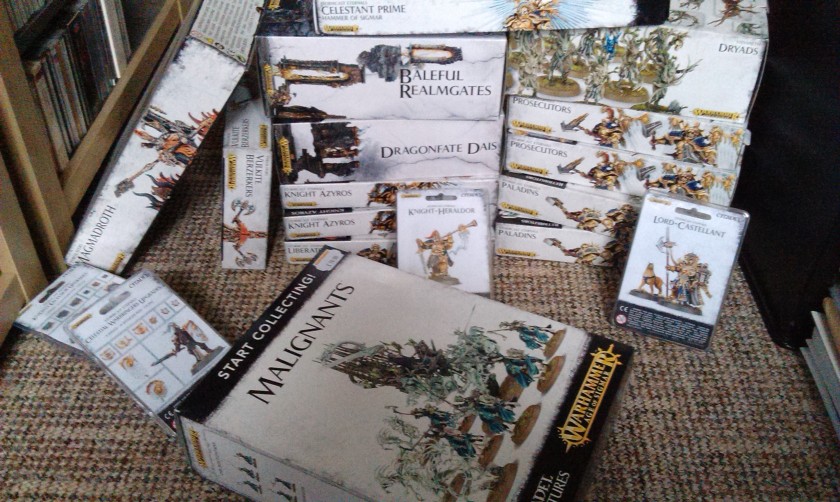 No matter how many models remain unbuilt in boxes, there’s always room to add more to the collection, I find! I bought this bad boy this afternoon, inspired in part after reading parts from The Balance of Power on Friday night. When the End Times began in 2014, I always fancied getting an army of these chaps, even going so far as buying the new models as they came out. However, I sold all but the Spirit Hosts, who I’d painted on release weekend because I couldn’t get them back in the box after taking a look at them. I really want to get the Neferata model, however I’m still trying to be (somewhat) responsible, and thus only got the start collecting box to get me going. Whether they merely form allies for my Stormcast – as in the book – or a whole new army, I don’t yet know. But I’m really excited to get going with that Mortis Engine, if nothing else!

In preparation for the awesome, I’ve also re-based the Spirit Hosts on round bases. Despite a small mishap with one, they came off pretty well, and already look great! Can’t wait to add some more soon!