Hey everybody!
Things have gotten very exciting today, with the first look at the new faction for Age of Sigmar: Fyreslayers! Essentially the same as the Dwarf Slayers from the original Warhammer Fantasy line, I thought these models looked a little bit silly when the spoilers were being leaked last week, but having now read through this week’s White Dwarf, I think I’m coming round to the idea.

Of all the changes that were made to the Old World when Age of Sigmar was launched back last summer, it seems the Slayers have survived almost intact. New sculpts they may be, but they’re still basically near-naked, muscly little men with big beards and mohawks. It’s an iconic look, and while a lot has been said of Games Workshop wishing to branch away from their 80s look into something much more unique, I nevertheless like the fact that we’ve still got this style of dwarf in the game.

So there are three new kits on pre-order this week: Vulkite Berzerkers, Hearthguard Berzerkers, and  the Auric Runemaster. The first of these appears to be something of a generic troop-choice style of kit, with ten miniatures that can be assembled with a choice of three different weapons options. Reminds me a little of the Liberators kit. They do look a little silly with their twin axes, leaping into battle, but again, it’s an iconic image that I feel Age of Sigmar is all the better for having. One of the weapons options is for a throwing-shield and war pick, which seems like a hilarious combination! I was initially hesitant about getting more models, but after reflecting, I think these could be a lot of fun to do, despite my lack of experience in painting skin, so I’m considering getting a box and kitting them out with that combo.

The Hearthguard appears more like an elite choice, with two distinct ways to build them – either with axes that trail some kind of magical, flaming flail (the Hearthguard Berzerkers), or with some kind of dragon-headed bazooka (Auric Hearthguard). I’m not yet convinced to get this kit, though the latter option does hold some appeal for me. As for the Runemaster, well he looks fine, but again, I don’t really feel all that enamoured of paying £18 for a character model.

Something that feels really exciting is that this week’s White Dwarf features a foldout panorama of the entire Fireslayer range. We still don’t know what gloriously silly names some of these chaps will have, but it’s kinda cool to see everything at once like this. Makes me wonder if the Battletome will be out sooner rather than later, as happened with the Stormcast Eternals. So in addition to all of these axe-wielding chaps, there’s also some kind of standard bearer, and of course the Chinese Dragon-style creatures. Maybe more – it’s difficult to distinguish new kits from alternate builds en masse like this. For the record, I’m almost certainly buying one of those dragon-type monsters!

Seeing all of these chaps has gotten me thinking, this more than any other time really, just how exciting the Age of Sigmar universe actually is. It’s a criticism I see leveled at the setting more and more by embittered 8th-edition players and fans, who are clearly sad to have seen the Old World end as it did, and see nothing of the richness in the new setting. Obvious rebuttals about the years that the previous iteration of Warhammer had to bed-in aside, it’s actually incredibly untrue. Sure, on the face of it, the idea of warrior souls being magically transferred into metal suits to go fight for Sigmar by using magical gates to move between worlds can seem a little goofy and all the rest of it, and if you’re not prepared to look any further then it’s no wonder you don’t see that depth. But the ‘New Old World’ still has a lot of depth and vibrancy to it, and as we see this new incarnation of Dwarf Slayers added to the world, a whole load of mythology is added on to provide that. Agreed, most of this mythology is pretty much grafted from the “world-that-was”, but it opens up so many more worlds and avenues for exploration that I am utterly confounded to see dismissed as often as it is.

I’m going to stop this rant before it becomes something else, anyway!

Suffice it to say, there’s some interesting new stuff on the way next week, and for a few weeks hence as well, it seems! 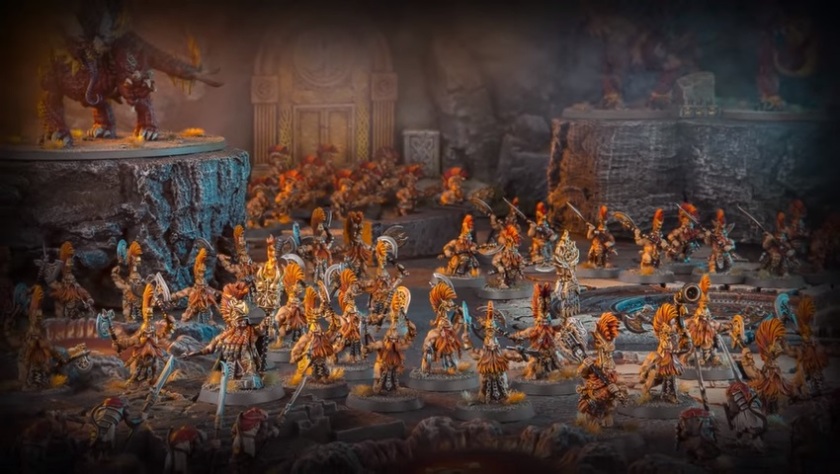