Hey everybody!
It’s Tuesday, it’s game day, and it’s time for another blog featuring my favourite card game, Lord of the Rings LCG! It’s time to head south, and hang out with the men of Gondor!

The deluxe expansion Heirs of Númenor was released at Christmas 2012, and took the game in a substantially different direction with several new mechanics, but more noticeable for me was the overall feel of the game. After a cycle of wandering through the caverns of Moria, emerging onto the streets of Minas Tirith felt like a completely new experience!

As usual, I won’t go massively into the player cards with this look through one of my favourite years for the game, but a short overview is nevertheless called for. The deluxe expansion gave us a new Boromir hero in leadership, another of the tribal heroes who provide buffs for allies in a similar manner for Daín Ironfoot from Return to Mirkwood. Boromir’s ability to increase the attack value of Gondor allies helps a lot with the new mechanics introduced in the box, as we’ll see. A lot of Gondor and Ranger allies brought a lot more to this synergy, also, which helped to get the deck archetype off to a decent enough start, though it still lacks something when compared with the amazing feel of a dwarf deck.

The first scenario is a lot of fun, as we are tasked with delivering the scroll of Alcaron to Faramir, running the gauntlet of enemies who want to steal it from us. Lord Alcaron is a new character to the mythos, and one who becomes increasingly important in the cycle that follows the box. The scroll is an objective card, and when a hero with the scroll is damaged by an enemy attack, the scroll passes to that enemy. To recover it, you need to both defeat the enemy then exhaust another ally to claim the card once more. This can lead to a lot of thematic play as the scroll is passed around between enemies and heroes as in some kind of comedy fight scene. However, there isn’t really any benefit to keeping the scroll with you until the very final stage, where you need to both progress through and have the scroll attached to win. Enemies with the scroll don’t run off or anything, so you can easily just leave it in the staging area as you fight through the quest.

Which brings me onto the first big point about this box: different ways to quest! Normally in a game of Lord of the Rings LCG, you quest with willpower, fight with attack, and defend with defense. However, Heirs of Númenor brought two new keywords to the game, Battle and Siege, which force you to quest with attack and defense values, respectively. This was huge back in the day, as it made formerly redundant deck types much more viable. Mono tactics, anyone? In enemy-heavy scenarios, however, this can make for some difficult choices, as you need to keep some heroes for questing and some for attacking. It really spiced the game up, for me. 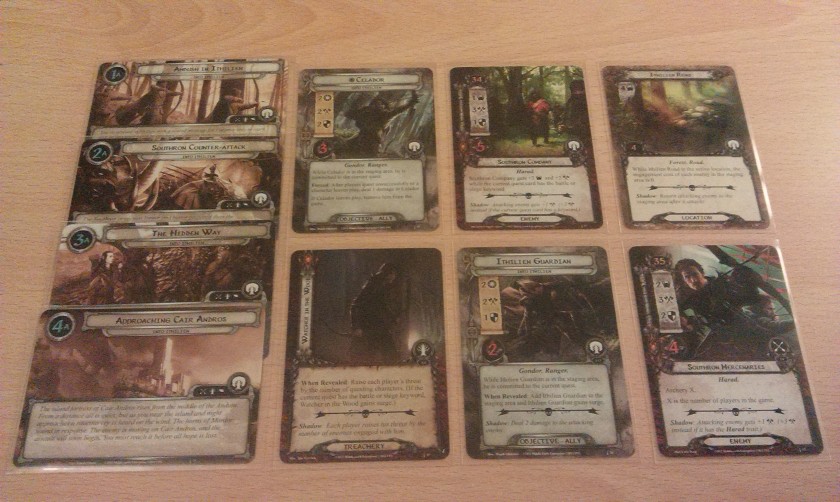 Still a fairly controversial scenario, Into Ithilien continues the story as we attempt to track down Faramir to deliver the scroll. Instead, we meet with the ranger Celador, who leads us through the forest as we encounter a Southron attack! Southrons are one of my favourite things of all time about Lord of the Rings, partially because I came to the story really through the movies, and the Southrons have an irresistibly exotic look to them. The scenario is controversial largely because of its ascribed difficulty rating of 4, while being a much more difficult scenario to cope with in multiplayer. Only ever playing solo, of course, I find it a fair-to-middling game, but still. There are a number of threats that can really end your day, and the amount of non-easy encounter cards can really amount to a horrible quest!

What I find interesting about this more than anything, however, is the different ways in which you can complete the quest. If you complete stage 1B with Celador in the staging area, you can skip straight to stage 3. However, every time you quest unsuccessfully, Celador receives a wound, and with only 3 health, this isn’t good! Progressing to stage 3 can be really useful as enemies aren’t engaged – the idea being, the rangers take you on a hidden route. This isn’t all great of course, as you still need to quest really well, otherwise you can threat out with this inability to engage enemies. However, if Celador didn’t make it, you have a shorter stage 2 before progressing straight to stage 4. Now, stage 2 introduces us to Archery, which deals an amount of direct damage to your fellowship at the beginning of each combat stage, so you’ll want to breeze through as quickly as possible.

Stage 4 has a similar feel to that of Massing at Osgiliath, as you try to race across the open to your final destination. Depending on how you look at things, it also features a handicap in having the Siege keyword if your threat is 37 or higher, which is entirely possible if you took stage 3 rather than stage 2. There are definitely some interesting choices to make on this one, and while a lot of people dislike it, I think it has a certain something that keeps me interested!

The Siege of Cair Andros 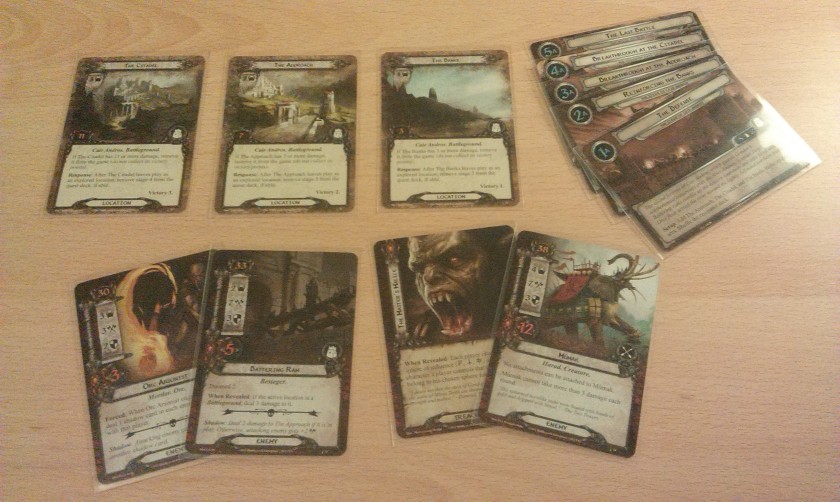 This is a really interesting quest. Perhaps the culmination of the siege and battle keyword ideas, we have a huge set-piece battle at the entry to Cair Andros. What’s interesting here again is the way you can bypass the quests if you manage to travel to the three battleground locations. Of course, this involves some careful questing – questing that I’ve not managed to complete yet!

The encounter deck is full of enemies and treacheries, with only two location cards. Otherwise, you only have the three battleground locations, which have low threat values but really high quest values. I like how these values are distributed so as to almost force you into a prescribed path that feels like a real quest. This is a really difficult, combat-heavy quest, but it’s also exceptionally thematic when you play it right, and despite being so difficult, remains one of my favourites for the theme that comes out.

Which is really what I like about this expansion overall, really. Something that I really enjoy about the Lord of the Rings LCG is just how narrative and thematic it can be, and while there can often be really tough quests that frustrate me, and make me want to just walk away, I love how the designers keep coming up with interesting and thematic new rules.

Heirs of Númenor is a great box, and really sets the narrative tone for the game to come. By the time it arrived, the first Hobbit saga expansion had been released, perhaps inspiring the designers to really embrace the epic storytelling of Professor Tolkien. While there have always been some narrative aspect to the first two cycles, here we see that become a much more important to the game from here on. Instead of vague plot elements, we have ongoing threads with the results of each adventure pack impacting on those of the next. The story of Heirs of Númenor only starts the real epic of the Against the Shadow cycle, but that’s a subject for another day…

One thought on “Heirs of Numenor”