As the night draws in, I thought it’d be fun to take a look at a great little trilogy from one of my favourite genre writers, Graham McNeill – it’s the Dark Waters trilogy!

Released from Fantasy Flight Games between 2011 and 2014, the trilogy takes place in the Arkham Horror universe, and features characters from that game as well as introducing a new, central character Oliver Grayson, a professor at Miskatonic University. The series follows him on the trail of a mystery that starts with the disappearance of some female students on campus, and uncovers a plot to destroy the world.

As a tie-in, the novel has a lot of ground that it sometimes feels like it needs to cover, however it actually turns out to be a really great story. The first novel actually features a sequence that is strongly reminiscent of the actual Arkham Horror gameplay mechanics! Certainly appeals for fans of the game. Something else that appeals to the gamers is the opportunity to get game extras by sending off a coupon in the back of the novel – the first two books, at least, had this, where you could get cards for both Arkham Horror and Elder Sign: 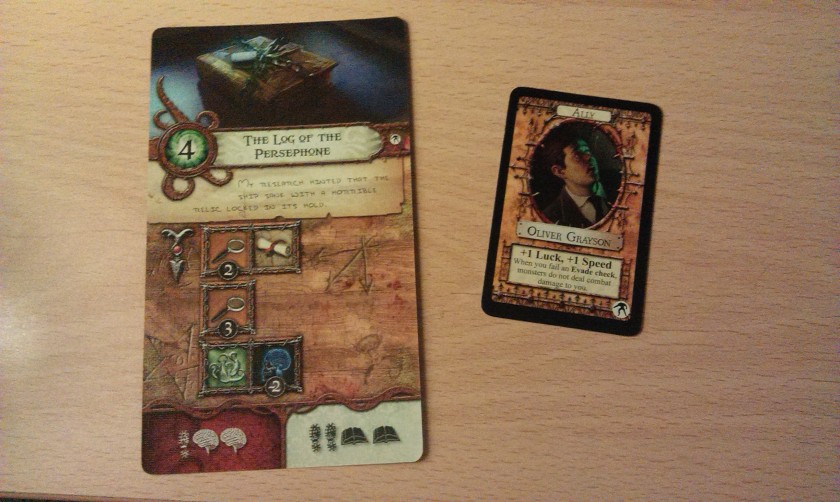 A nice touch, I thought, and well worth getting if you enjoyed the books. Which leads to a weird kind of cyclical argument for recommending these things. Most of the people who bought these books, I gather, did so for the cards on offer, without reading them. However, I’d say that you’d get more out of seeing these things come up in-game if you’ve read the books.

The books are a great adventure romp set in the world of Arkham Horror, a bit like a cross between Indiana Jones and Buffy the Vampire Slayer (specifically Reptile Boy from season two) though perhaps a more suitable comparison could be Jules Verne’s ‘gentlemen adventurers’. It’s certainly an enjoyable trilogy, much more straightforward fun than Lovecraft’s cosmic horror.

Have a happy Halloween, everyone!