Some very exciting things have been coming out of FFG over the past couple of days, some of it already announced at GenCon, but some new. Let’s take a look!

To start with, the very exciting news about Under the Pyramids, the new big box expansion for Eldritch Horror. Last year saw Mountains of Madness come out, which brought a sideboard to the game, along with a lot of additional bumph that you can see in my blog here. Under the Pyramids seems to be following that template, with a new board that depicts – unsurprisingly – the Egyptian desert. Two new Ancient Ones, of which only Nephren-ka has been spoiled, along with eight more investigators and a whole host of other new bits. I’m guessing Nyarlathotep will be the second Ancient One, though given the breadth of lore for him in the mythos, he may be better-placed in a box by himself. We’ll see, though.

Hoping we’ll get this for Christmas!

Just announced today is the seventh hero and monster collection for Descent – Treaty of Champions! Looks very much like more of the same, really, though take a look at those miniatures! Those demon lords look absolutely amazing. Interestingly, while I said this was more of the same, there is a new monster group, the Crow Hag! An interesting-looking mini, some strange cultist-like character with a huge mace of some sort… interesting!

Always great to have exciting options for a game, anyway!

Have I mentioned the new cycle for Warhammer Conquest? I’m not sure…  At any rate, the next cycle is expected to begin at some point, and it mainly deals with interacting with the position of planets. Capitalizing on the fact the deluxe expansion, The Great Devourer, will be released by the time this hits, we’ll also be getting Tyranid cards, and the fourth pack, What Lurks Below, brings a new Warlord to the faction. In keeping with the first cycle, it also looks like the Space Marines will be focusing on a new chapter, this time Black Templars. Interesting, as I’d have thought we’d be seeing something like Blood Angels or Dark Angels first. At any rate, I wasn’t actually intending to keep buying Conquest packs after the Warlord cycle ended, but FFG are always so very good at keeping me hooked on their card-crack!

I realise I’ve not mentioned the other big, exciting expansion announced back in GenCon, Return to Hoth! I’ve actually played the skirmish game once, and thoroughly enjoyed it, but have wanted to play more before featuring it on the blog. Anyway, it’s a really exciting game, and Return to Hoth looks like it has some very good additions to this! The miniatures include HK-droids, Wampas, and a Mon Calamari hero, all of which look excellent.

The associated ally and villain packs also look good – Princess Leia, Dengar, and some Snowtrooper chaps, all look fantastic! Interestingly, there is a lot in this box that seems to support the skirmish game, including a four-player variant, which makes me wonder if FFG are keen to support this aspect above anything else. It does kinda make sense, given the opportunity for organised play. The skirmish game is certainly the more popular aspect as far as what I’m seeing locally, at any rate.

Another one for the Christmas list, anyway – all four of these things are coming before the end of the year, anyway. 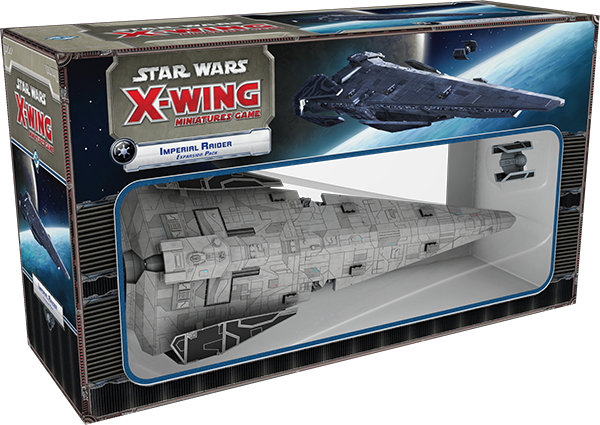 The Imperial Raider is apparently in stock at my local store, though it is so overdue that I don’t think I’ll actually believe it until I’ve seen it with my own hands!