Wow, can you believe we’re on week five of releases for the Age of Sigmar? Well actually, it kinda feels like it’s been longer, but maybe that’s just me! This week has seen some very beautiful releases – let’s take a look…

The big things this week are the new terrain pieces – the Numinous Occulum and the Dragonfate Dais, two kits that are very beautiful, and also surprisingly easy to assemble! At least, they look like they are from the sprues. If you could say the Dais even comes on sprues:

That Dais is also heavy. The scenery kits are surprisingly made in China, and more than any GW kit I’ve seen so far, the density of the plastic, combined with the fact it comes in whole pieces like that, makes it feel something closer to a toy than any of the regular models I’ve seen. The scenery is beautiful, but I was most excited for the new kit of warriors – the Paladins! These are the guys who came in the starter box as Retributors, but which you can also build as Decimators or Protectors, as shown:

They really are such awesome-looking models, and while I’ve only bought one box this weekend, you just know two more will be following soon!

I’ve also bought the re-boxed Dryads set, which had intrigued me when this whole Age of Sigmar thing kicked off and the previous races were reorganised, with the tree people being broken off from the Wood Elves and forming their own race of Sylvaneth. I actually discovered them completely by accident, as I expected Sylvaneth to be a new name for Vampire Counts, but when I saw these chaps I was really intrigued. By the time I’d elected to buy a box, the kit had been withdrawn from sale, but obviously is now once again available in new packaging.

And what glorious packaging it is, at that!

I mentioned last week that I was impressed with how GW are now providing a more useful painting suggestion on the back of the box, and investigating that for this week’s stuff, I was even more captivated by the Dryads – specifically, that blue-tinged dude on the bottom there. All the box art is generally fabulous, of course, but I’m suddenly finding myself obsessed with these tree guys – to the point I may even be convinced to start work on my Durthu that has been languishing at the bottom of my pile of shame for almost a year! 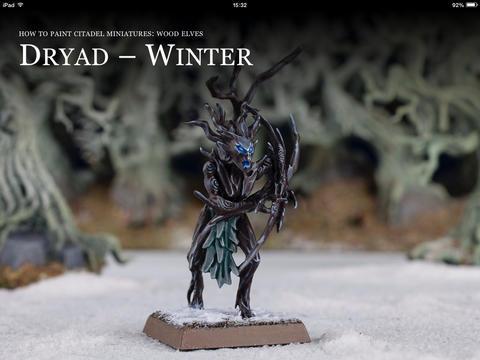 Before I go on, I’d just like to point out that this Monday is the 1 year anniversary since I first painted a miniature – the Beast of Nurgle, which I’d done as a practice piece for Shadows of Brimstone, but which turned me onto this hobby! You can see the blog I wrote about that experience here.

Next week sees the beginning of the Chaos releases for Age of Sigmar, with the plastic kit of Bloodreavers.

I’m actually breathing a sigh of relief here, as I still have little-to-no interest in these guys. Don’t get me wrong, they look great, and I’m particularly impressed to see racial diversity in the studio paint schemes now, but while I find them interesting to look at, I have no desire to buy and paint any of these things. The White Dwarf tease seems to imply we’ll be getting more, also, so yeah – hopefully the month is going to settle down for me now!

Much like the Dryads and Treemen this week, we’re also getting Skaven re-packs next week, which look wonderful, but also have no interest for me. I am a bit bummed we’re not getting Prosecutor kits – hopefully they are still on the agenda for GW, anyway!

I am excited for the new book that’s coming, however. Celestial Vindicators have a wonderful colour scheme, though when I was casting about for mine, I thought it could potentially be a bit too over-powering en masse, but it’s interesting to see them take centre stage in this book, even so far as getting themselves a painting guide. Makes me wonder if my own Lions of Sigmar will also have this treatment in a later installment? Anyway.

One thought on “Age of Sigmar, week 5”