It’s week four in the new releases for Age of Sigmar, and this weekend has seen a fairly small release, just one new kit in fact. The Judicators look amazing, though, so more than make up for that. I went down to my local store and picked up some of them, along with some scenery from last week’s release, and everything just looks so many kinds of awesome, I can’t begin to tell you!

The scenery does look fantastic, as I mentioned in a previous blog, so I’m very excited for that when I eventually get round to it! The Baleful Realmgates come almost as snap-fit pieces, as well, so you don’t need to do any cutting (at least it seems that way). The Judicators follow the Liberators in being very complex models, which should allow for a whole multitude of poses – something I always enjoy with new models! 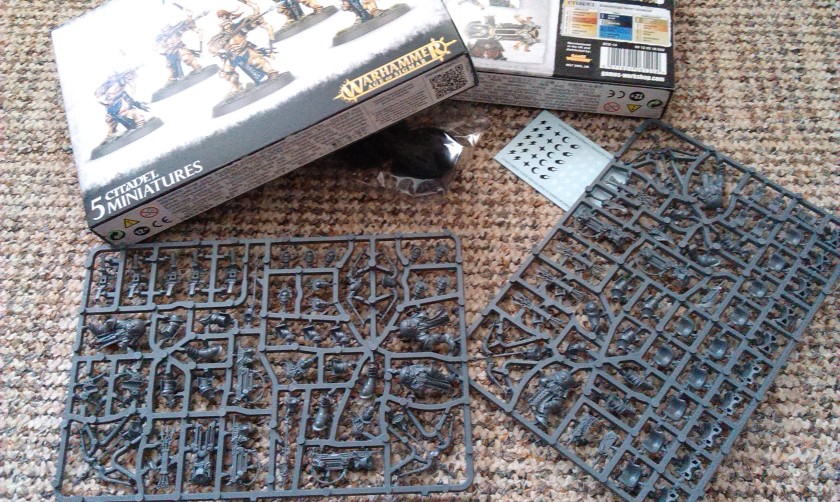 You can also just about see in the picture above a sort of painting guide for the miniatures. I hadn’t noticed this on the Liberators, but it’s a more stage-by-stage approach to their previous painting guides, and obviously still only a suggested guide, but I thought it was a nice touch. That, and rules in the box, seem to all help to make this a really inclusive, easy-entry game.

This week’s White Dwarf has some really interesting bits about the Death faction, too. Nagash and his undead legions evidently survived the Chaos cataclysm in the Old World and are once again running amok. The article was interesting because it mentions a few troop types that I’ve not heard about before, but I don’t think this is anything to do with the rebranding-for-IP-sake issue. Rather, it sounds like the rumours are indeed true, and we’re due more new kits for the other, pre-existing factions. So that’s exciting! If a little scary for the wallet…

Next weekend looks awesome, guys. The new Retributor kit is due, which has five models that can be built as Retributors like the starter game, or Decimators, or Protectors, each of which comes armed in a specific way:

I was excited for the Judicators – and had been for weeks – until I saw the rumours for these new guys. In their official glory, they are superb, and I am inevitably going to be getting three boxes of them to make five of each! However…

I’m really excited for this. I already have a Treelord, having bought it back in October but lacking the confidence to paint it up. However, I find it strangely warming to see that some of the Old World kits retain a special kind of relevance to the new game. I was actually hoping to buy some Dryads when I went to Warhammer World, but they didn’t have any and, as it happened, the whole range had been taken down, only to go back up for pre-order this week in a bigger box!

Finally – more scenery! The quality just continues – that dragon altar-piece, or Dragonfate Dais, looks particularly spectacular! Initially, I was going to try to resist, but lacking any sense of willpower when I walk into a games shop, I ended up pre-ordering £140-worth of plastic awesome. So that’s both the new terrain pieces, a box of Paladins, a box of Dryads, and the new Realmgate Wars book, an anthology of three short stories set in the new Age of Sigmar.

Hopefully soon the Chaos releases will begin, and I can calm down! I’m guessing we’ll have at least one more week of Stormcast Eternals, however, for the winged Prosecutors, so we’ll see what mid-August brings…