Hey everybody!
It’s that time of the week again! Time for another game to come under the spotlight of awesome, and following last week’s look at some of the expansions to the genre-defining Dominion, I thought it was time to take a look at another true juggernaut of the board game world, and bring to this blog a gateway game that, in a lot of respects, started it all. Today is a game day blog with a difference, as we look at Settlers of Catan!

Settlers of Catan is an area-control, resource-management game in the German mould, first published all the way back in 1995. I say “started it all” as its success was unparalleled at the time, seeing worldwide sales rocket and really helping what I suppose you could call the non-traditional board game market really take off globally. Its popularity has been demonstrated time and again by being the only such board game offered for general sale up and down the UK, very much in the manner only previously achieved by Hasbro staples. Anyway!

In Settlers of Catan, you take the role of a settler, aiming to cultivate the land nearby to gain maximum resources, which you use to increase your presence on the island of Catan by building roads and villages, and upgrading villages to cities. The board is made up of a number of hexagonal tiles that can be randomized each game, meaning no two games will play alike. Each hex represents a type of resource you can claim – wood, brick, ore, wool or grain. At the start of each turn, two dice are rolled to determine which hex tiles produce resources, and if a player has a settlement adjacent to any such tile, he’ll get the resource card for later use.

As the rules say, you’ll never gain all the resources you’d ever need simply from generating resources out of your own settlements, and a very big part of this game is the bartering system of trading with your fellow-players. When the game begins, you essentially have two free settlements, but due to restrictions on where these can be placed, you may find yourself blocked by other players, forcing you to always work for your resources. If your fellow players don’t want to trade with you, however, you’re always welcome to trade with the bank, or if you control a coastal settlement, you may be able to trade off-island. This affords the game a tremendous amount of player-interaction, as you all seek to gain resources and, potentially, off-load that glut of wood or wheat for the more lucrative ore you need to build your city. 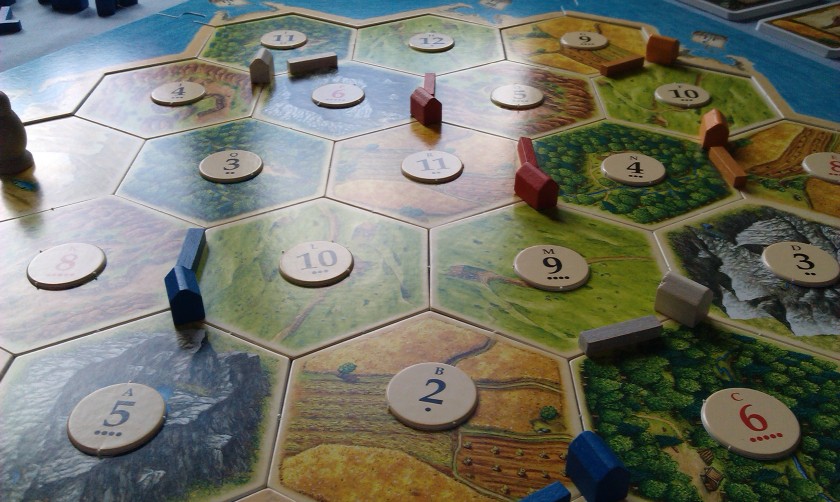 While there is technically no hand limit, a roll of a 7 will activate the Robber, who is moved to a tile to prevent it generating resources – if a player has more than seven cards in hand he must discard half of his hand. Furthermore, the player who moves the Robber can steal a card from a player with a settlement adjacent to the Robber’s new tile.

Robbery can be prevented by the use of the Knight development card. The development deck has a variety of other cards that grant several in-game effects, such as the Monopoly card that allows a player to claim all cards of one resource type from the other players. Development cards are bought with resources much like settlements and roads, and can be a viable strategy to gain victory bonuses, for example having the largest army. When a player reaches 10 victory points, the game immediately ends.

A large number of expansions have been released for the game, such as Seafarers, where you explore a board made up of smaller islands; Cities and Knights, where you must work together to fend off barbarian invasion; Traders and Barbarians, which features a number of smaller scenario-based expansions and includes the official two-player variant (which basically uses two ghost-players). Two years ago, a second scenario-based expansion was released, Explorers and Pirates. In addition to all of these, there have been a host of re-skins of the game, from the historical series to Star Trek Catan, and card game and dice game alternatives are also available.

But here’s the thing, guys: I hate Catan. Actually, hate is a pretty strong word here – I dislike the game, quite a lot. Normally when I feature a game here on a game day blog, it’s a game that I have in my collection and one that I love, but this one is just awful. I first played it years ago with the ex-girlfriend, and we were actually both pretty ambivalent about the whole thing, but when it was featured on Tabletop a few years ago, I convinced myself to try it again, and bought the game, but couldn’t convince anyone to play with me. So I downloaded the app, and played a lot of Catan that way. I was learning the ropes, and it wasn’t all that bad – maybe we had been hard on it, back in the day. Heck, I even won a game! Finally, with all my experience on the app behind me, I brought it to the table nearly two years ago with some friends, and we played what I would consider my first real game. And it was awful. I was teaching the others to play, so we were going through it pretty casual-like, building settlements and roads, and all the rest of it, but it just ended so horribly that it soured us all towards the game, and I’ve never wanted to go back.

A big part of this is the fact that development cards are kept secret until they are actually played. No big deal in and of itself, as a lot of games have cards with a secret knowledge mechanic. Heck, pretty much all card games play like that! But when someone can just spring their Victory Point cards on you and basically claim victory out of almost literally nowhere, it leaves a pretty sour taste in the mouth for everyone at the table. I actually won that game we played, and I felt like a bastard for it – people were building their settlements and their cities, and felt like they were on track for a win, when I played my cards in very much a “oh, and by the way, I’ve just won” manner. It just really sucked.

This has also happened with pretty much all of my games with the app, too. You’re there, building your board-presence, watching what the other guys are doing, wondering if that hand of six development cards is just six knights, you build your city, you feel like you’re on track, the other players don’t have as many victory points on the board as you, but then – out of nowhere, the game is over and you’ve lost. It feels so damn arbitrary that it’s almost worth taking those VP cards out of the deck. But, while I may sound like an entitled arse for saying so, I don’t think it’s up to me to balance a game I’ve paid money for.

I’ve since sold my copy of Settlers, wanting nothing more to do with it. It’s just not a game that I find enjoyable, so was taking up valuable space in the game room that I could devote to others.

Have you played Settlers and loved it? I’d love to hear your experiences with the game!

3 thoughts on “Settlers of Catan”