Hey folks!
It’s Tuesday, so it’s game day here at spalanz.com! Today, we’re taking a look at some of the expansions to that behemoth of a deck-building game, Dominion! There are lots of these, of course, so I’ve decided to split the expansions into two groups, so we’re going to start at the beginning! 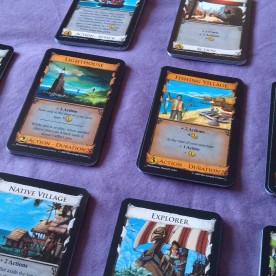 Dominion came out in 2008, and after a second core set, Intrigue, was followed by its first proper expansion in 2009, Dominion: Seaside. This is actually a great expansion, as it takes care of some of the principal weaknesses of the base game. Firstly, it brings in Duration cards that are orange in colour, and are played into your play area as normal. However, they provide an action for you next turn as well as this one, so it allows you to form more of a strategy for what you’re going to do. Secondly, there are cards that allow you to set cards from your hand aside, in particular the Island card that allows you to set aside it and another card for the duration of the game. This is particularly good for deck efficiency in keeping victory cards out, while still allowing them to count at the end of the game.

Overall, Seaside is a really strong expansion to the game, and you should definitely consider picking this one up if you’re a fan of the base game! 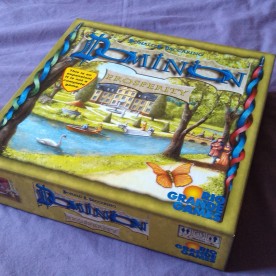 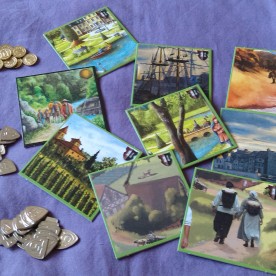 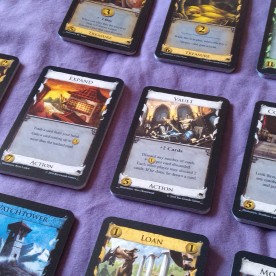 Seaside was followed by Prosperity in 2010. The second big-box expansion, Prosperity is all about the big money. Big Money is a common strategy in Dominion, of course, where the objective is to convert all your copper to lots of gold, which will allow you to buy up all the Provinces and win the day. Prosperity works with this by having a lot of expensive cards, including the more expensive Colony victory card, but it also has a lot of interesting Treasure cards anyway, such as Contraband that gives you 3 gold and allows you to make an extra buy (but the player to your left determines what you can’t buy). Counting House is actually an interesting card when working within the Big Money strategy, as it almost encourages you to keep those Copper cards in your deck.

Both of these expansions come with metal coin-like tokens, which really excited the nerd in me, as so many games like these have cardboard tokens for such things. Prosperity also includes victory point tokens, because there are a few Action cards like Monument, which will give you +1 VP token when you play it. 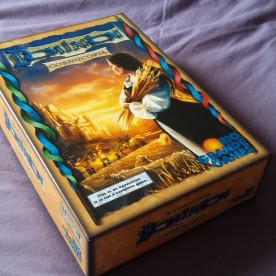 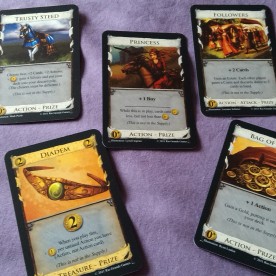 Cornucopia came out shortly after Prosperity, and is a more small-scale expansion to the game. The main mechanic here is that some cards will give you bonuses for having different cards in your hand or deck, such as Harvest, which gives you money for each different card on the top of your deck. There are also the five Prize cards, only one of each is included in the game. They come into play with the Tournament card, where you gain a Prize for revealing a Province from your hand. They have some fairly interesting abilities – certainly, they’re useful – and it’s nice to have something that rewards you for having Provinces in your hand (meaning playing with the Islands from Seaside might lead to some interesting decisions).

Finally, let’s take a look at the five promo cards available for the game!* Out of all of these, my favourite is the Walled Village card, which was released at Origins 2011 to celebrate the 10-year anniversary of Carcassonne winning the Spiel des Jahres (the original German-language card is actually named after the French town). Its effect is a little too specific, if I’m honest, but it’s just the fact that it’s Carcassonne, y’know? Awesome times!

All of these expansions are really good additions to the line, providing a lot of more of the same while also introducing new strategies and a couple of extra mechanics. Dominion remains a very straightforward deck-building game, and these expansions manage to enhance the experience while at the same time keeping the gameplay fairly uncluttered and clear. I must admit, I’ve not played with multiple expansions, but the basic rules for choosing kingdom cards will mean that your games will never get truly complicated, allowing you to enjoy the game for its own sake, rather than providing an exercise in remembering rules. In this respect, they continue the tradition of German games being among the most clear in the world.

However, I kinda like the complexity that US designs have added into the deck-building mix. Dominion is actually fairly abstract, and while it can be a very rewarding experience to set up the perfect chain of action cards that allow you to do all sorts of shenanigans on your turn, ultimately I find it can be a bit stale after just one or two plays. Other deckbuilders, particularly Thunderstone and Marvel Legendary, have an actual gameplay mechanic, where you’re building a deck for a specific purpose, and I’ve become such a fan of these types that the pure deck-building of Dominion seems somewhat lacking. It’s great to come back to every once in a while, but I wouldn’t honestly say it’s something I love, even with expansion goodness added in.

So there you have it, my first-look at some of the Dominion expansions available. Not sure when I’ll get to the next lot, but hopefully it’ll be soon. At any rate – if you enjoy the base game, you’ll pretty much enjoy any of these, as they all work great with just the base game alone, offering new and exciting opportunities and combos that are definitely worth investigating!

*The promo cards are available through the boardgamegeek store, and there are actually now six such cards – the Prince came out in June last year.

2 thoughts on “Prosperity at the Seaside!”